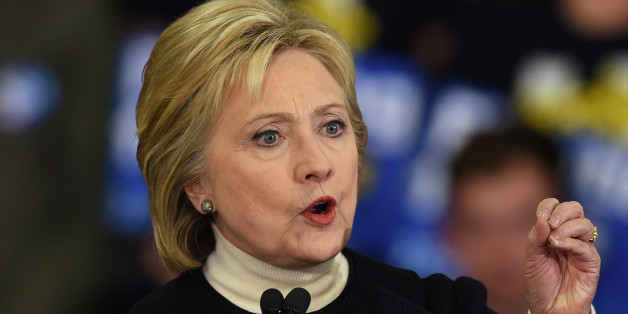 I’m not sure why the Hillary Clinton campaign is sending me their LGBT related emails (I’ve never solicited this), but it seems as if I’ve been put on her press list. Today I received this: 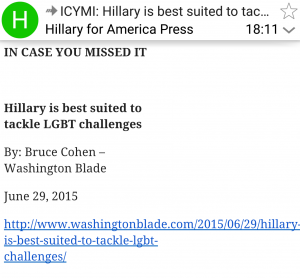 It’s an email from the Clinton campaign, reminding us that Clinton is the candidate best suited to tackle “LGBT” rights. In case the campaign needs a lesson on what the LGBT acronym means:

The post the Clinton campaign is promoting is from longtime Clinton supporter, Bruce Cohen. Cohen starts off well:

“June is Pride month. It’s a time to celebrate the impact that our brothers and sisters in the LGBTQ community have on this world. This time is also a constant reminder for me and my husband, Gabe, of the friends we have lost over the years and all the work that still needs to be done to ensure that each and every one of us has the opportunity to live our lives free from discrimination.”

Cohen includes the Q in his piece. This piece is going to be the most progressive LGBT campaign post ever! Right?

“Hillary has fought for LGBTQ rights, called for an end to discrimination based on sexual orientation, and worked tirelessly to ensure that everyone has the opportunity to fulfill their potential in this world.” [emphasis added]

I spy, with my T person eye, a key phrase missing from the sentence. Gender identity isn’t mentioned at all. Maybe Cohen will correct his mistake?

“Almost 25 years ago, Hillary Clinton met with some of my friends at AIDS Project Los Angeles, many of whom were suffering from HIV/AIDS. Hillary was one of the few public figures at the time to join our community in the fight against the spread of that deadly disease. Since then, I have followed her career as a public official and have watched her tackle issues that most politicians have long ignored.”

Hmmmmm, what issue have most politicians ignored, even in the “LGBT” policy arena? This isn’t the first time I’ve documented Hillary Clinton’s silence on transgender rights. In the 2008 campaign, Clinton said very little about supporting “gender identity” in legislation, much less her campaign’s inclusion of transgender rights. Cohen opines:

“In the Senate, Hillary fought to lift restrictions that blocked gay and lesbian couples from adopting children, she spoke out against “Don’t Ask, Don’t Tell,” and she repeatedly called for passage of the Employment Non-Discrimination Act to prevent discrimination based on sexual orientation in the workplace.” [emphasis added]

In 2008 the former Human Rights Campaign transgender board member, Donna Rose, said on her blog:

“It’s nice to see that some of our input finally seems to be sinking in although I’d be remiss if I didn’t share that a large group of LGBT steering committee supporters is floating a string of emails in the background recommending that she use the term “gay and lesbian” instead of GLBT when talking to broader audiences. Needless to say, I’m not on board with any terminology that leaves us out.”

If this post that is put forth by the Clinton campaign is any indication, that recommendation is still in force. Cohen continues:

During her time at the State Department, Hillary Clinton made history as an advocate for the LGBTQ community, not just here in America, but throughout the world. At a speech in Geneva, Switzerland to celebrate International Human Rights Day, Hillary made a bold declaration that showed us in the gay community and leaders all over the world her true dedication to the cause: “Gay rights are human rights, and human rights are gay rights.” Those words may seem simple, but they were historic and had a profound impact on me and the LGBTQ community, and they will continue to do so for years to come.

It’s important to note that both this statement and the State Department’s change in trans passport regulations happened under the Obama administration. As I’ve stated before, Obama has been a “fierce advocate” for transgender people and that advocacy goes all the way back to Illinois with his sponsorship of SB2597 that amended the Illinois Human Rights Act to include gender identity and sexual orientation. Clinton has no such bonafides outside her time at the State Department under the Obama administration.

“There is no doubt in my mind that Hillary Clinton will build a better future for all Americans, free from discrimination and prejudice. That’s why I’m supporting her for president.”

There’s certainly doubt in my mind. In 2008 Vanessa Edwards Foster put it this way:

“One thing that is for certain: a vote for Sen. Clinton may as well be a vote for HRC and it’s incremental and non-egalitarian approach to equality.”

From the sound of Cohen’s post, the song remains the same.