In the past week or so I’ve noticed increasing heat (see also: infighting) from the supporters in the GLBT Clinton camp. Tuesday they pointed towards Hillary Clinton’s “fully inclusive” ENDA statement as a sign that Hillary is a more GLBT inclusive candidate than Barack Obama. I unexpectedly found an example of this kind of rhetoric from Nancy Nangeroni (of Gender Talk fame). She included the text from Hillary’s statement to the GLBT community that included her support to:

pass the Employment Non-Discrimination Act and assure that they are both fully inclusive of sexual orientation and gender identity and expression.

But that wasn’t the original statement. Over at Ourchart.com Hillary’s post was edited: 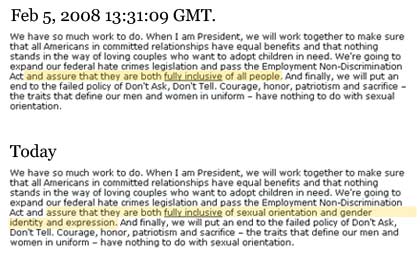 The first inclusion statement was so ambiguous, you could insinuate inclusion of the Rockettes, the New York Giant’s offensive line, or the Cher Impersonators Local 237. But the big shocker is that the language of the re-edit goes even further than the transgender inclusive ENDA bill (HR. 2015) or it’s stunted orphan GENDA (HR. 3686) that was never voted on in the House.

the gender-related identity, appearance, or mannerisms or other gender-related characteristics of an individual, with or without regard to the individual’s designated sex at birth.” – HR 3686

Gender identity or expression, on the other hand, is defined as:

Could it be that Hillary Clinton is really Glenda The Good Witch?

Some of my colleagues, some of my friends, I say to my colleagues in the gay community, maybe I will do a little stereotyping, maybe they have seen the Wizard of Oz too often. They seem to have Speaker Pelosi, a wonderful dedicated, committed supporter of human rights, confused with Glenda the good witch. They think if she waved her magic wand she could somehow change things. – Barney Frank 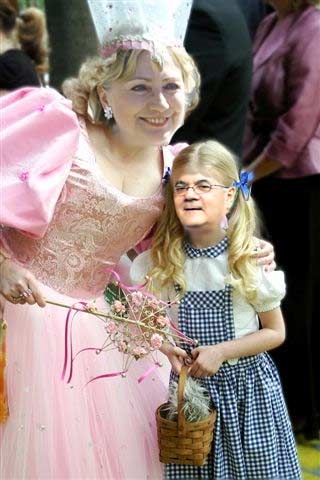 Call me Elphaba, but I’m not much on “good witches” or fairy tales. If Hillary is for “gender expression”, one has to wonder if she’ll oppose HR 3685 when it comes up for a vote in the Senate later this month.

Nangeroni ends her post at Gender Talk by saying:

If Nangeroni would have visited BarackObama.com she’d see Obama’s PDF on GLBT issues:

Fight Workplace Discrimination and Promote Rights
Obama believes the Employment Non-Discrimination Act should be expanded to include sexual orientation and gender identity.

This document was created on 10/11/07. It’s nice that Hillary’s finally come on board to support transgender people in February 2008, but it’s disingenuous to claim Hillary’s got one up on Obama. One only need look at what Clinton said in May of last year to see how each compared on the gender identity issue:

Clinton: As president, I will sign the Employment Non-Discrimination Act (ENDA) into law.Throughout my Senate career, I have been an original co-sponsor of ENDA. It is inconceivable to me that people who work hard and do a good job every day can still be fired because of who they love. It ‘s unfair, it’s un-American, and I will put a stop to it once and for all.

You can view HRC’s Presidential Questionnaire found here (for Hillary) and here (for Obama).

If you’re going to spout rhetoric, research that of which you speak. If you fail to, you end up looking like a liar or a fool.