Recently Rebecca Juro wrote a post at the Advocate called “No, Obama’s Executive Order Is Not a (Total) Win” that I find extremely short-sighted and politically naive.  Soon after the election in 2008 of President Barack Obama, many started to question President Obama’s claim as a “fierce advocate” for the LGBT community. I have my issues with the President (mainly on issues of privacy and his use presidential power). But in realm of LGBT advocacy, he has lived up to his claim of “fierce advocacy”. In terms of lesbian, gay, and bisexual issues, he has:

but his administration also done quite a bit to help everyday transgender Americans:

and that’s just a small example of the advocacy this President has put in place for the LGBT community.  Juro’s comment that:

“It’s the one thing I’ve never understood about Barack Obama and his administration: How can Obama and his spokespeople talk like they fully support LGBT equality but then spend years dragging their feet implementing one of the easiest forms of LGBT progress to bring about? Why wasn’t this executive order signed into law the day after Obama took office? No one seems to know.”

seems to be free of any kind of acknowledgment or analysis of political reality. Any comparative analysis of previous presidents, even taking into consideration the political climate, shows that Obama is (by far) our “fiercest advocate”. In fact, he’s much more trans-inclusive in his policies than many so-called “LGBT” organizations. He’s actually HIRED a trans woman  to an important administrative post. How many in the LGBT orgs in the non-profit sector can make that same claim?

“We want it all and we want it now. And we demand political leaders who understand that we are as entitled to that as any American who takes their own civil rights for granted. It’s what being a real progressive is about. Anything less isn’t justice, and it isn’t equality.”

If she wants a “real progressive” in office, maybe Juro might consider doing some of this: 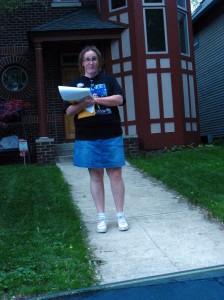 (a trans activist out canvassing neighborhoods for political candidates)

Instead of just squawking about what the President hasn’t done, maybe she might try getting out and working for progressive candidates?

Political gains aren’t something that happens in one big chunk but in a piecemeal fashion. No civil rights movement has ever just came in and demanded rights, but they’ve worked to get them. In the trans community, it happens because of the political groundwork of people like Diego Sanchez and Barbra Casbar Siperstein on the national level and Kathy Padilla, Jenna Fischetti, and many other trans* individuals on the local level working with (and for) politicians to secure trans protections.

The fight is far from over, but to claim this isn’t another great win from a “fierce advocate” is to ignore/deny history. This Pride month I’m celebrating all our victories, and I’m grateful that Barack Obama is our President.

Go head and admit it, Obama is our “fierce advocate”.