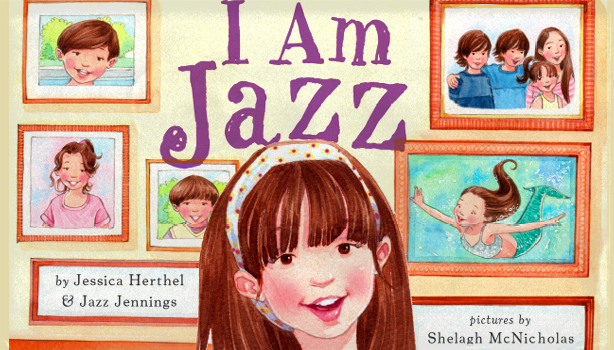 Jessica Herthel and Jazz Jennings recently published a book for trans kids titled, I Am Jazz. The beautifully illustrated story is based on the real-life experiences of Jazz. Laverne Cox said that the book is an “essential tool for parents and teachers” and that “I wish I had had a book like this when I was a kid struggling with gender identity questions.”

I had an opportunity to both review the book and interview one of the book’s authors.

Cristan Williams: How did you become involved in this project?

Jessica Herthel: I’m the parent of three little girls. I’m heterosexual, cisgender and none of my children are trans. I consider myself to be a devout ally to the LGBT community and it was important to me and my husband that our children be allies as well. It wasn’t until my children began going to school that I realized that my message of respect and inclusion for all was getting a little muddied by the very traditional ideas of family that the kids were getting from school, where more diverse families were not represented.

That motivated me to get involved. I began volunteering in my local school district. I was able to do some consulting work around developing a handbook for principals and administrators who were encountering more and more LGBT issues every day. It was through my work there that I met some people who were serving on a community committee to ensure the safety of all students and that’s where I met Jazz’s mom, Jennette. She and I became fast friends.

She mentioned that her family was going to be on 20/20, being interviewed by Barbara Walters, and I raced home to DVR the interview. My children came in while I was watching it and we talked about it when the segment was over. My youngest daughter was four at the time. I made it really simple and said that Jazz is a girl on the inside regardless of the shape of her body, and my kids seemed to get it.

A few months later my daughters met Jazz and we all went out for ice cream. Jeanette and I were amazed by how quickly a 4-year-old was able to move past the trans issue. Jeanette and I began talking about the need for a tool that is very simple and very straightforward, both for parents who consider themselves to be an ally and want their children to understand what trans is, and also for schools that are encountering trans issues. We realized that there wasn’t a tool available for people who were having this conversation for the first time with kids, written in very simple terms.

I am Jazz is told in the first person and was created by using Jazz’s YouTube videos from when she was 6 and 7 years old. We wanted it to be from the perspective of a very young trans kid who was confident and comfortable with who she was. We basically transformed those early videos into this first-person narrative in which Jazz explains what it is to be transgender and that it’s nothing to be afraid of and that it’s nothing to be ashamed of.

Now we’re getting interested from school districts and libraries that recognize that this is a good tool to have – even if they don’t need it right this minute; it’s good to have it in elementary school libraries across the country.

Williams: Well, this being the TransAdvocate, we have to get into the weeds of addressing the likely claims of detractors. There is something called horseshoe theory. It basically says that the far extremes of both the right and left wing will sound a lot alike and this theory seems to hold true in the anti-trans world. I have a quote from a far-left wing source and I’d like you to respond to it as someone who is creating tools to help trans kids:

“Children are diagnosed with ‘gender identity’ disorder as a result of engaging in socially unacceptable behaviour, specifically behaviour considered unsuited to the child’s biological sex. As such, I argue, the transgendering[1] of children should be understood as a project of social engineering that has similarities to the practice of sexual surgeries that were carried out on persons seen as engaging in socially unacceptable behaviour in the previous era of eugenics.” – Sheila Jeffreys, Gender Hurts, p 128

Herthel: My background is that I’m a lawyer, I went to Harvard; I’m very much an analytical thinker. A statement like this, it seems to be a conclusion that’s been drawn in an academic setting without ever having spent time around a 2-year-old trans kid.  What I’ve learned being around Jazz and having studied her life is that when Jazz was two, she was correcting her mom when she referred to her as a male. She would say, “No, mama. Girl.”

There was no hidden political motivation about it. This wasn’t about rebellion or protest.  And this certainly wasn’t the parents’ idea. Jazz was the fourth child. The family already had two boys and a girl. It wasn’t like she was the fourth boy and the mom was desperate for a girl; there was a girl already in the family. When you see how organic this young child’s expression was, you need to rethink accusatory claims that this is child abuse or that this is the parents imposing something on a child who’s acting ‘inappropriately.”

Any time this topic is in the news, you get people speaking like experts when the reality is that they have no hands-on experience; they’ve never connected with a young trans child who is just speaking his or her truth. And that’s what the message of the book is. There is a message for the kid, which is speak your truth, be who you are, no matter what; and one for the adults, which is love the kid that you were given, not the kid you thought you were going to get. Williams: You talked about Jazz expressing herself at two and I think that sometimes people like Jefferys forget that communicating expressions of self doesn’t only happen on a verbal level. As trans kids grow and mature, of course, they are going to find, develop and utilize non-verbal forms of communicating their experience of having an embodied self in the same way their cisgender peers do. That trans kids do this isn’t evidence of a nefarious eugenics conspiracy; it’s merely evidence of kids communicating selfhood in the manner kids normally do.

Herthel: Right. Throw in the “it’s just a phase” argument and you’ve hit most of the claims people like that make about trans kids. But for these kids, it’s just about being their authentic self and us adults need to respect that. Whether it’s a kid is coming out as trans or gay or whatever else – when a kid speaks about something that is fundamental to who they are – as adults and parents, we need to set aside our own stuff and try to listen to what they have to say. It’s what I try to do with my kids and I think that’s what Jazz’s parents try to do too.

Williams: You’re the one being a public contact for this project. I’m sure you’re going to be faced with some similar accusations – maybe not going so far as to say that you’re part of a eugenics-like conspiracy – but, I’m sure that you’re going to be faced with some well-meaning people who think they know all there is to know about Jazz and children like Jazz. But, then there’s also some real hate situated around this topic too.

Herthel: Sure, I do worry somewhat about the inevitable backlash.  But I take great hope in the thought that things are different now than they were when Jazz was first on TV nearly a decade ago. I think that people like Laverne Cox and Janet Mock have really pushed the public consciousness on these issues – and I’m hoping that things have gotten a little bit better, that understanding around transgender issues is on the rise.

Williams: I’m in Houston and we worked really hard to get a trans-inclusive nondiscrimination policy place for the school district, and that happened after years of work. A big piece of the political rhetoric against that equality measure was that such policies allow male kids to claim that they feel like a girl today and therefore get to shower in the girl’s locker room. They would also claim that trans kids are actually sexual deviants. How would you respond to those types of claims?

Herthel: Again, as an attorney, I’d say show me the facts. Show me the schools where trans kids are sexually assaulting cis kids or where boys get to claim that they’re trans today and get to shower with the girls. The data simply isn’t there.

Williams: Let me tell you, at five years old, had there been a book like this around, it would have made all the difference in the world for me. What are your hopes for this book?

Herthel: Thank you for that.  The book was just published and we’re starting to get feedback from families with trans kids and the messages we’re getting is that when these kids read it, they feel joy.  Not only does the book validate them – they now know they’re not alone – but it also gives them language to explain what they’re feeling. My hope is that this will help kids know that they’re okay and that they don’t have to go through years of suffering.

[1] Changing people into verbs is a favored tactic of anti-LGBT groups. One way anti-LGBT groups subtly present being gay or trans as a lifestyle/behavior is by adding -ing to terms, creating nonsense words like “gaying” or “transgendering.”

Those of you who enjoyed this article about trans kids might also enjoy Debi Jackson’s article about being a mom to a trans child. She also discusses dealing with TERF hate directed at her and her family.