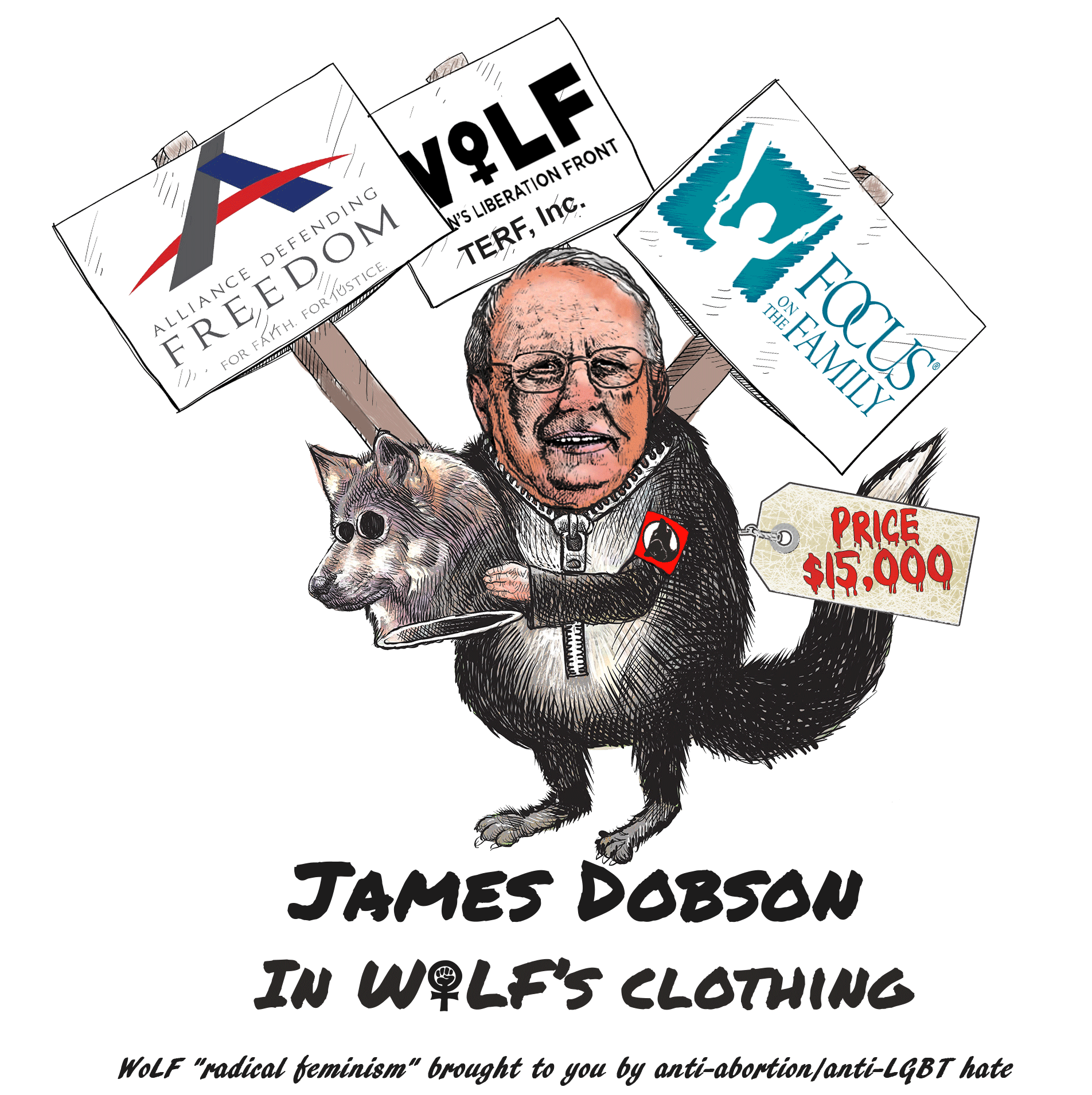 The Women’s Liberation Front (WoLF) is a supposedly radical feminist activist group which, as noted by Pink News, shows “little evidence of campaigning on any women’s issues unrelated to transgender people”. They claim to “lobby for pro-choice legislation” and for “women’s autonomy”, but somehow evidence of (or calls to) action for such purposes are completely absent from their website (archived here so you don’t have to give them pageviews) outside that vague mission statement blurb. What you do see, however, is a lot of collusion with not-exactly-feminist-friendly right-wing media which is interesting when you realize where their funding comes from.

The anti-LGBT Religious Right has been actively synchronizing their message with and adopting the terminology of anti-transgender feminist academics for a few years now. The goal is to divorce their position from the stodgy backward-seeming prudish views that they believe lost them the culture war on gay marriage and adopt a language and message that will more easily infiltrate and divide progressive circles. This sparkly modern makeover is one activists like WoLF are more than happy to provide. The Religious Right has been consciously shifting their position away from gay marriage towards transgender rights since the 2014 Southern Baptist Conference. Despite their deep belief that family values are threatened by “feminism, gay rights, and trans activism”, Religious Right Groups like the Family Research Council have gladly latched onto anti-trans statements by gay congressman Barney Frank and the academic work of anti-trans feminist academic Janice Raymond to bolster their position. It’s classic wedge-issue strategy.

Let’s get back specifically to WoLF, however, who received a $15,000 grant from Religious Right group Alliance Defending Freedom and collaborated in a joint countersuit with Family Policy Alliance in opposition to Gavin Grimm’s now delayed Title IX suit. This isn’t a secret. A November 5, 2016 email to supporters described the former as follows:

“WoLF Board member Kara Dansky applied for and received a $15,000 grant from the Alliance Defending Freedom, a group of conservative lawyers who are representing states and parents in lawsuits similar to ours across the country. Also pretty darn phenomenal.”

As far as the latter, it was bragged about in a recent press release: 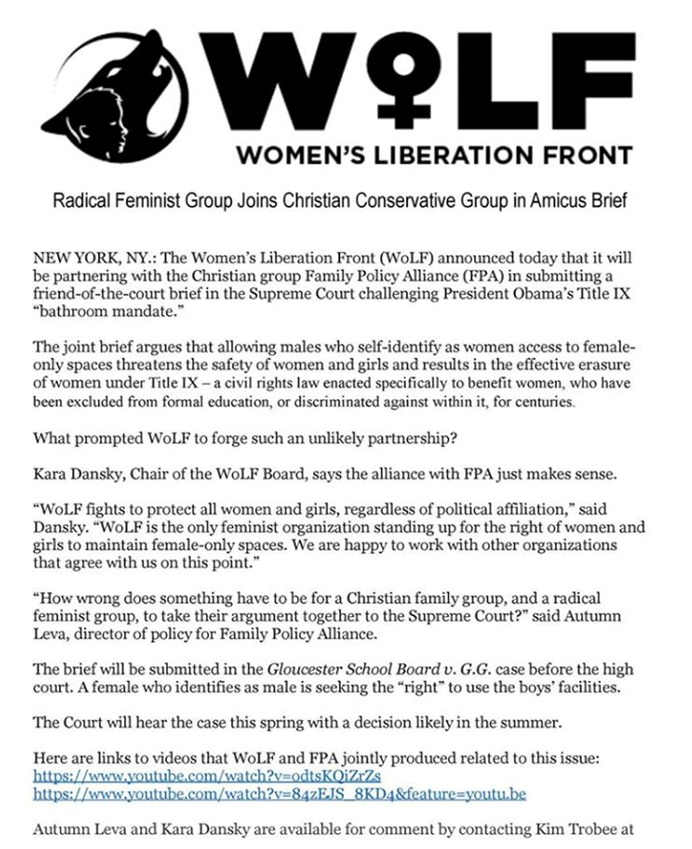 Alliance Defending Freedom is a huge Religious Right evangelical Christian non-profit law firm which, quote, “seeks to recover the robust Christendomic theology of the 3rd, 4th, and 5th centuries.” Nervous yet? Because that is completely bonkers. The firm has become a massive force for years now in helping develop and hammer out “religious freedom” legislation, seeking to bypass any LGBT employment, housing, medical or public accommodation protections through a “religious belief” exception clause. They literally consider the act of refusing service to LGBT folks as a form of civil rights activism not unlike that of Rosa Parks. This firm, which Women’s Liberation Front received funding from, literally advocates the return of sodomy laws, which we should remind you were only struck down federally in 2003.

And we are just getting started, y’all.

Alliance Defending Freedom was founded by James Dobson and Alan Sears. James Dobson may sound familiar to some of y’all following anti-LGBT legislation, and we will get to him in a second. Because holy crap there is a lot to get to with him. But let’s talk about Spears for starters.

And James Dobson… where do we begin? James Dobson advocates murdering trans women attempting to use the restroom. He claims proponents of gay marriage are literally Hitler. That’s probably a good start. He’s the founder of the group Focus On The Family, also known as Family Policy Alliance, as in WoLF’s partners in the Gavin Grimm counter-suit. This group also advocates gay conversion therapy, changing immigration laws to deport LGBT refugees back to countries that will torture, jail or execute them, and is dedicated to undermining abortion laws and restoring 1950s-style family values.

So, we are pretty clear that Women’s Liberation Front is actively working with groups with goals absolutely opposed to anything feminism should support right?

Ha ha ha ha you wish we were anywhere near done yet.

On January 12, 2017, leaked WoLF board meeting notes came to light (not linking directly to a TERF website, sorry) that have made even other anti-trans feminists concerned. The notes are as follows:

“The board voted unanimously to engage Imperial Independent Media to fundraise for WoLF on a 20% commission basis, and to authorize Natasha to enter into a contract for these services on behalf of WoLF.”

Imperial Independent Media is run (according to related LinkedIn profiles) by a man named Zachary Freeman, a Focus On The Family-related activist who was most recently in the news over a lawsuit to gather and distribute names of employees at abortion clinics by having them turned over to the Religious Right anti-abortion activist group Center For Medical Progress. The Center For Medical Progress recently had 15 felony charges filed against them for invasions of privacy and illegal recordings made of abortion clinic employees. These recordings were used in sting videos to propagate the completely debunked “fetal-tissue sale” meme that weighed heavily in arguments to defund Planned Parenthood the past year.

This is distinctly important to note because Freeman/Imperial Independent Media has entered into a commission-based agreement with each other. The fundraising activities of one will financially benefit the other.

This is not the first time TERFs have worked with anti-feminist/LGBT groups in targeting transgender kids. In 2014, TERF attorney, Cathy Brennan and her “radical feminist” organization worked with the anti-abortion/LGBT group the Pacific Justice Institute (PJI) in targeting a 15-year-old trans girl, resulting in the youth being placed on a medical suicide watch.

If you can stomach it, you can read what TERFs themselves claim their aims and goals are at TheTerfs.com, a watchdog site that monitors the anti-trans hate movement representing itself (not infrequently, to mainstream media) to be radical feminism itself. 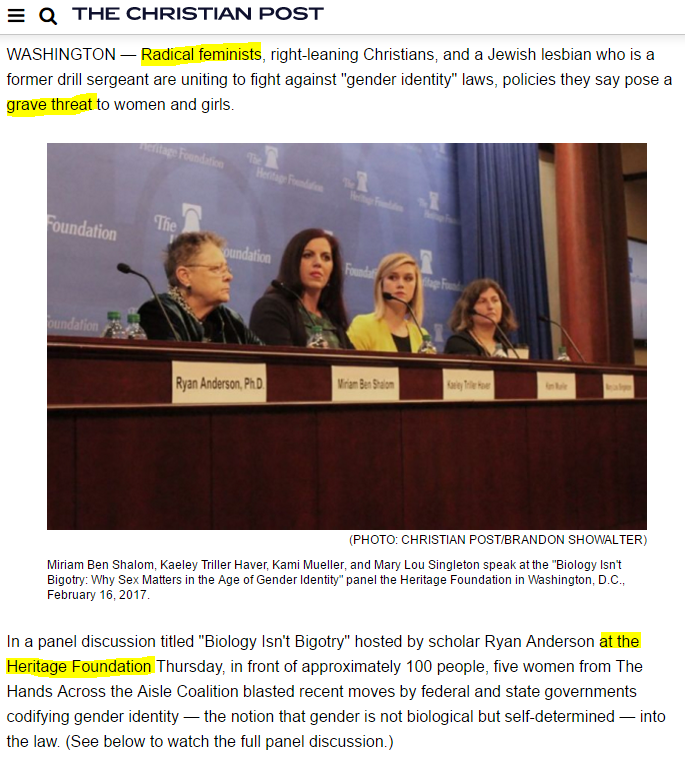 The Trans Exclusionary (self-identified) “radical feminist” lawyer Cathy Brennan sent, via her attorney, a cease-and-desist letter, asserting that the following statement from the above story is false and must be censored removed:

This is not the first time TERFs have worked with anti-feminist/LGBT groups in targeting transgender kids. In 2014, TERF attorney, Cathy Brennan and her “radical feminist” organization worked with the anti-abortion/LGBT group the Pacific Justice Institute (PJI) in targeting a 15 year old trans girl, resulting in the youth being placed on a medical suicide watch.

See the fact check and read the cease-and-desist letter at the following TransAdvocate article:

Rani Baker
Rani is the frontperson of Destroyed For Comfort, Managing Editor of Harlot Media, gamedev of alt-game titles like Never Go To Work and retro game enthusiast. Probably writing about something pop culture related. Once had a Tumblr post reach 40,000 notes. Has a reputation, for good or bad.