This is a review of the way a single story is handled by two diffident tabloid newspapers. The sensationalistic reporting style is so starkly different that I thought it would make an exceptional case study for the dos & don’ts of trans reporting (even when it’s tabloid reporting).

DO – From the New York Daily News: 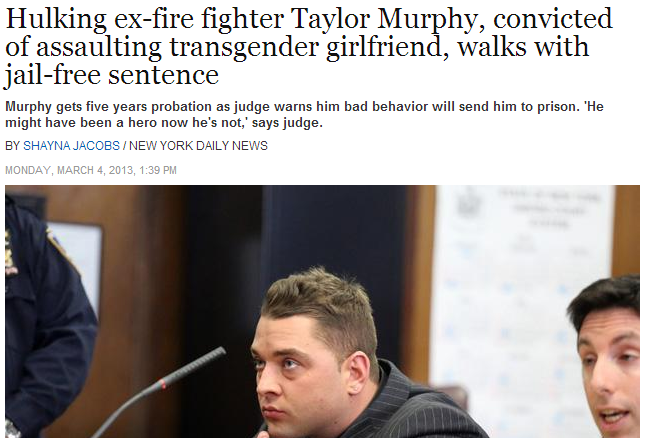 A hulking ex-firefighter accused of violently attacking his transgender ex-girlfriend walked away Monday with a jail-free sentence for the 2011 melee.

In December, Taylor Murphy, 29, was acquitted of felony strangulation and witness tampering charges, but was convicted of misdemeanor criminal mischief and assault, and felony criminal contempt for violating an order of protection when he contacted Claudia Charriez more than 1,000 times after the blow-out. 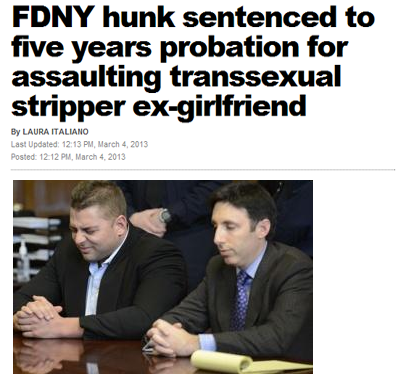 Don’t glamorize the criminal while mocking his victim

A beefy FDNY calendar boy with a weakness for glamorous transsexual strippers was sentenced to five years probation today for assaulting and then continuing to compulsively contact one of his exotic she-male exes.

Taylor Murphy, 29, had last come to court with a towering replacement transsexual stripper on his arm, but arrived at court today with a pretty, biological gal-pal at his side instead — a platonic, childhood sweetheart, his lawyer explained.

In categories:Best of TA Cristan Williams Opinion
Tags:Fox News in the media media
Next Post

I’ve been meaning to post this for a while now, as an explanation and reference for what I’ve been calling FAAB-mentality (described below). I originally wrote and performed this piece for the fourth annual installment of Girl Talk: A Cis and Trans Woman…
Read
Previous Post

From PixelPulse Magazine: When The World Professional Association for Transgender Health holds its biennial symposium from Sept. 5-8 in the U.S., there's a chance participants will be discussing what sort of role a unique environment like Second Life could play…
Read
Random Post

What Chad and Amiyah Can Teach Us About Respecting Trans Women

TransGriot Note: Interesting article from one of the people I had the pleasure of meeting during OUT on the Hill last year, Anti-Intellect, concerning the ignorance bubbling up once again in the Black gossip blogosphere concerning this recent photo Chad…
Read
Random Post

I've been keeping tabs on the continuing drama between Gina Grahame vs. Calpernia Addams and Andrea James and it's getting pretty ugly. The argument seems to have blown up after an email that Grahame sent TYFA Concerning James' work on…
Read
Random Post

A Ray of Hope

I happened upon this post today. I often struggle often to reconcile my feminism with my transgenderism, and these commenters give me hope. Hope for a better world filled with more understanding, tolerance, and love.
Read