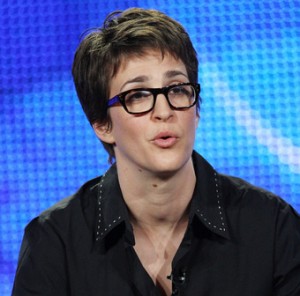 What would you say if I told you that right-wingers on Facebook were throwing transphobic, misogynistic slurs around like this:

“Whoopie should have held her down and Joy could’ve bitch slapped her. Can’t stand Maddow.”

“That horse faced wench needs to put a stopper in that pie hole.”

“… Maddow isn’t a woman. It incubated, popped through someone else’s chest and somehow learned to speak.”

“If she weren’t so sadly skinny, I’d think she was Ed Shultz in drag.”

“Someone should punch that man.”

“Oh, this horse-faced cunt again. Why won’t someone throw a bucket of water on her already.”

“She should follow her own advice, shut her piehole and get back in her 1950’s kitchen.”

“I wouldn’t be unhappy if Maddow gave up her right to vote, own property, have custody of her children, leave an abusive relationship or speak in public.”

“he should marry one of those right-wing hate radio guys who think feminists are Satanists, the right wing nutter.”

“It’s moments like these that I wish there were witch hunts again. She is the biggest witch and bitch in this country.”

“Does anyone care what this bimbo thinks?”

“I’ll provide a bottle of scotch to anyone that will hit her over the head with it.

“Rachel Maddow was once a man.”

If that did happen, progressives of every stripe would roundly denounce it as the hateful, violent,  disgusting, transphobic, misogynistic hatred that it is.

But sadly it is not “crazy right-wing Republicans” who said those ugly things and they weren’t talking about Rachel Maddow.  The comments were taken from the “progressive” leaning “We survived Bush. You will survive Obama.” Facebook group and their vitriol was pointed at Ann Coulter.

One commenter was right on the money. Eddie Garcia wrote:

“Coulter has a knack for bringing out the worst in the best of us. People who otherwise would never dream of making transphobic jokes or using a word like “cunt” suddenly forget those standards every time this woman spews another gout of toxic bile. I always felt that Ann Coulter was best ignored, I do try.”

Progressives, you have a long way to go before you can wear the word “progressive” around your neck. You need to first stop being what you contend you hate and fight against.

What Did Roseanne Say That Was So Transphobic?

I heard that question asked over and over on Twitter last night after Roseanne Barr tweeted: Well, the short answer is, "where do I start?" Barr is speaking of is Colleen Francis. Francis was using the sauna in a women’s…
Read
Previous Post

As you may know, most of the TS Separatist leaders have moved on with their lives and the ones who are left seem to be the Ashley Love/Just Jennifers of the world who regularly make absurd and demonstrably false claims.  I will continue to…
Read
Random Post

Having learned that the mainstream publication The Atlantic has paid professional anti-trans concern troll Jesse Singal to write about trans issues, I want to address his well-worn arguments before he can make them. To do so, I will assert and…
Read
Random Post

By Autumn Sandeen & Cristan Williams Anti-trans activists in both Mississippi and North Carolina have passed laws that effectively remove trans people from public life. Making it legal on a state level to discriminate against trans people in employment, housing, goods, and…
Read
Random Post

Facts matter. Here is a timeline that apparently cannot be spoken of in Gay Blog Land. “jpmassar” posted the item New Hampshire to LGBTs: Happy New Year! Now Die. In the view of myself, Kathleen and some others, the post mischaracterized…
Read
Random Post

Am I the only one who is a bit puzzled/miffed/baffled by Barney Frank's insinuation in this exchange: There is another difference from 2007. Frank now has a policy adviser who is a female-to-male transsexual. Diego Sanchez is the first transgender…
Read