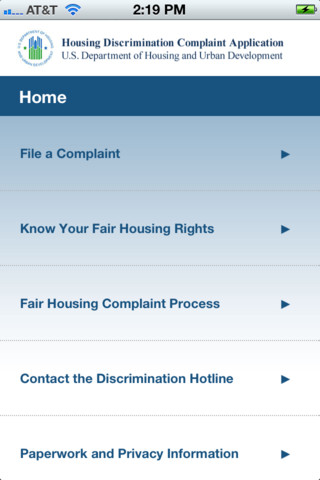 Reciently, the U.S. Department of Housing and Urban Development (HUD) unveiled the first housing discrimination mobile application (app).  The app provides a quick and easy way to learn about your housing rights and to file housing discrimination complaints, and inform the housing industry about its responsibilities under the Fair Housing Act.

Previously, the U.S. Secretary of HUD Shaun Donovan said an estimated one in five transgender Americans have been refused a home or apartment, and more than one in ten have been evicted because of their gender identity or expression. He went on to say that for the Obama Administration, addressing the trans homelessness issue is “not as an issue—but as a priority.”

The consequences of not creating safe shelters for transgender people are grim. If shelters are not safe and respectful, many transgender people will avoid them and seek other places to stay. When faced with a shelter that subjects them to disrespect, harassment, or other safety risks, transgender people may be better off out on their own. On top of safety concerns that a transgender person may have, it is important to understand that there is a deep emotional injury that comes with not being accepted or treated with respect by a service provider.

– Transitioning in Our Shelters: A guide for making homeless shelters safe for transgender people

Exacerbating the issue of trans homelessness is the fact that living on the street puts trans individuals at a greater risk for becoming HIV positive. Being excluded from the social safety net that’s available to everyone else, the beatings, the rape, the survival sex – all these risk factors are focused upon the homeless trans population and the result is an out-of-control epidemic tearing through an incredibly vulnerable population. The HIV infection rate among the homeless transgender population is more than TWENTY-TWO percent… 22.11%! By comparison, the HIV infection rate in Sub-Saharan Africa is just 5% and world-wide, it’s .8%.

Homeless rates among trans individuals range from a conservative 20%  to 49%. [1] The trans community itself has tried various ways – both creative and aggressive – to address the significant homeless problem within the trans population.

For years, the trans community fought for their right to housing. The above video was part of an aggressive and successful advocacy campaign that resulted in Covenant House (a teen homeless provider) becoming a trans-supportive and affirming Safe Zone [2] youth homeless shelter. For years, Covenant House refused to house transgender people. After some serious targeted and coordinated advocacy, Covenant House is now openly supportive and welcoming of trans kids. Moreover, the Houston GLBT-positive model is being adopted by other Covenant Houses throughout the US, Mexico and Canada.

HUD’s new app will help you to both quickly access your federal trans-inclusive housing rights and immediately file an complaint. If you believe you have experienced (or are about to experience) housing discrimination, you should contact HUD’s Office of Fair Housing and Equal Opportunity for help at (800) 669-9777. You may also file a housing discrimination complaint online.

[alert type=”warning”]You can download the HUD discrimination app at the Apple App store.[/alert] [1] Nemoto, T., Operario, D., Keatley, J., Han, L., Soma, T. (2006) HIV risk behaviors among male-to-female transgender persons of color in San Francisco. American Journal of Public Health,  94(7):1193-1199 [2] “A SafeZone is a place where all people feel welcome and safe.  It may be a room, a car, or entire college campus.  It is important that institutions take proactive steps to create these safe and welcoming environments that promote teamwork and unity.” – http://gayalliance.org/safezonet.html

NOTE: There’s no word (yet) when HUD will roll out with an Android version. HUD states that they are, in fact, “working on rolling out an Android version,” but they weren’t able to give me a specific target date for the roll out.

This is a review of the way a single story is handled by two diffident tabloid newspapers. The sensationalistic reporting style is so starkly different that I thought it would make an exceptional case study for the dos & don'ts of trans reporting (even…
Read
Previous Post

With a vote coming soon on the Employment Non-Discrimination Act, I'd like to revisit something Chris Crain said a while back in his post "A trans activist tees off on ENDA" that was in reference to my post "You Can…
Read
Random Post

A much older adult, who was famous in the eyes of a kid, talked the minor into exposing themselves to the adult. The adult then took a good long look - long enough to memorize the details of the kid's…
Read
Random Post

This is the second in a series on backing your community. During the month of December, the TransAdvocate will feature 12 AMAZING trans nonprofits/causes that deserve your support. The Gender Book is one of those super amazing projects that you…
Read
Random Post