The mere mention of the “cotton ceiling” should send rapey shivers up your spine. If you’ve not heard of it here’s the lowdown from feminists:

Planned Parenthood Toronto is helping to sponsor a March 31 conference in Toronto that includes a workshop inviting participants to discuss and strategize ways they might be able to “overcome” women’s objections to these participants’ sexual advances. We believe that no means no, that a woman’s right to say “no” to sex at any time is sacrosanct and that no explanations should ever be requested because none is ever necessary. The name of the workshop proposed is “Overcoming the Cotton Ceiling: Breaking Down Sexual Barriers for Queer Trans Women.”

– Petition against the cotton ceiling 2

Activists want to force lesbians to consider them as sexual partners. 3

Sounds really horrific, doesn’t it? Transwomen, full of male-privilege, feel that lesbians must submit to having sex with them or else they’re transphobic. Right? I mean, multiple lesbian feminists are all saying the same thing. Even Cathy Brennan has a cotton ceiling tag. Certainly, these self-identified lesbian feminists wouldn’t lie, right? Certainly, these self-declared feminists wouldn’t purposely misrepresent cotton ceiling in an effort to make ciswomen fear trans people, right? RIGHT?!?

[Cotton Ceiling commenter] you are a male sexual predator, enabling your male predator brethren. Which is why you and all your Cotton Ceiling buddies creep me the fuck out… These dudes in dresses are trying to guilt-trip you into sleeping with them, and name-calling you if you don’t. There is nothing wrong with not liking penises or male bodies, and preferring female bodies. To say otherwise is lesbianphobic. 4

Horrific, isn’t it? Planned Parenthood held a workshop to teach transwomen how to make lesbians have sex with them. I want to reread the previous sentence and think about that for just a moment. Then reread the rhetoric about the cotton ceiling. With a straight face, these self-identified feminists asserted that Planned Parenthood taught transwomen how to trick lesbians into sex.

Seriously. And you know what? A lot of people believed it. 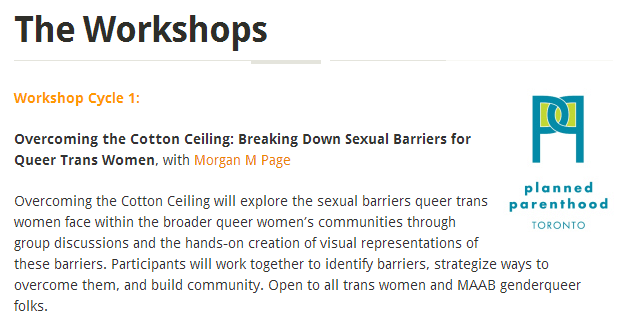 There! See it? It says right there in the description: Overcoming the Cotton Ceiling will explore having sex with lesbians who don’t want to have sex with trans people! It says it right there… oh wait… it doesn’t say that at all.

Can you guess how many attended this,  the workshop-heard-round’-the-feminist-world?  Was it…

If you guessed 7, you’d be correct. Let that sink in for a moment. All of this over a workshop with 7 people.

Care to guess what they talked about?

Would it really surprise you to know that what they talked about was body image and shame?

I want you to pause for a moment and think hard about the notion that TERFs are pushing: transwomen support corrective rape.

Here, let me break down the basic TERF rhetoric:

TERF: Teh cotton ceiling is all about teaching trans people how to rape lesbians!1!!

TERF: Yeah, Planned Parenthood gave a workshop to teach trans people how to rape lesbians! No means no!

Dupe: That sounds a little strange to me…

TERF: Don’t believe me? Google any of the many, many, many TERF blogs that freaked over the Planned Parenthood workshop! #rapeculture

Dupe: Well, I did hear about how transwomen want to hang out in the women’s restroom…

Dupe: I’m totally blogging about this!

Think about all the fear and enmity TERFs managed to generate over the Cotton Ceiling during this past year. They took a small meeting about shame and body image and purposefully twisted it to dupe people into believing that Planned Parenthood was teaching corrective rape tactics and MANY people believed it. 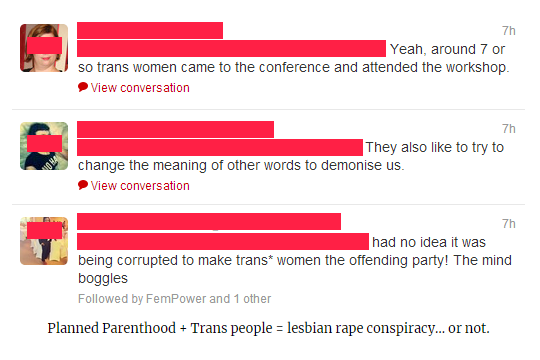 TERFs did what they almost always do. They equivocate in their arguments:

Participants will work together to identify barriers, strategize ways to overcome them, and build community.

TERF Petition to stop the workshop:

Planned Parenthood Toronto is helping to sponsor a March 31 conference in Toronto that includes a workshop inviting participants to discuss and strategize ways they might be able to “overcome” women’s objections to these participants’ sexual advances.

Workshop supporters have suggested that “Overcoming the Cotton Ceiling” is intended to facilitate a discussion about the social construction of sexual desire. Even if this were the case, being a lesbian is not a prejudicial social construct to be overcome by expanding lesbians’ limited political consciousness around trans women’s “gender identity.”

From there all a TERF need do is appeal the transwoman-rapist meme the radical right pushes while referencing the TERF petition and sit back and enjoy their malevolent handiwork. 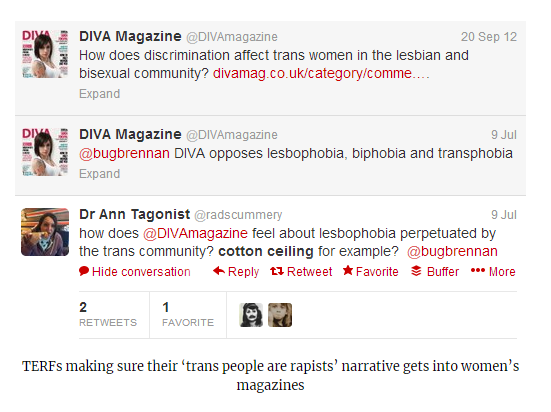 Back when all of this began, trans folk were really clear about what the cotton ceiling was about: 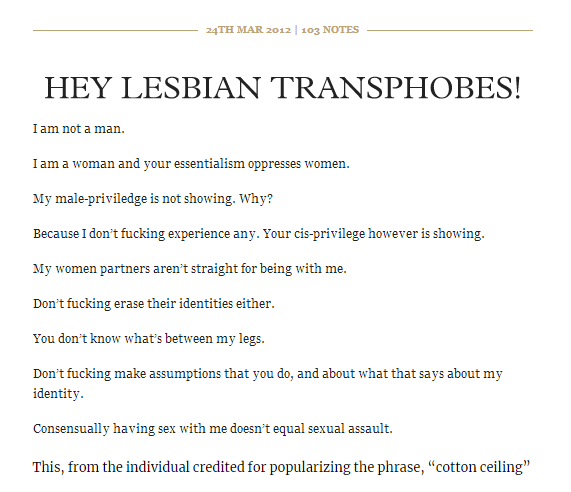 Or as a cisgender dyke organizer put it:

The idea of the “cotton ceiling” is intended to draw attention to how even in spaces that are politically and socially welcoming of trans women, transphobia often retains its influence on how we understand who is sexually desirable and who isn’t. It’s no different from other politicized criteria for desirability—people who are, for instance, fat or disabled are also often welcomed into queer women’s space but not seen as desirable compared to those hot slim, muscular, able-bodied sorts. This isn’t our fault—our entire culture tells us what’s sexy and what’s not, 24 hours a day, and that definition is terribly narrow. But it is really easy to forget how much influence advertising propaganda and social pressure can exert on what gets us wet and hard, and to let the mainstream’s terms dictate our desires. 5

If a small group wanted to talk about how ableism affected cultural notions of beauty and/or desirability, would feminist circles tolerate TERFs going on a yearlong campaign, claiming that those who aren’t able-bodied want to force lesbians to have sex with them?

In a culture that devalues and oppresses trans people, why is it not appropriate to discuss how these cisnormative beauty standards impact notions of desirability, how these biases relate to the fetishization of trans people and how all of this impacts the perception of trans people in queer spaces? Why is it not appropriate for transwomen to ask themselves how this affects the way we see ourselves and/or how this affects the way others view us?

Why don’t TERFs want trans people to have this discussion?

How would such a conversation affect the anti-trans TERF narrative they’ve been pushing for decades?

because the fact of the matter is that unlike born-women, who have everything (literally, everything) to lose from rape culture, transwomen have at least something (everything?) to gain. to a transwoman, cutting off her dick and turning it (inside out) into a fuckhole between her legs makes her feel better. from transwomens own mouths, we know that these fake fuckholes alleviate transwomens suffering. turning their dicks into extra-large condoms for other men to penetrate (or not, whevs…thats my hat-tip to the internet “lesbian transwomen”) actually tamps down their anxiety, and feelings of dysphoria.  6 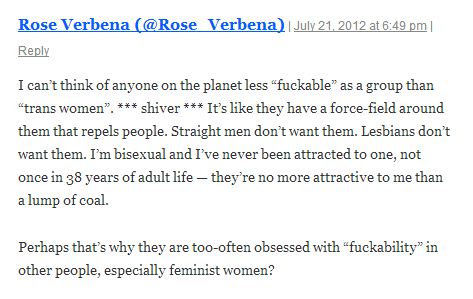 Today the Frankenstein phenomenon is omnipresent not only in religious myth, but in its offspring, phallocratic technology. The insane desire for power, the madness of boundary violation, is the mark of necrophiliacs who sense the lack of soul/spirit/life-loving principle with themselves and therefore try to invade and kill off all spirit, substituting conglomerates of corpses. This necrophilic invasion/elimination takes a variety of forms. Transsexualism is an example 7 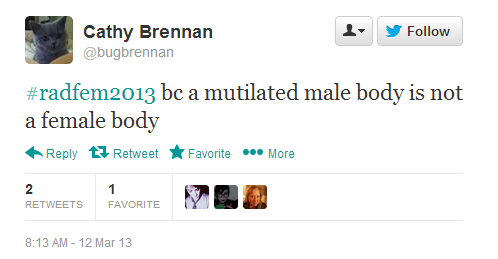 [Transsexual surgery] could be likened to political psychiatry in the Soviet Union. I suggest that transsexualism should best be seen in this light, as directly political, medical abuse of human rights. The mutilation of healthy bodies and the subjection of such bodies to dangerous and life-threatening continuing treatment violates such people’s rights to live with dignity in the body into which they were born, what Janice Raymond refers to as their “native” bodies. It represents an attack on the body to rectify a political condition, “gender” dissatisfaction in a male supremacist society based upon a false and politically constructed notion of gender difference.

Recent literature on transsexualism in the lesbian community draws connections with the practices of sadomasochism. 8 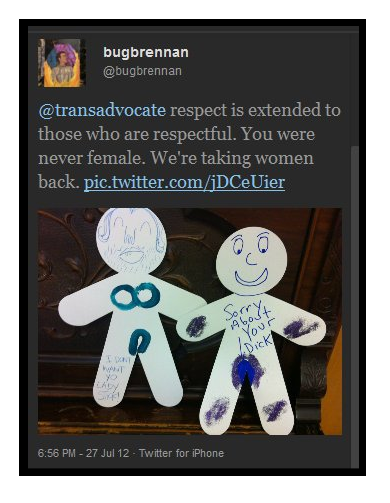 This should be a simple issue. How could our oppressors – men – possibly become us? How? Just by saying they are?  By the male medical industry and doctors making money off this game, declaring that they can turn men into women?  Would you agree with these men if they claimed to be a different race than they are, a race they are in a position to oppress?  Would you believe them if they claimed to be of a different species?  Why not?

If you do accept them as Lesbians, would you (as a Lesbian) want to be lovers with one?  Why not?  If you are hesitant to say “no” to their claims and demands, in spite of what you feel inside, why?  What is it that makes you agree to something that doesn’t feel right?  Does it remind you of other times when it was hard to deal with a man who refused to take “no” for an answer? 9

How would a serious discussion about our transmisogynistic culture, and its influence over notions of beauty impact anti-trans TERF messages?

How does shutting down this discussion benefit the TERF narrative?

Does it benefit the anti-trans TERF aims and goals to not only stop this discussion but to colonize it in such a way that feminists would instinctively view the discussion as being an inherent part of rape culture?

“Transwomen” are not and can never be women or Lesbians – they are simply men, trying to steal our identity and culture… One way to begin to fight their oppressing Lesbians and women is to refuse to give them what they want. At the very least, PLEASE stop calling them “women” in any form, and stop using female pronouns for them… they act like typical men and intimidate and guilt trip – everything is about them. And the hell with any Lesbian who gets in their way. Some have also learned what to say to sound believably female, but if you question a bit further, they revert quickly to male bullying techniques. As for those who do have surgery, men do a lot of bizarre things for sexual gratification, such as strangling themselves to have more exciting orgasms, which has resulted in some unintentional suicides (such as that by David Carradine.)

As Janice Raymond says, “All transsexuals rape women’s bodies by reducing the real female form to an artifact, appropriating their body for themselves.”  It’s actually reminiscent of the “Invasion of the Body Snatchers.” 9

… defines the conversation when we try to talk about what this YouTuber is talking about:

And so, by way of summation, an excerpt from Cesaire:

… Lying is your trademark.
And you have lied so much to me
(lied about the world, lied about me)
that you have ended by imposing on me
an image of myself.
underdeveloped, you brand me, inferior,
That is the way you have forced me to see myself
I detest that image! What’s more, it’s a lie!
But now I know you, you old cancer,
and I know myself as well

Curious to know how TERFs have reacted to this post?

Tweet 1.) A repeat of the TERF rhetoric over the past year: Trans people want to rape lesbians and Planned Parenthood is in on it.

Tweet 2.) Refer to the Dupe rhetorical narrative noted above

I submit to you that the above snapshot of TERF pablum beautifully illustrates the vicious obtuse hubris that is TERF dogma. This rhetoric should be openly mocked, rejected and denounced by reasonable people the world over.