Having learned that the mainstream publication The Atlantic has paid professional anti-trans concern troll Jesse Singal to write about trans issues, I want to address his well-worn arguments before he can make them. To do so, I will assert and then substantiate a few things:

Jesse Singal has enjoyed a great deal of support from anti-trans groups including those of the political right, the alt-right, and a small faction of anti-trans self-identified feminists. Singal’s anti-trans articles all conflict with at least one of the above three facts. These anti-trans movements, who collectively refer to themselves as “gender critical,” exist to obscure the above three facts in pursuit of reducing the number of trans people that exist today.

Point One: The DSM-IV GID

To understand the problems with the DSM-IV GID, and perhaps better understand why the trans community has fought against it so hard for so long, we need to begin with the DSM-III’s conceptualization of GID:

The DSM-III’s understanding of GID meant that one had to express dysphoria regarding their phenotype. Merely being gender nonconforming (GNC) alone was not enough to diagnose a kid with GID. Some sexologists were frustrated with this situation as they wanted a way to put GNC kids into “treatments” designed to make them behave more stereotypical in their gender expression.

Anti-LGBT activist George “Rent Boy” Rekers1, who was caught by the NY Times after having spent two weeks with a male sex worker from RentBoy.com, teamed up with Dr. Green to produce a study titled, Behavioral Treatment of Deviant Sex-Role Behaviors in a Male Child. In fact, Green facilitated this study by sending “deviant” gender expressing kids to Rekers for him to study. This “research” was the foundation for Green and Rekers’ Sissy Boy Syndrome, a “study” that found that putting a group of mostly non-GD GNC kids (with a few GD kids mixed in) through “treatments” designed to make them act more stereotypically male, most of the group wound up not having GD. Yes, you read that correctly. A group made up of mostly non-GD kids produced a group mostly made up of non-GD kids. Specifically, it found that around 80% of the study participants did not have GD after their “treatments.” Remember this 80% number because it shows up over and over again in anti-trans literature.

Worse, this “study” was later implicated in the death of one of its subjects.

Nonetheless, Green’s friend, Dr. Zucker and Zucker’s colleagues at the government-run CAMH gender clinic populated the DSM-IV Workgroup and set to work turning the Sissy Boy Syndrome framework into a diagnostic category: the DSM-IV GID. This wasn’t a secret. Those involved with the Workgroup published papers and periodic updates explaining their goals:

These sexologists made it clear that they supported a diagnostic framework that minimized phenotype dysphoria and instead centered itself on nonconforming gender behavior. In fact, this was accomplished in the DSM IV:

Under the DSM-IV, one need only be GNC to receive a GID diagnosis. This resulted in numerous “transgender” studies using the above Sissy Boy Syndrome-derived metric.

When the American Psychiatric Association issued the DSM-5, the DSM-IV category, GID was removed. Many media outlets wrongly reported that GID was being renamed GD, leading many laypeople to believe that GID was basically the same thing as GD. This is a mistaken belief; GID and GD represent two different groups:

GID group: mostly comprised of those who experience anxiety because they are, in some way, gender non-conforming as well as a relative few who are debilitated by a mismatch between their gender orientation and their phenotype.

GD group: comprised of those who are debilitated by a mismatch between their gender orientation and their phenotype.

Unscrupulous writers like Singal proclaim that around 80% of GD kids will stop having GD based on old GID studies that found that most kids with GID do not wind up having GD. Nevermind that most GID kids didn’t have GD in the first place. To drive the point home regarding the difference between GID within a DSM-IV context and GD within a DSM-5 context, here are both categories:

The point is that many who had a DSM-IV GID diagnosis will not qualify for a DSM-5 GD diagnosis because being gender nonconforming alone is not enough to get a DSM-5 GD diagnosis. Let’s consider just how many kids this difference effects. When asked how many kids Dr. Zucker “treated” at his gender identity clinic for GD, he said that a full 70% of them did not have gender dysphoria in the first place. In fact, these children came into his care merely because they were GNC:

In its heyday, Zucker’s GID clinic was one of the busiest and most prominent clinics of its type in the world and the vast majority of kids Zucker’s clinic “treated” didn’t have GD in the first place. Nonetheless, they were treated for GID with behavioral therapies designed to make these kids behave in more stereotypical ways. Under the DSM-5, the only kids Zucker would be able to treat would be the 30% that did, in fact, have GD.

Shortly after the DSM-5 was published, Dr. Zucker’s boss was blindsided by a reporter asking him if Zucker’s clinic would continue their DSM-IV centered “treatment” of kids. When Zucker’s boss said no, the reporter cited a statement by Zucker claiming that he intended to continue his DSM-IV era “treatments.” Shortly thereafter, Zucker was fired and anti-trans movements across the globe repeated the lie that a cabal of powerful trans activists somehow/someway forced Zucker out and that children would be the worse for it.

An anti-trans site called Transgender Trend recently published a slick booklet targeting schools. The propaganda this booklet spreads is rooted in the notion that a DSM-IV GID diagnosis is exactly the same thing as a DSM-5 GD diagnosis. Consider the following fact claim in terms of what you now know about the differences between a DSM-IV GID and the DSM-5 GD, particularly where the 80% desistance rate originates from:

And yet, this claim is even found in the #1 bestseller in Gay & Lesbian Philosophy on Amazon, When Harry Became Sally: Responding to the Transgender Moment by Ryan T. Anderson:

In the past 10 years, dozens of pediatric gender clinics have sprung up throughout the United States. In 2007, Boston Children’s Hospital “became the first major program in the United States to focus on transgender children and adolescents,” as their own website brags.

A decade later, over 45 gender clinics had opened their doors to our nation’s children—telling parents that puberty blockers and cross-sex hormones may be the only way to prevent teen suicides.

Never mind that according to the best studies—the ones that even transgender activists themselves cite—80 to 95 percent of children with gender dysphoria will come to identify with and embrace their bodily sex.

Never mind that 41 percent of people who identify as transgender will attempt suicide at some point in their lives, compared to 4.6 percent of the general population. Never mind that people who have had transition surgery are nineteen times more likely than average to die by suicide.

These statistics should stop us in our tracks. Clearly, we must work to find ways to effectively prevent these suicides and address the underlying causes. We certainly shouldn’t be encouraging children to “transition.”

Anderson both claims and insinuates that in 2017, most kids with GD will stop having GD, that transition itself leads to suicidal feelings and that because of these things, good people should try to prevent kids from being trans. These are lies. What’s more, they’re dangerous lies that the author was made aware of.

Certain ideological circles like to perpetuate the long-debunked lie that transition makes people suicidal. The 41% suicidal ideation rate referred to in the above book section seems to be referring to a study that found that trans people who were not supported attempted suicide at a rate of 41%. The study Anderson cites states: “Based on prior research and the findings of this report, we find that mental health factors and experiences of harassment, discrimination, violence, and rejection may interact to produce a marked vulnerability to suicidal behavior in transgender and gender non-conforming individuals.” Backing up this claim are statistics finding a greater burden of suicidal ideation among those who face specific types of discrimination: 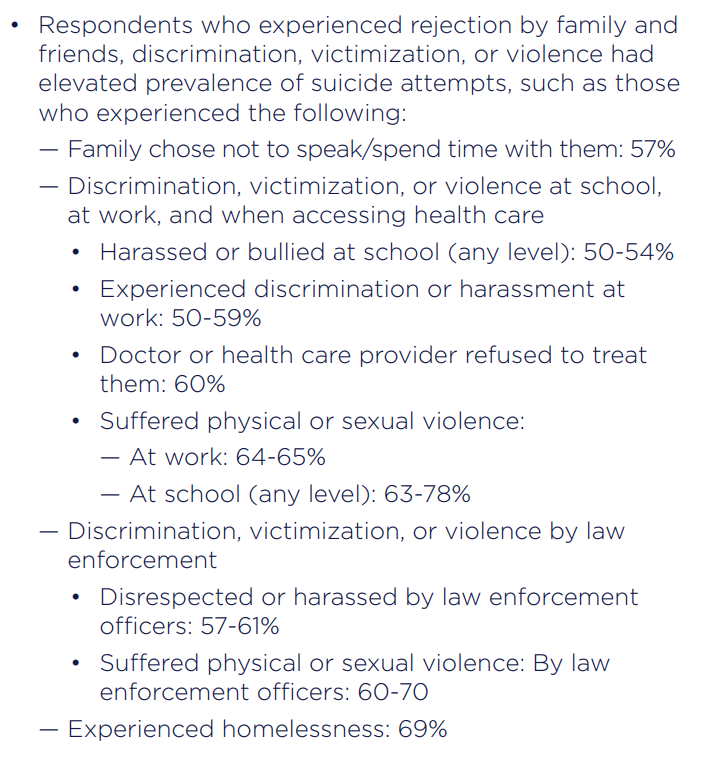 Why would Anderson –an author clearly aware of this study– hide this context in his admonition that “[w]e certainly shouldn’t be encouraging children to ‘transition.'”? Embedded in Anderson’s malevolent –and there is no other word for his disregard of life– is the claim that in 2017, “80 to 95 percent of children with gender dysphoria will come to identify with and embrace their bodily sex.” The only research asserting something like this is research on groups of DSM-IV GID kids, specifically the disco-era Sissy Boy Syndrome.

Pretending that DSM-IV GID research applies to a DSM-5 GD diagnosis is more than irresponsible, it’s possibly deadly. We’re no longer talking about a mixed group of non-GD GNC kids with a relative few GD kids mixed in; we’re talking about a group comprised of 100% GD kids. People like Anderson and groups like Transgender Trend are actively preying on vulnerable parents, who are oftentimes both worried and confused. They lie, telling them that DSM-IV GID research proves that around 80% of DSM-5 GD kids will stop being transgender, facilitating the placement of these kids directly into the at-risk pool.

We may never know the suffering these ideological hucksters cause as they target vulnerable children and families. Remember the Sissy Boy Syndrom kid that killed himself after receiving GID-IV style “treatment”? The kid’s name was Kirk Murphy, and, according to Murphy’s doctor, was, “an exceptionally effeminate child who played exclusively in a feminine role; who exhibited overwhelmingly feminine gestures, vocal inflections and gait; and who desperately wanted to be a girl.”

I thought about adding to the above list something about a fake syndrome this anti-trans movement has created and attempted to legitimate, but a good debunking of this fake syndrome called “Rapid Onset Gender Dysphoria” was already done over on the Advocate. I encourage you to take a look.