Human rights advocates braved the elements Saturday in Harlem to show their angst over the church sign promoting violence against the LGBT, and for good reason.

Just 20 blocks away, last year, fists were thrown at a transgender woman who lay dying on pavement stones. Islan Nettles was taken off life support by her mother a short time after. This is the violence that the ATLAH church promotes and this very sign, the one demanding violence, was most likely seen by the people that beat Islan to death.

When a preacher maliciously uses words to hurt, it makes one pause and wonder, what kind of religious leader would lead his parishioners to hate?

It’s pretty clear that the ATLAH church doesn’t preach love, and there is no law against that, but do they go over the line and should they be considered a hate group?

The Southern Poverty Law Center’s (SPLC) definition of a “hate group” includes those having beliefs or practices that attack or malign an entire class of people, typically for their immutable characteristics.

Co-organizer of the protest, Terry Roethlein, had this to say:

“ATLAH fits the SPLC’s definition of a hate group in that they consistently and publicly preach grossly negative messages about LGBT individuals. JD Manning also uses his pulpit to teach young parishioners homophobia and these destructive recent messages referring to stoning actually incite violence. By all means, any religious group like this should be at least called on their actions.”

After watching these videos and reading this post if agree ATLAH should be designated a hate group you can tell the SPLC here. 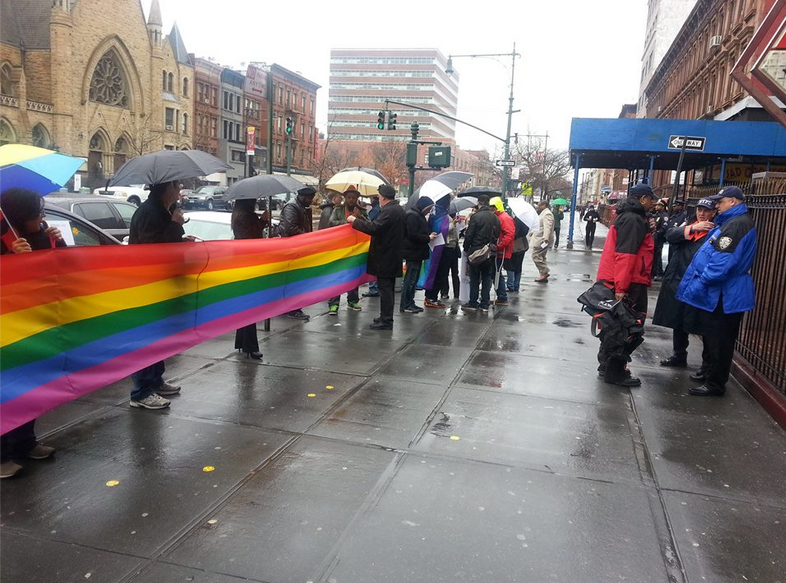 Our community is blessed with the strong leadership of transgender woman Jennifer Louise Lopez, a journalist with the TransAdvocate, as one of the organizers of the rally so I reached out to her and she offered this about the protest:

“Several transgender leaders in NYC came to support me and the LGBT community. We as Trans people physically feel the violence that signs, homophobic and trans messages such as the ones spread by David Manning spread. Less then 20 blocks away from that church, a Trans woman was killed, beaten to death for simply being trans. It is signs and teachings like this that cause such hate in our community. Tonight I was afraid to walk home, I waited at the event I was at until a friend was ready to walk home with me.”

Ms. Lopez has this to say about Manning’s hate-filled screed “Ten Cold Homos” in a video.

“I have yet to determine my response to the hateful message that was directed at me by David Manning and not sure if he even deserves a direct response from me. My attention is not on his little church building, however on the big mega-churches that are teaching this hate. I am directing my attention to help the LGBT community on a global level when it comes to these hateful evangelical Christians”

So who is this hate infested cult leader? According to Vocativ he’s a convicted felon who used to make a living doing home invasions until he found a better way to make a living by condemning LGBT people. He has also gone on record predicting an armed overthrow of our country’s democratically elected government.

You can call me anything, except late for my stoning.

Matthew 22:36-40
New International Version (NIV)
36 “Teacher, which is the greatest commandment in the Law?”