On  Thursday, March 27, 2014, the “Justice Department” launched a training program to supposedly improve relations with the trans community.

Deputy Attorney General James M. Cole made remarks here on the issue and ill be copying some of them over to reply to them. His comments will be italicized and in quotations.

“While it is difficult to find comprehensive data, a survey by the National Center for Transgender Equality found that discrimination against transgender individuals is pervasive: 63 percent of respondents reported they had experienced a serious act of discrimination that had a major impact on their quality of life and their ability to sustain themselves financially or emotionally.

Transgender people are reportedly four times more likely to live in extreme poverty than the general population. Too often, transgender people are the target of violent crime, including murder: 61 percent reported they were the victim of physical assault.  Those who escape violence from others may still face self-inflicted harm: 41 percent of the population who responded reported having attempted suicide. – [Data from NCTE’s 2011 executive summary http://transequality.org/PDFs/Executive_Summary.pdf]

“But the Community Relations Service serves the critical function of allowing the Department to be proactive — to improve understanding and improve relations before incidents occur.  CRS also plays a critical role in the aftermath of unfortunate events, by working to prevent additional violence by training and educating those on the ground in communities affected by anti-transgender hate crimes.”

“Today you will see that CRS’s new training helps ensure that we in law enforcement proactively protect the civil rights of all persons, including those who suffer from acts of hate violence or discrimination on the basis of his or her actual or perceived gender identity.”

That is touching, it really is. But its just words. You have years and years and years of violence against trans women to make up for. The proof will be in your praxis. All too often police measures to end discriminatory practices often just cloak them and make them harder to see. How about you put visual and audio recording devices on every single cop on duty? And if its off during the line of duty, they get fired. Allow the recordings to be available to the public on a searchable website.

The onus is not on us to trust you. The onus is on you to earn our trust. Don’t forget this. We don’t owe you shit.

“At its most basic level, the new training will provide tools to enhance an officer’s ability to build partnerships with community members and to work with fellow citizens, who share a commitment to public safety.”

My red flag system is being tripped here. I bet the readers money that this translates to continue persecuting the most marginalized among us while ignoring those who participate in respectability politics.

This is not a result that can or will be tolerated by the Justice Department, and it runs counter to the very role your community public safety officials want to promote.”

But do you understand why so many of us refuse to go to the police?  Do you realize you are a huge part of the problem? That when police show up they just make things worse? And now you say its unacceptable that we don’t go to the police, instead of saying its unacceptable that the police have acted in a way that earned our distrust and disdain. No, your very words betray you, you appear to want to create a snitch culture within the trans community to divide us further. That’s what it looks like to me. Perhaps the praxis will show otherwise, but right now I’m suspicious as hell.

“Over the past several years, the Department of Justice has observed the Transgender Day of Remembrance in November, a day to honor the memory of victims of anti-transgender violence and discrimination.

The Transgender Day of Remembrance is a day to recommit ourselves to breaking the cycle of violence that affects far too many transgender Americans. “

You don’t get to talk about the TDOR until the day you as law enforcement stop adding people to that list or ignore the cries for justice of the families of those on that list. Until every act of violence against transgender people is prosecuted under the fullest extent of the law regardless of who perpetrated it you do not get to use our suffering like this.

You again throughout this entire talk failed to mention the intersection of race and being transgender, the fact that trans women of color face the brunt of anti-transgender violence, that trans sex workers who are only trying to survive are targeted for arrest ahead of the people who murder and rape us.

If you really want to help, leave us alone and focus on the people who do violence to us, work to dismantle the institutional violence you perpetrate not only against trans women, but all marginalized people. Work to dismantle the entire system of oppression we live in. You as human beings have a moral obligation to challenge evil that goes above and beyond your oaths to enforce the law. When the law is used for evil, you must resist. You must challenge. You must do the right thing. Historically you have not, however. Historically you have resisted nearly every effort of reform and nearly every effort to ensure inequity is ended when it comes to law enforcement. 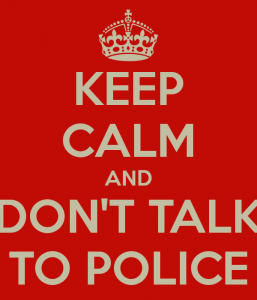 Until the day the lot of you clean up the house and become a real force for good, I’m going to suggest to the rest of my trans brothers and sisters to do what we have done before.