After an ordinance was approved in April by the City of Phoenix which prohibited discrimination in public accommodations based on gender identity, Republican Representative John Kavanagh introduced a bill that sought to make it a crime for a person to use a restroom or any other hygiene facility associated with a sex other than that which was assigned at birth, as noted on a birth certificate.

However, according to the AP, Kavanagh recently tabled his bill after some members in his caucus had expressed concern about his proposed definitions.

On the Texas front, a Republican attempted to (yet again) strip the right of trans people to marry. Currently, Texas Legislative law states that you can be issued a valid marriage certificate if you show proof of a “sex change” (see Sec. 2.005(b)(7)). This is the second year in a row that Republicans have tried (and failed) to remove this trans-positive section of Texas law:

The Texas Legislature meets once every two years. Both in 2011 and 2013, past Transgender Foundation of America board member (now with Equality Texas), Daniel Williams was instrumental in stopping these actions in their tracks. In 2011 Williams, Monica Roberts and I worked hard to defeat the anti-trans bill and this year Williams was able to quietly finesse its death before it came down to a vote. 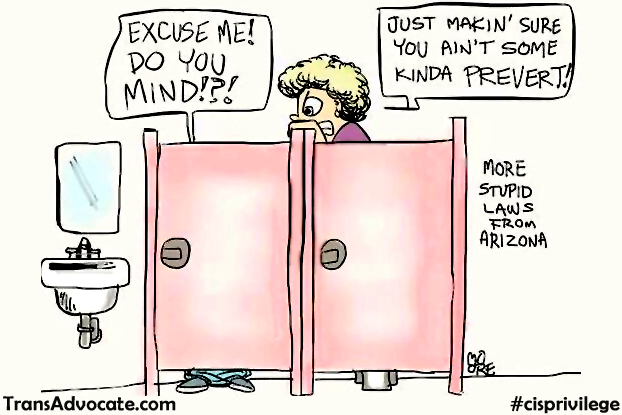 Victoria Brownworth has been in the news lately because she is a Trans Exclusionary Radical Feminist (TERF) who has a history of interpreting the trans experience for disempowered trans people. What follows are excerpts from her 2008 Philadelphia Gay News article, Trans youth: Risking life…
Read
Previous Post

Insane in the Swiss-Cheese-Brain, et. al.

Well, well... Looks like I touched a Marriage-Derangement-Syndrome-addled nerve : WHAT THE ***** IS WRONG WITH YOU - YOU THINK GAY MEN AND LESBIANS SHOULD NOT HAVE THE RIGHT TO MARRY - ************** Apparently MDS is biologically linked to Creutzfeldt-Jakob…
Read
Random Post

I'm sure many of you have seen the various protest images of Vladimir Putin's image colored as if he's wearing false eyelashes and makeup. The images are used to protest against anti-queer oppression in Russia. Do you think the image…
Read
Random Post

On February 19th an episode called "Tr*****s Twerk It Out" was broadcast on the Jerry Springer show, as we are all aware this show has a long history of making transgender women the object of disgust and disdain. To be…
Read