The New York Magazine lies to parents about trans children

Jesse Singal, the Senior Editor at nymag.com, has enlisted his New York Magazine blog to promote the widely publicized presumption that painful distress with birth-assigned sex and gender are just a phase for the great majority of children who suffer it:

While the actual percentages vary from study to study, overall, it appears that about 80 percent of kids with gender dysphoria end up feeling okay, in the long run, with the bodies they were born into.

Singal’s article defines “desistance” as, “the tendency for gender dysphoria to resolve itself as a child gets older and older.”  Singal praised the 80% “desistance” claim in his article as “solid scientific consensus” and boasted that “every” study, not some, but “every study that has been conducted on this has found the same thing.” He scorned those who do not accept the 80% presumption (Tannehill 2016, Serano 2016, Olson and Durwood 2016) as “part of the problem,” as essentially “ignoring” science, and preventing “intelligent, informed discussion.”

The real problem, however, is that Singal’s support for the 80% presumption and its promoters from the Toronto Clarke Institute/Centre for Addiction and Mental Health (CAMH) and the Dutch VU University Medical Center rests on a critical, misleading statement in this article:

It’s hard to imagine a kid meeting all the necessary criteria in the DSM-IV and not ‘actually’ being gender dysphoric… Since 63 percent of the subjects in Singh’s study met these criteria, this really wasn’t a sample of children who were ‘just’ gender nonconforming.

The author preceded these remarks with a listing of the 1994 Diagnostic and Statistical Manual of Mental Disorders, Fourth Edition (DSM-IV)[1] diagnostic criteria for “Gender Identity Disorder of Children” (GIDC, 302.6) that were used for intake selection in childhood “desistance” studies in Toronto and Amsterdam between 1994 and 2013, but the actual diagnostic criteria contradicted his conclusion. In fact, the subcommittee responsible for Gender Identity Disorders in the DSM-IV, as the 4th edition is known, deliberately chose to allow diagnosis of GIDC without any “explicit wish to be of the opposite sex”[2] –a loophole that was partially corrected in the DSM-5, published in 2013. For example, the following statement could be false, and yet children could still be diagnosed as having a “gender identity disorder” under the DSM criteria used for “desistance” research:

“1. Repeatedly stated desire to be, or insistence that he or she is, the other sex.”

The above quote comes from  Subcriterion 1 of Criterion A of the Gender Identity Disorder of Childhood diagnosis, but this subcriterion was not required for diagnosis. In fact, only four of five subcriteria were required to meet Criterion A. Here are the remaining four. They all describe gender nonconforming behavior: 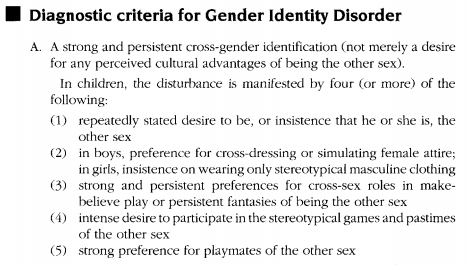 By this now void standard, children could be judged to meet Criterion A strictly on the basis of gender nonconformity alone, with no indication of actual gender dysphoria or incongruent gender identity. Here’s a quick breakdown of the rest of the now void DSM-IV and DSM-IV-TR criteria :

Criterion B referenced gender dysphoria (in the Fisk, 1973, sense of distress with physical sex characteristics or assigned gender roles[3]) but once again had loopholes that allowed diagnosis because of behavioral gender nonconformity without evidence of actual gender dysphoria. Birth-assigned boys could meet criterion B with “aversion toward rough-and-tumble play and rejection of male stereotypical toys, games, and activities.” So could birth-assigned girls with a “marked aversion toward normative female clothing.”

Criterion D was the clinical significance criterion, added to almost all categories in the DSM-IV. It required significant distress or impairment in “social, occupational, or other important areas of functioning.” However, the GIDC supporting text maintained that distress from societal prejudice, rather than from gender dysphoria itself, would meet criterion D (APA 2000, p. 577).

To be clear, the criteria of the DSM-IV –the very standard under which kids could be diagnosed with “gender identity disorder” without actually having gender dysphoria– is how these researchers came to tout an 80% desistance rate that is quoted in New York magazine. Remember, these flawed standards[4], [5] are NOW VOID. These loopholes were partially corrected in the DSM-5 in 2013, but the data from the prior “desistance” studies of gender nonconforming children were never reevaluated in light of the new diagnostic criteria.

Watch the Video Version of this Essay

A version of this article originally appeared on GID Reform.

Is Sadism Popular With TERFs? A Chat With An Ex-Gendercrit

BY Rani Baker @destroyed4com4t Let’s get this out of the way: deep down, I believe everyone is earnestly trying to do things that are right and protect things that they value. I mean, I kinda have to believe this on some…
Read
Previous Post

The media is lying about why NC is being sued

By Cristan Williams @cristanwilliams Almost without exception, all news stories covering the US Attorney General's suit against North Carolina omits the rather significant fact that when North Carolina took federal money tied to the Violence Against Women Act (VAWA) and…
Read
Random Post

Trans Student Attacking Girls in School Restroom! Or, you know... not.

The push for radical transgender rights in schools is trumping privacy rights at one Colorado high school. A male student at Florence High School who claims to be a transgender has been harassing girls in the bathroom. When parents complained,…
Read
Random Post

A recent post over at the Indiana Equality blog was enough of a kick in the pants to remind me to post about some recent events. If you know me, you know how jazzed I am about Barack Obama. The…
Read
Random Post

A Week of Direct Advocacy

It looks as if the trans-panic defense is alive and well in Palm Beach. From the Palm Beach Post: Two strangers met outside a bar on Clematis Street in West Palm Beach. One of the strangers turned out to be…
Read