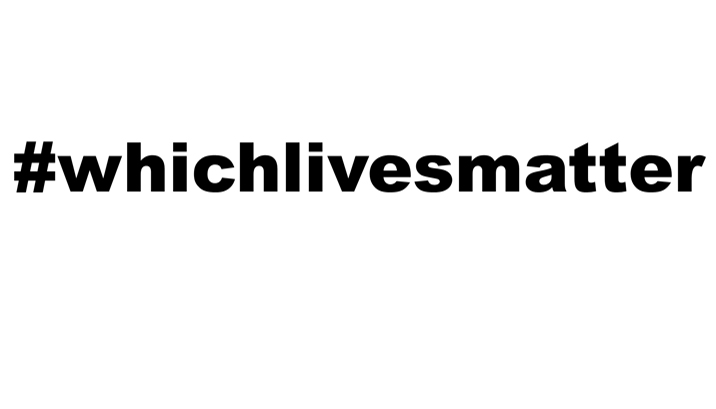 Cianán is a lapsed Ph.D. chemist, writer, public speaker, trainer, activist, and assessment expert whose interests in activism are transmasculine representation in global trans activism and development of the public concept of trans folks as complete people with lives, identities, and desires beyond simply being trans. As a gay trans man, his personal interests also include expanding the visibility of the variety of trans folks, prevention and treatment of sexual violence and rape amongst trans survivors, and sexual and reproductive health services for gay and queer trans men. Cianán has founded and worked with numerous local, national, and international trans rights organizations, writes a blog at transience-inside.blogspot.com, and lives in Bangkok with his partner.

Racial injustice and police brutality in the US have been heavily discussed these past few weeks (it’s actually been much, much longer, although many of us have only become aware of late). From those conversations, actions, and protests, many brilliant pieces of social media activism have emerged, including the birth and spread of the hashtag #BlackLivesMatter. This hashtag is beautifully succinct, consequential, jarring, and particularly important because of how desperately white America needs to hear, vocalize, and repeat the phrase to combat our socialization. As a white person myself, I find that every time I type or speak this phrase, I am given the opportunity to be reminded of a critical truth that was actively withheld and at times intentionally misconstrued: namely that the lives of Black people and people of color are worth no less than white lives. Global anti-Blackness places Black lives squarely at the bottom of the racial hierarchy. Fortunately, though, oppression works such that raising those in the lowest positions benefits us all, while raising the higher positions only enlarges the gaps.

Regrettably, one of the things I’ve seen since the viral boom of #BlackLivesMatter is use of this phraseology by white and non-Black people in directly appropriative ways. The primary example, #alllivesmatter, has been discussed at length by Black people. I should not and will not repeat or summarize their writings; their voices here are more important than mine. Please read their words firsthand: a small sampling can be found here by Julia Craven, here by Aaron Goggans, and here by Alicia Garza. Also, perhaps more damagingly, variations on this hashtag have been co-opted by other oppressed minorities such as my own, trans people, with #translivesmatter.

#translivesmatter as a concept is poignant and necessary. I am trans and my life does matter; I labor every day with this conviction. However, the act of using the hashtag in ways that are not specifically about fighting anti-Blackness is a problem because it shifts attention away from Black people. This shift is an appropriation and it dilutes the power of the message. Our society actively teaches us all to subconsciously assume that a person is white unless otherwise stated; removing the direct reference to Black lives for many people results in considering a white person, not a Black person. For example, white people and people of color are described differently – a man vs. an Asian man – which implies that “a man” must be white because his race is left unspecified: the default assumption is whiteness. This default is one symptom of the underlying white supremacy on which our society is based. If a hypothetical person is always white, then in the intervening 60 years, all we have done is trade a physical manifestation of “separate but equal” for a more insidious intellectual one. Plausible deniability.

Any action that promotes the idea that “white people are inherently superior to people from all other racial groups, especially black (sic) people, and are therefore rightfully the dominant group in any society”1 is white supremacist. This holds true even when the users of the hashtag are not themselves white. Every time someone uses #(insert characteristic)livesmatter without making it about Black people, the act of using it and calling on its painful beauty without the focus on Blackness steals and redirects away from Black movements. It’s a mistake to think that using #(insert characteristic)livesmatter has no impact on the power of #BlackLivesMatter, because that belief ignores the white supremacist context in which these hashtags are used.

The only way to escape white supremacy is to actively and constantly consider it, adjusting our language, our social interactions, and our concepts of humanity. White people claiming to be “color blind” is itself white supremacist because it ignores the ways in which the lived realities of many Black people and POC differ from theirs and assumes a mythical “level playing field”, allowing users of the “color blind” doctrine to absolve themselves of complicity without doing any actual work.

So trans folks, this bit is directly for us: yes, trans lives absolutely do matter, and yes, we need to actively and constantly remind cisgender (non-trans) people of this fact. However, doing so by deflecting attention from Black lives isn’t the way. I’ve seen many white and non-Black trans people using #translivesmatter. Upon being called out, they often assert that its use promotes unity because the world won’t change if we don’t all work together, right? Unfortunately, this argument misses the point: to all work together, we must not obfuscate the explicit inclusion of Black people within those that must be freed from oppression. Black lives must be given active focus, as must trans lives. Taking attention from one to benefit the other, though, will lead to freedom for neither: as trans folks, we cannot all be valued if the Black trans men and women among us are not valued, and they cannot be valued in the face of anti-Blackness and white supremacy. Just look at our TDOR lists: Black and POC trans women make up a devastatingly disproportionate majority of those we have lost to anti-trans violence. As trans folks, we’ve been the group waiting for our “allies” to come back for us after our blood has been spilled and we know how well that has worked; let’s not perpetuate that progressive mythology ourselves.

It may not be that #BlackLivesMatter was the first-ever rendition of the #(insert characteristic)livesmatter hashtag, but that’s no longer relevant because of the momentum that #BlackLivesMatter has gained. Any use of other characteristics in this hashtag only distracts, not unifies. If we truly want to see a world that is free and unoppressed, start with the ways in which we are oppressing others ourselves. Being free means that we as trans folks have to be allies to other people, too. The only way we can be seen as whole people is to act as whole people do, and that includes knowing when it isn’t our time to speak and supporting others as we would like them to support us. Co-opting from a Black revolutionary movement isn’t the way.