I heard that question asked over and over on Twitter last night after Roseanne Barr tweeted:

Well, the short answer is, “where do I start?” Barr is speaking of is Colleen Francis. Francis was using the sauna in a women’s locker room inside the recreation center at Evergreen State College when a few girls from a local swim team complained.

What do I find transphobic about Barr’s statement?

But Barr’s comments only got worse: 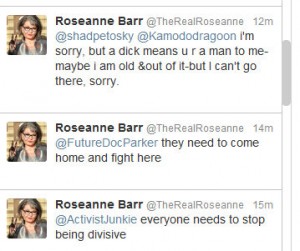 Regardless of what the perception of the world is of a trans woman, she is still not a woman in Barr’s eyes. No matter if a trans woman is perceived by her employers, friends, and society as a woman, they’re still a man to Barr. It doesn’t matter that they will get paid less than a man, get fewer promotions than a man, or be poorer than a man. It won’t matter that they are sexually harassed as women, unsafe in men’s space because they are perceived to be women, and suffer from misogyny. None of that matters to Barr. What matters is what no one sees, namely their genitals.

Transgender women shouldn’t be there because young girls are uncomfortable? Should lesbians be barred because they might make these girls uncomfortable? Try replacing transgender with “black”, “Jewish”, or “lesbian” and then tell me that it’s not transphobic.

What people should be uncomfortable with is hating/discriminating against someone they don’t understand. In the words of McCassidy123:

“I am a captain of the swim team at Capital High School (one of the swim teams that practices at the college) I personally do not have any issue with the woman being in our locker room so to generalize that the “girls are uncomfortable” is not true. I feel this woman has just as much of a right to be there than anyone else and am annoyed how out of control this has gotten.”

I’m glad that this teen actually gets it. Gets the REALITY that trans women, post-op or pre-op, are not a danger.  She’s not falling for the mythical “transgender predator” meme. I wish Barr was enlightened as this teen is, but can I  really expect enlightenment from someone that wrote:

“Then the Transgendered versus the Butch Dyke wars started—to see two of those folks fighting about being female was quite an eye-opener for me. You haven’t lived until you have seen a huge guy with boobs talking about female hormones and deciding to keep his penis, and how that was a feminist issue.” – Roseanne Barr from “Roseannearchy: Dispatches from the Nut Farm“

From Barr I probably shouldn’t expect much.