Over the last few days I’ve seen a lot of anger from the trans community over the Roseanne Barr controversy. I do understand the anger. We are often portrayed as being sexual deviants who just want access to women in bathrooms and showers.  I do understand the fear we live under, every single time we attempt to urinate. I get it. But  when you do something like this, in response to hatred: 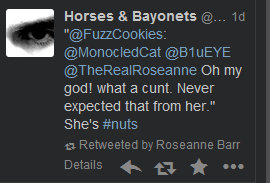 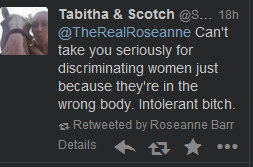 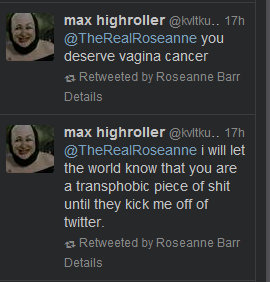 Like I said, I understand the anger. But this kind of response is neither helpful (engaging in behavior that is sexist, especially) nor does it move our rights forward. If anything, it causes polarization and division.

When I think of these online conversations and I get angry, I channel it into a response at the IDEA that is bad, not the person. It may seem counterintuitive to not respond to a fight with anger. But I think of the words of the gay civil rights icon, Bayard Rustin. Here he’s talking about a US Senator, James Eastland, that said (among other things) that “separation promotes racial harmony”, opposed the confirmation of  Thurgood Marshall, and voted against the 1964 Civil Rights Act. Of Eastland he said:

“When I say I love Eastland, it sounds preposterous–a man who brutalizes people. But you love him or you wouldn’t be here. You’re going to Mississippi to create social change–and you love Eastland in your desire to create conditions which will redeem his children. Loving your enemy is manifest in putting your arms not around the man but around the social situation, to take power from those who misuse it—at which point they can become human too.”

Nonviolent lunch counter protests in the 60s weren’t something that just spontaneously happened. They were planned and trained for.

and they KNEW that there would be anger and hatred and bile spewed at them. What won the day?

They made a PUBLIC contrast. They contrasted hatred with courage. They received physical blows but did not retaliate. They won hearts and minds because the contrast was so striking that no one with a heart could see their treatment anything other than cruel.

In the digital age our fight isn’t on the streets, but online. We must always be mindful that others are watching and  judging us by the words and tone we use. Even in the face of vile hatred and bigotry, we need to stand firm. Respond only to ideas, do not attack the person.

A troll in the community that will remain nameless has a cycle:

Responding to a transphobic remark from someone with a vitriolic personal attack won’t help the community. While you might make yourself feel better, you’re damaging the community and our struggle.