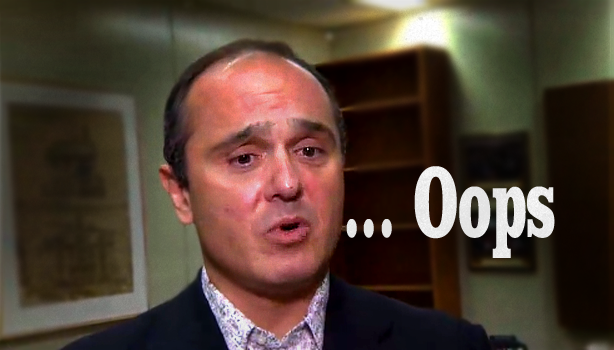 In what has to be one of the most facepalm-inducing interviews I’ve ever watched, Canadian school board trustee, Sam Sotiropoulos attempted to explain why he’s not a bigot for promoting bigotry.

The above interview occurred after Sotiropoulos posted a few transphobic tweets.

The article Sotiropoulos promoted states, “Dr. Joseph Berger has issued a statement saying that from a medical and scientific perspective there is no such thing as a ‘transgendered’ person.” Dr. Joseph Berger’s stance on trans people seems to be what informed Sotiropoulos’ opinion when he tweeted:

Until I see scientific proof that transgenderism exists and is not simply a mental illness, I reserve the right not to believe in it. #TDSB — Sam Sotiropoulos (@TrusteeSam) August 30, 2014

Sotiropoulos failed to note that his “expert” is also so extreme on trans issues that even NARTH has publicly distanced itself from Dr. Joseph Berger’s particular brand of “expertise” on this topic. Let that sink in.

NARTH has emerged as the preeminent source of what many regard as “junk science” for the religious right — psychology that underpins the anti-gay movement’s fervent opposition to equal rights and stigmatizes LGBT people as mentally sick. – Southern Poverty Law Center

“I suggest, indeed, letting children who wish go to school in clothes of the opposite sex — but not counseling other children to not tease them or hurt their feelings. On the contrary, don’t interfere, and let the other children ridicule the child who has lost that clear boundary between play-acting at home and the reality needs of the outside world. Maybe, in this way, the child will re-establish that necessary boundary. It is a mistake for various interfering, ignorant, and biased busybodies to try to ‘counsel’ the other children into accepting the abnormal. It is very healthy to be able to draw the line between what is healthy and what is sick.”

Dr. Joseph Nicolosi – a co-founder of NARTH – said, “NARTH disagrees with Dr. Berger’s advice as we believe shaming, as distinct from correcting can only create greater harm. Too many of our clients experienced the often lifelong, harmful effects of peer shaming. We cannot encourage this.”

When confronted about his promotion of an “expert” who endorses bullying trans kids, Sotiropoulos had a twitter meltdown, noting that lots of groups are bullied. Apparently, Sotiropoulos thinks that having an anti-bullying awareness campaign for a group who, when physically bullied at school, more than 50% attempt suicide, is evidence of reverse discrimination against non-gay/trans kids:

No awareness campaign at #TDSB for any other types of bullying than sexuality or gender, the 2 rarest of all in our schools #TOpoli #voteTO

During an interview with radio host, Jim Richards, Sotiropoulos eloquently clarified his position on Joseph Berger:

To date, and I’ve cited an expert in the field, uh, an expert in psychiatry, a rather distinguished gentleman, who is of the firm opinion, and he’s not just some fly-by-night [unintelligible]. He was the head of the American Psychiatric Association, and, as I said, he’s quite distinguished and accomplished in his field, and he states explicitly that as far as he’s concerned, he sees no scientific evidence for the notion in and of itself.

Not only did the American Psychiatric Association make it clear that transgender people are not mentally ill in 2012, they have firmly stated their support for the civil rights of transgender people. While Sotiropoulos was quick to appeal to the authority of the APA, it seems that he’s oblivious to the APA’s actual position, particularly points number three and four.