Before you read further, check out this Storify wherein Victoria Brownworth claims that I am a pedophile who pays to have sex with children:

Earlier this year, I wrote a piece about cisprivilege and how it showed up in a print article wherein Victoria Brownworth was curious about what the genitalia of a trans kid looked like – someone she says she believed to be a minor – and got the kid to allow her to gawk at his genitals. She detailed what the minor’s genitals looked like for her readers and our culture wholly endorsed and supported what would be, had this not been a trans kid, viewed as a crime. I additionally detailed the way TERFs rushed in to support an adult’s right to look at the genitals of a minor.

That story can be read here:

In the article, Brownworth says – numerous times – that she believed the kids to be minors. I ask she if she believed that the youth she talked into exposing himself to her was a minor and she said yes: “it felt creepy/wrong because I was an adult”

Note that she herself says that her actions made her feel “wrong” and “creepy.”

Brownworth then tried to change her story. She then began claiming that these kids were emancipated minors. It should be noted that this is never mentioned in the article. I’d like to also note how preposterous it is to assert that these homeless and/or poor kids had the legal wherewithal to go through the court system and become emancipated. I guess she thought that changing her story to say that all the kids were over 18 was a strategy worth trying: “I assumed everyone was 18 or over”

“I assumed everyone was 18 or over” – which is the exact opposite of what she wrote in the article I critiqued:

As I scanned the room, I realized the 24-year-old Rolanda was likely the oldest person there except for me… Two young boys — or girls on the way to being boys — looked sullenly at me from a corner of the room. But the others — all budding MTFs — swarmed around me like I actually knew Oprah and not just her favorite spritzer… They remained in the corner, trying to look as tough as their 16- or 17-year-old selves could muster… I ask him how old he is. He turns away as he mumbles “18” and I subtract two, possibly three years. – Victoria Brownworth

Brownworth responded – not by offering an apology for her behavior – but by going on the offense. She felt that it was incredibly mean of me to point out that her actions were privileged, unethical and that I reported her actions to Child Welfare.

In retaliation, she took to Twitter and began a concentrated, purposeful campaign of libeling me that has continued for most of this year.

It began with Brownworth publicly lying, claiming that her paper was filing suit against me. I fact checked that and it was proven false.

She then freaked out and publicly claimed that I had threatened to rape, assault and murder her. That’s a lie and for more than 100 days, I’ve asked that she produce evidence to support those claims. She claimed that my threats scared her so much that she had to file a police report. That too turned out to be a lie.

She then began claiming that I told her that I want her to die in a fire. After she made that public lie, I challenged her to provide any evidence to support her assertion. She’s failed to do so.

Lately, Brownworth has begun claiming that maybe the article I critiqued was actually “revised” by me in photoshop:

Which a strange claim since, until today, I had not published any scans of her print article. I’d love Brownworth to explain how I photoshopped this word document. Others, of course, joined her bandwagon in demanding that I publish the print article – as if I were hiding something: Here’s the print article with this one caveat: the Philly Child Welfare department informed me that it may be illegal to reproduce Brownworth’s descriptions of the minor’s genitals. I have therefore censored the parts which may be illegal. If you would like to request an uncensored copy of the article, you can do what I did: contact the Philly public library for a copy. Send a request for this article to erefNEWS@freelibrary.org and for a small fee, the library will scan and email you a full copy of the article. For those who wish to quibble over whether it would be legal for you as an adult reporter – not a doctor, not in a hospital and not with parental consent – to talk a 15 or 16-year-old to letting you look at their genitals, please post into a reply an example of wherein a reporter – without parental consent and outside the context of a hospital – gained access to a minor’s genitals and then went on to report, in explicit detail, what the minor’s genitals looked like.

If you can’t do it, I’d say there’s a reason for it (even if you refuse to acknowledge that reason). I’d also say that there’s a reason that when this was done to a trans kid, it suddenly became both legal and ethical, to the point where the adult is given an award for it: 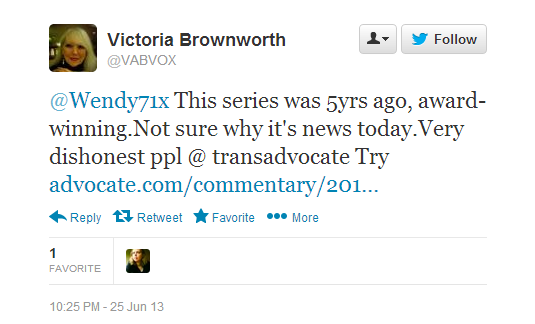 And, to add to the various lies Brownworth keeps spewing, now she claims that I’m a stalker and a slanderer:

Notice that Brownworth again fails to support her assertion with any evidence, even when she @s me on twitter to inform me that I’m a stalker. And let’s be honest here. It’s been…

… since I requested that Brownworth produce ANY evidence to substantiate her libelous claims and she’s failed to do so. Here, yet again, this professional “award-winning” journalist is caught in the act of spreading more malicious lies about me. Lying to libel others seems to be a pattern for Brownworth.

If you think it’s only trans people who have a problem with Brownworth’s behavior, consider what cisgender feminists think of Brownworth’s supposed professionalism:

This excerpt is from a HuffPo Live roundtable discussion on feminism. In the discussion were feminist opinion leaders, including Victoria Brownworth (the voice on the phone line).

At this point, I have to ask the Advocate, SheWired, The Real Curve, The Philly Gay News, and the Huffington Post why they continue to pay this individual to be the voice of queer people. Why do they time and again hire this white, affluent, hubris, lier? How many times must her obdurate behavior be exposed before you finally figure out that there’s a problem and that you’re enabling it?

Writers for the TransAdvocate work hard to bring you news and commentary. If you found this article meaningful, let the author know that you appreciate the work they do with a tip!
In category:Cristan Williams
Tags:hate TERF transphobia
Next Post

The TransAdvocate has documented the dirty tricks anti-trans groups are playing in California. We documented how the Pacific Justice Institute (PJI) falsely claimed that a trans girl had been harassing cis girls in the restroom so they could use it…
Read
Previous Post

The Blind Push For ENDA And Your Advocacy Dollars

Tomorrow you'll  likely to see a big push from inside the beltway "equality" organizations pushing for passage of the Employment Non-Discrimination Act (ENDA). From a recent e-mail plea: Dear United ENDA Coalition Organizational Leaders: We think you'll agree that our…
Read
Random Post

Gay Media: Maryland Trans Community, Love The Crumbs We Give You

As much as trans people seem to want to believe it, gay (GayINC) media is not their friend/advocate/ally. Tom Lang, of Know Thy Neighbor said: It seems that the hard work of transgender and transsexual activists inside and outside of…
Read
Random Post

On Saturday, January 4, 2014, the Toronto Star published an anti-trans hoax without first fact checking. The claim was that a 70 year old woman was undressing in a Toronto-area YMCA when a male-bodied individual "who was pre-everything" and who had…
Read
Random Post

Reparative Therapy for Trans Youth: Kenneth Zucker is Different from George Rekers How?

Watching this recent CNN story on reparative therapy and the damage it did to George Reker's poster child (Kirk Andrew Murphy), I was struck by the similarity of this story and a child that NPR covered about childhood gender identity…
Read