The TransAdvocate has documented the dirty tricks anti-trans groups are playing in California.

Here again, we caught anti-trans signature gatherers lying to the public in order to scare them into supporting discrimination against trans kids: 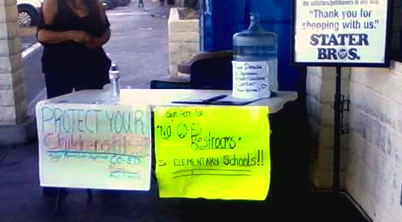 An advocate in California snapped this photo while coming out of a Stater Brothers store. The signs falsely asserts that trans protections = co-ed restrooms. This is a violation of California Election Code § 18600 as it is a fraudulent representation of the facts. Note that they’re also scaring people into giving them money.

To be clear: AB 1266 never asserts that cis boys get to hang out in the girl’s restroom. That’s a lie. Let’s also be clear that after a decade of having California-style policy in place all over the country – even in places like Houston, Dallas, El Paso, San Antonio Texas, the best these anti-trans groups can do is lie in order to pretend that these policies are problematic. 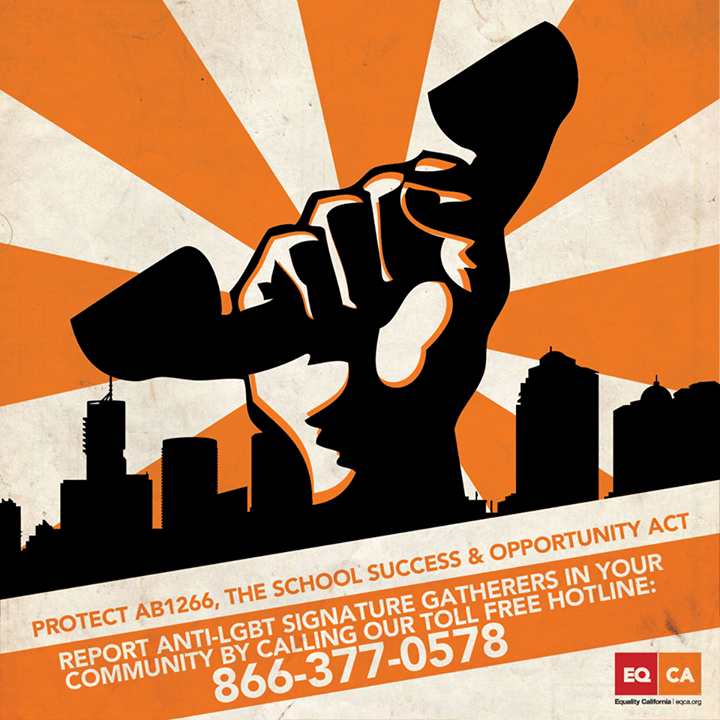 When you see them in California, report them by calling 866-377-0578. It’s important to document the election fraud that these anti-trans groups are engaged in.

It's hard for me to imagine the actual discussion language in meeting between Pacific Justice Institute's (PJI's) president Brad Dacus, staff attorney Matt Reynolds, and board member Tim Lefever -- all attorneys -- where they developed plans and talking point…
Read
Previous Post

Before you read further, check out this Storify wherein Victoria Brownworth claims that I am a pedophile who pays to have sex with children: Earlier this year, I wrote a piece about cisprivilege and how it showed up in a…
Read
Random Post

Months after the Minneapolis Star Tribune was strongly criticized for their coverage of Cece McDonald's case, despite local trans activists' earnest attempts to work with the Star Tribune to better understand the paper's responsibility to use professional standards concerning respectful…
Read
Random Post

So lots of new stuff to report: First, I have a brand new email list! If you sign up for it, you will receive monthly(ish) updates about all my upcoming performances and speaking events, newly released books, articles, music, and…
Read
Random Post

Today, HRC has joined GLAAD in condemning the false reports of trans harassment by an ex-gay/creationist group, the Pacific Justice Institute (PJI). The PJI is the organization at the center of an international effort to malign one transgender kid. Last week, the PJI issued the right-wing community talking points for use in…
Read