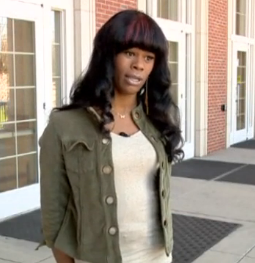 On March 19th, Ms. Williams was detained by a campus school guard while exiting the lady’s room bathroom telling her that they had heard reports of a man in the restroom and asked her for her college ID.

Ms. Williams then presented her ID, which clearly identifies her as female. Despite that the guard persisted in mockingly questioning Ms.Williams gender and called reinforcement. When the other guards arrived, they surrounded Ms. Williams eventually escorting her off campus.

The next-day Ms. Williams intent on resolving the incident went to the Dean of student life, who informed her she was suspended for not presenting her ID to the guards.

Ms. Williams told the TransAdvocate the Colleges version was simply not true, and she has proof. “When the guard first approached me, I called my attorney who listened to the entire incident. She heard me present my ID to several officers. She heard me then ask if I was free to leave”

Ms. Williams begun the process of changing her legal documents say she started transition in 2010 and began living in her authentic gender in 2012 when she turned 20.

The school says she won’t be ‘protected’ if she uses the lady’s room until she complies with their demands. “The school is requiring me to show proof of my gender,” says Ms Williams, “but they haven’t specified what they need to see.” Meanwhile, Ms. Williams says she is attending classes but her attendance is suffering. “I don’t feel comfortable on campus” she says “my attendance is only so-so.”

Attorney Sarah Demarest with Charlotte’s LGBTQ Law Center has issued an official statement demanding that CPCC comply Title IV, apologize to Andraya Williams and in the future that she allowed to use the correct restroom without school harassment.

Ms. Williams classmates, community, and even those who have never met her are outraged over her mistreatment. They are organizing a protest on Facebook scheduled for Friday April 4th at 12pm at the corner of Elizabeth and Kings. Ms. Williams said she will be attending and when asked what she would like the school to take away from the protest Ms. Williams responded “it’s time for policy changes and education on trans rights. It’s not OK to discriminate” Writers for the TransAdvocate work hard to bring you news and commentary. If you found this article meaningful, let the author know that you appreciate the work they do with a tip!
In categories:Best of TA Kelli Busey
Tags:Cisprivilege civil rights hate in the media Non-Discrimination transphobia
Next Post

By Cathy Renna @cathyrenna Possibly inspired by Laverne Cox and Orange is the New Black, I blurted out the title of this post at a recent panel about media coverage of transgender issues, as I was trying to put into context…
Read
Previous Post

Human rights advocates braved the elements Saturday in Harlem to show their angst over the church sign promoting violence against the LGBT, and for good reason. Just 20 blocks away, last year, fists were thrown at a transgender woman who…
Read
Random Post

As a white person, I never have to think about race, except on those rare occasions when I am in a non-white majority space. I never think about being a U.S. citizen except when I am outside the country. While…
Read
Random Post

(The MacDonaldization of Intersex activism) My response to the following article Why Doesn't ISNA Want to Eradicate Gender? By Curtis E. Hinkle Imagine a world in which the main division between individuals were size. This would be the first thing…
Read
Random Post

Recently the daughter of Ozzy Osbourne, Kelly Osbourne, opened up about her "humiliation": "Having to tell them (my parents) my fiance had cheated on me with a tranny who sold his/her story to the press (was the most uncomfortable moment).…
Read