The Observer recently featured a photograph of a tourist casually sexually assaulting a trans feminine performer by slipping his hand under her dress and squeezing her breast while posing for a picture. The photo was featured as one of the best photographs commissioned by the Observer. The same photograph was published in December of 2013 and focused on the increase in Chinese travelers to Pattaya, Thailand due to the recent changes in travel restrictions. 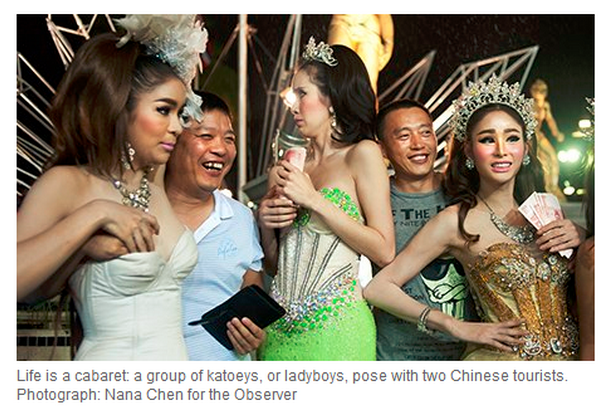 This photograph, as well as a second photo of another tourist posing with a trans feminine performer with his hand on her breast, also appeared in a series of photos on The Observer website.  Other photos within the series showed Chinese people enjoying their trip to Thailand by swimming at the beach, enjoying the architecture, and playing with animals at the zoo.

After noticing the photograph Nya Lendor, of Feminists Against Transphobia, contacted The Observer.

I am writing because I have noticed that the Observer Guardian has chosen to celebrate a photograph which could be perceived as one which records/depicts a sexual assault taking place. The photo shows a tourist with their hands down a person’s top groping her breast. She looks uncomfortable and like she is trying to pull their hands out of her top.

The photo in question is in the link below. I can’t find the other place where I first saw it:

Whatever the reality of the situation, the fact that there is even a shred of doubt as to the nature of this image suggests that it has no place in a series of celebrated photographs.

The fact that there is no mention of what is occurring in the caption further normalizes and trivializes the abuse of women’s bodies, particularly trans* women and women in the sex and entertainment industries.

I would ask that you remove the photograph immediately.

Julian Coman has sent me your email. I’m the Observer’s readers’ editor and look into complaints to the paper.

This photograph ran in the Observer Magazine, alongside others which are also reproduced online, where you saw it. It illustrates this section of the article:

“Back in Pattaya, tour guide Angela Wu says shopping is rarely the sole reason for a foreign trip. Wu, 45, from Shanghai, is chain-smoking in the lobby of the Miss Tiffany transvestite cabaret show while her tour-group charges watch the evening’s glittering performance. “Most people travel because they want to see something they can’t see in China,” she says. “They’re interested in historical sites and famous art in Europe, and natural scenery in America and Australia.”

“Pattaya’s spectacular ladyboys are another example of something they can’t see back home. (On one tour group’s itinerary, the Chinese word used to describe them translates as “person-creatures”.) After the show, the sequin-bedecked performers in towering headdresses crowd into the lobby to pose for photographs with tourists for an extra charge of 40 baht (80p) a time. “Please inform management if the artists misbehave,” says a large sign warning about potential overcharging. But on this occasion it’s some of the Chinese men who misbehave by trying to squeeze the ladyboys’ breasts during their photo sessions. “They think it’s OK because the breasts are not real,” says Wu wearily.

“Wu, who has worked as a guide for 20 years within and outside China, says taking her countrymen and women overseas is like “going into battle”. “No decision is ever simple. Everyone has an opinion that must be heard.” But she doesn’t believe that Chinese tourists deserve a wholesale reputation for being badly behaved. Like any nation, she says, “there are polite people and rude people” and most extreme cases of uncouth behaviour are isolated incidents that shouldn’t tarnish all Chinese people.”

As you can see, the piece describes the incident and quotes the tour guide condemning the behaviour.

It is the job of a newspaper to tell people what is going on and to expose such behaviour. To suppress the picture would be to suppress the truth.

It would appear that readers understand this: I receive many complaints if the paper runs what readers consider to be an inappropriate photograph. Yours has been the only complaint we have received about this picture. That doesn’t mean your complaint is not valid but it does show that it is not shared by the 12 million people who read The Observer in print and online.

Thank you for writing,

Absent from Pritchard’s explanation of the context the photograph is given, is that this context is presented several paragraphs after the photo is presented with the caption: Life is a cabaret: a group of katoeys, or ladyboys, pose with two Chinese tourists.  He also fails to recognize that The Observer included the photograph with no context what-so-ever among other pictures of tourists out having fun as well as presenting it as one of “The best original photographs from The Observer” with the caption:

A group of katoeys, or ladyboys, pose with two Chinese tourists at the entrance of Tiffany’s Show, a major tourist attraction for its cabaret style performances in Pattaya, one of the Thai cities most visited cities by Chinese tourists. You can see more from this wonderful set of pictures here.

Lendor responded with the following e-mail and, as of the publication of this article, is waiting for a reply:

Thanks for taking the time to get back to me. Where I initially saw the photograph was not in the context of the article you quote.

When I searched using Google for the image in order to include a link in my email, the article I linked in my previous message came up rather than a link (which I now include in this email) where I first saw this image.

I understand that you feel you have to report things as they are and I agree – that’s the point of a newspaper. Out of context, however, the image is very troubling, particularly as it is not clear that the Guardian has acknowledge[d] the problematic nature of the image. I include the original link in which I saw the image below:

From this, you can tell that I had no context, just an image with a blithe caption.

I would appreciate it if you would consider at the very least re-captioning the image in both the article and the gallery to make it clear that the Guardian/Observer does not condone what is being depicted in the image. The current captions do not seem sufficient given the nature of what is occurring.

Thank you for your response.

Stephen Pritchard appears to be placing an emphasis on the number of complaints he receives concerning the image, viewing silence as consent, and not evaluating the inherent problematic nature of presenting sexual assault and dehumanization as a tourist attraction.  The editors of The Observer may consider that behaviors and labels popular among the majority, not subject to intense public outcry, may not necessarily be those that are respectful or right, and that Lendor is not the only person among their readership that is concerned.