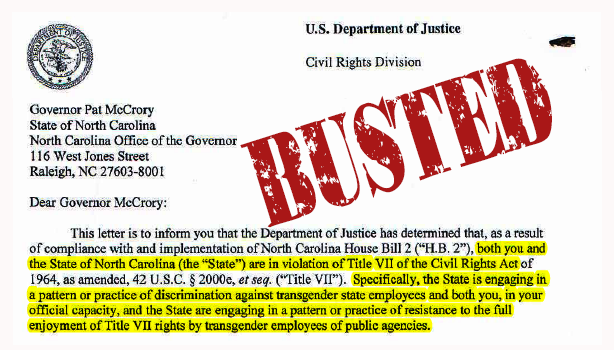 The US Department of Justice (DOJ) has given the State of North Carolina until Monday, May 9, 2016, to cease discriminating against trans people:

Both you and the State of North Carolina (the “State”) are in violation of Title VII of the Civil Rights Act of 1964… Specifically, the State is engaging in a pattern or practice of discrimination against transgender state employees and both you, in your official capacity, and the State are engaging in a pattern or practice of resistance to the full enjoyment of Title VII rights by transgender employees of public agencies.

We will take no action by Monday… That deadline will come and go. We don’t ever want to lose any money, but we’re not going to get bullied… – Tim Moore

Anti-trans ideologues have often asserted that they are the targets of bullying, alluding to a conspiracy on the part of LGBT organizations who somehow control when and where private corporations choose to invest. North Carolina Governor Pat McCrory (R) complained:

Since the North Carolina legislature overturned this far-reaching Charlotte mandate, the Human Rights Campaign has led a coordinated assault and smear campaign. This national special-interest group, which is funded by anonymous donors, is attempting to bully companies, entertainers and anyone else who disagrees with its agenda.

Don’t expect these social terrorists like the HRC to let-up on the pressure. There is no meaningful dialogue with them, only total domination. They are an unbending, immovable, aggressive, insistent force that would have every norm and moral turned on its head – every objection to their way vilified, penalized, fined, and criminalized by law.