I used to be outraged when the non-profit sector of the “LGBT” community tried to exploit the Transgender Day of Remembrance (TDOR), but after repeated attempts (1, 2, 3, 4) I have come to expect it. This year’s attempt comes from the Massachusetts Transgender Political Coalition’s (MTPC) TDOR page: 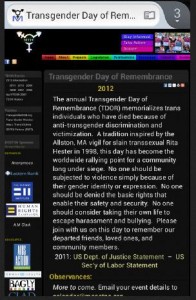 You too can become a Boston TDOR sponsor. You can make MTPC’s TDOR page look like a sponsored NASCAR vehicle!

As I mentioned before, the intention behind the TDOR is best summed up by its founder, Gwen Smith:

“The Transgender Day of Remembrance serves several purposes. It raises public awareness of hate crimes against transgendered people, an action that current media doesn’t perform. Day of Remembrance publicly mourns and honors the lives of our brothers and sisters who might otherwise be forgotten. Through the vigil, we express love and respect for our people in the face of national indifference and hatred. Day of Remembrance reminds non-transgender people that we are their sons, daughters, parents, friends and lovers. Day of Remembrance gives our allies a chance to step forward with us and stand in vigil, memorializing those of us who’ve died by anti-transgender violence.”

Having a “good purpose” for raising money isn’t enough of a reason for doing so. Would you have a fundraiser at:

“How would you feel about a couple of people from the local high school attending your grandmother’s wake wielding a coffee can to raise money for their baseball team?”

In a 2007 he wrote “An Open Letter to the Transgender Community” he said:

“The attempted manipulations and attempts to capitalize on the Transgender Day of Remembrance by some of our national organizations and so called leaders is nothing less than appalling and downright sickening.

The Transgender Day of Remembrance is not a place to put on your party hat, it is not a celebration of life, nor is it an opportunity for your organization to fund-raise, it should not be an event where the keynote speaker gets paid a lot of money to come and sell the latest autobiography and should not be a political event where people schmooze with their donors from a past political campaign and it most certainly should not be sponsored nor cosponsored by The Human Right’s Campaign, an organization who can’t even support us in a Federal Hate crimes bill!”

You don’t need sponsorship to hold a TDOR. You simply need people to read names, and other people to listen (if you need help having an event, read this). If your event looks like a NASCAR sponsor filled car, you’re probably doing it wrong.

The Human Rights Campaign has a history of making moves that make it seem like it is becoming more and more trans aware/friendly/positive. After all, they hired Allyson Robinson: and they gave Lana Wachowski the HRC Visibility Award: So they're…
Read
Previous Post

It’s happened. TERFs and the people who DEFENDED Prop 8 have untied as one voice to proclaim that pre/non-op transwomen - as a group - are 1.) icky because 2.) they’re actually men, and therefore 3.) a danger to cisgender women.…
Read
Random Post

Chris Crain’s editorial lamenting that HRC apparently has finally decided to put their money where their mouth was and decide to become a GLBT rights organization and not just a rich gay white male rights organization, actually brought a smile…
Read
Random Post

What’s In A Word? Context, Ya Fag!

I know I have this obsession with words. I've never particularly liked Queerty.com because it's posts on transfolk generally border on bad taste/transphobia. The most recent edition sports this headline: When I think of the use of the word tranny,…
Read
Random Post

Today we talk to a community news reporter who uncovered a story straight news refuses to cover: a cis woman is beaten in Colorado for being "trans," told that she didn't belong in Trump's America. Additionally, we have Gwen Smith's…
Read
Random Post

I've noticed that there seems to be some confusion about what a Trans Exclusionary Radical Feminist (TERF) is so, here's a quick guide to help you figure out if you're someone who pushes TERF ideology, which is to say, someone…
Read