Ms. Klug, in a phone conversation, told the Advocate about her hiring

“The school was fully aware of my transgender status when they hired me. I made a point of making that clear to them by showing them my legal documents. I wanted to make it clear why my name and gender marker differs on my employment history.”

Ms. Klug said that there were no incidents in the classroom that would have led her suspension. She has reasons to believe that someone without children in school made an issue out of her being transgender  telling planetransgender “I believe someone not connected with the ISD did this out of bigotry”

The school didn’t originally tell her she was relieved from teaching. Ms. Klug relates “Last Tuesday, I noticed my teaching assignments were no longer listed online. I had been meaning to talk to HR, but when I went there I was told that HR was in a meeting with Superintendent John Valastro. I was told without being given a reason, that they wanted to meet with me that afternoon. I was told by them at that afternoon my employment was pending review, and that I wouldn’t be allowed to teach again until they had reached a decision.”

Ms. Klug says that she’s not “the kind of girl that shies away from a fight and wants to let the ISD know that all options remain on the table” including pursuing legal remedies should they fire her.

Ms. Klug is “blown away” by the support she is receiving. There is a Facebook Let Her Teach where she posted this morning:

Good morning friends. Today is the day, is it not?

Much has been said about me by my detractors, much of that is in error. Which is the nicest way I can put it. You, my supporters have rallied with FACTS. I can tell just how passionate you are for the equal treatment of not only me, but all LGBT people in this area.

That is all I seek, Equal Rights. I know you all are as passionate about your position as the other side is. Emotions will be running high at this evenings meeting. I ask that you, my friends, neighbors and supporters, keep a level head, maintain control and be intelligent in your delivery of your opinions. Please observe the rules of “the court”. I pray the other side does the same.

I have, of course, members of the press asking for interviews. I may or may not grant their request. Many of you may have been asked, or really want to be asked for your take on all this. I can not tell you what to do. If you do speak with a reporter, be calm and be kind (no name calling). Rise above the fray. Please.

However, not everyone is happy with Laura Jane Klug teaching.

Parent, Rodger Beard, said he doesn’t have a problem with transgender people but he does think it (sic) she causes a disruption in the classroom:

“I don’t want them teaching, especially at this age group, ah they can do many things in life but if it affects the young people, our little children, and their ability to learn and grown naturally, I think I have an issue with that.”

Klug says she has been substituting at the school for some time and hasn’t had anyone complain before, and is unsure what started all this telling 12 News:

“I have always conducted myself in a professional manner and would never discuss my gender identity in school,” Klug said.”

The school board will be deciding whether to continue her employment tonight, but have been Texas terminating someone solely for their gender expression is in violation of EEOC title VII and could put the ISD at risk a federal civil rights violation suit.

Texas GOP representatives have now rushed in to comment:

The teacher’s name is Laura Jane Klug (born Kurt Klug). I looked him up on Facebook and what I found was an emotionally disturbed and confused older man. He has not always wanted to be a woman. According to a note he posted on his Facebook page on July 7th, 2011 titled “How Much More Can I Take?” Kurt Klug was emotionally distraught and seemingly ready to give in with his life because of the pain of his female wife leaving him. The pain and distraught of his wife leaving him must have driven him to decide that he wanted to become a woman. From 2011 until now, Kurt changed his name to Laura Jane Klug and started dressing up like a woman and acting like a woman. He has joined many lesbian, gay and transgender pages on Facebook. Oh, and he also likes Texas Politician Dan Branch’s page.

Let me get one thing straight, I do not hate this man, nor am I angry at him. – David “I don’t understand what hate means” Bellow, texasgopvote.com

Since people seem to have trouble with the concept of hate, here’s a refresher: 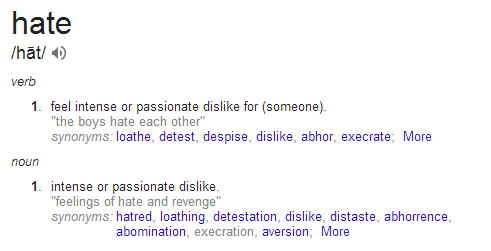 If you strongly reject the personhood of another, that qualifies as hate, David.