Is the National Gay and Lesbian Task Force’s executive director, Rea Carey, a Trans-Exclusive Radical Feminist?  If I was a Christian and “liked”  Fred Phelps’ Westboro Baptist Church on my Facebook page, would you think I was a radical anti-gay Christian Fundamentalist? 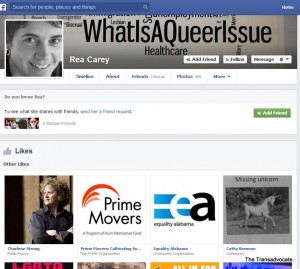 If it’s difficult for you to see, here’s a close-up of one of her “likes”: 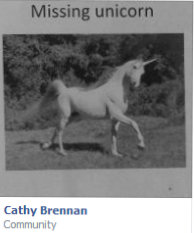 if you’re not sure who Cathy Brennan is, she’s about as iconic in trans circles as Fred Phelps is in gay ones.  So if I were to interview Rea Carey about this issue, I’d ask her a few questions:

Question #1. Do you believe the goal of transactivists is to “erase ‘woman’ from reality” and that trans women are  “insane males”  that are “actively working night and day” and are trying to “erase us, women“?

Question #2. Are you concerned with the condition of my genitals, in the same way Cathy Brennan is? 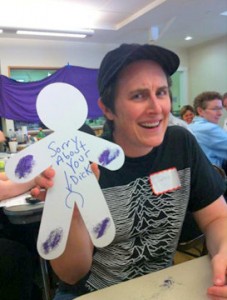 Question #3. Do you think that trans women’s bodies are not a female body, but simply “a mutilated male body“?

Question #4. Do believe that “trans activists and MRAs (men’s rights activists) are the same people“?

Question #5. Do you think that “trans is the shit stain on the underpants of MRAs“?

Question #6. Do you believe “yelling ‘transwomen are women’ sounds a lot like “leave britney alone.”

Question #7. Do you think that trans women who ID as lesbian are “scammers” and do you agree with the statement that  “someone’s mental illness does not mean another group should coddle them or suck their dicks”?

Question #8. Do think “trans are liars“?

and then we’d go to the bonus round and I’d ask her:

Bonus question #1: Does the fact that NGLTF’s Sue Hyde has never made an official apology to Sandy Stone concerning the letter Sue signed trying to get Stone fired from the Olivia Records for being trans, a sign that being a TERF within the walls of NGLTF is “A OK!”?

Bonus question #2: How many openly trans women do you employ?

Bonus question #3: If you support the Employment Non-discrimination Act being fully trans-inclusive, wouldn’t it make sense to actually HIRE trans women yourself and lead by example?

Bonus question #4. Since Lisa Mottet (a cis legislative attorney) is leaving  NGLTF’s Transgender Civil Rights Project to work at the National Center for Transgender Equality, will you hire a trans woman to replace her?