Recently Katherine Svenson, a Delta county School Board member in Colorado, found herself the topic of controversy after remarking that trans kids should be castrated before they use the restroom. What news reports failed to note was that Svenson is the co-founder of an anti-gay ministry: 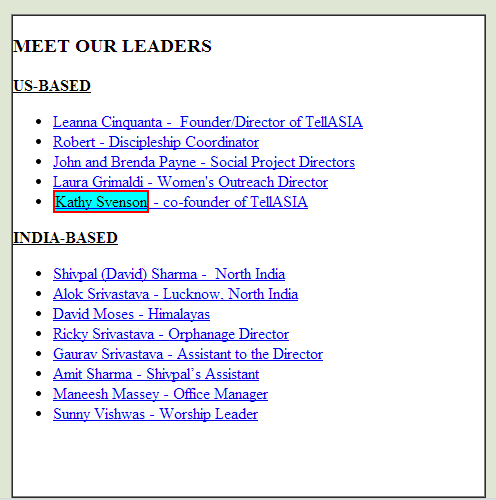 Here’s some of what TellASIA spends its time doing:

It so happened that the dates of the final conference coincided with the date when South Korea’s government was scheduled to vote on a bill that proposed legalizing gay marriage and other anti-biblical legislation. This created the perfect workshop environment to go along with my teaching! I challenged every person in the hall to sign the petition that was being circulated, and to encourage others to do the same, and counselled the leaders on how to build unity with other churches and Christian networks to multiply their influence. By God’s grace the bill didn’t pass so we won an initial victory, though it will go back on the table at a later date. – TellASIA, May 2013

TellASIA is currently run by Svenson’s daughter, Leanna Cinquanta. Svenson spent seven years managing the ministry’s office and is, according to Svenson, still actively involved with the group.

In addition to co-founding a ministry that boasts about its efforts to oppress LGBT people, Svenson is also a member of a notorious anti-gay/anti-trans group run by anti-feminist extremist, Phyllis Schlafly.

On November 21, a Colorado news station reported that Svenson had created a controversy when she handed out a report to the other school board members which warned of an impending menace: transgender children. KREX news reported, “The article in the Education Reporter discusses a new law passed in California, which allows students to use whatever bathroom they wish based on their self-identified rather than biological gender.”

While not quoted in the news report (though it was briefly shown on the screen), here’s what the article said:

In August, California Gov. Jerry Brown signed a law mandating that all public school students be allowed to use whatever bathroom they wish based on their self-identified rather than their biological gender. Even the youngest students will be introduced to transgender issues because the law applies to all students, including those in kindergarten. Older students will use whatever locker room they wish. – Internet version of the Eagle Forum’s “Education Reporter” newspaper sent to their members, September 2013

According to a staff member of Schlafly’s organization, the Eagle Forum, members get a print copy of the newsletter “Education Reporter,” which is what Svenson shared with her fellow School Board members and media:

Not only did the news report seem to perpetuate the false ‘trans kids pick restrooms on a whim’ meme, it also failed to note that the “Education Reporter” is Schlafly’s anti-LGBT publication.

Schlafly, notorious for her role in defeating the Equal Rights Amendment for women in the 1970s, is adept at using the “bathroom meme” – men in the women’s restroom – for political gain. In the 1970s, Schlafly took out full page ads warning that should equality for women happen, men would be able to use both the men’s and women’s restroom: The above story is worth a read as it’s a glimpse into the well worn playbook the Right is currently using against trans equality:

“Law professor Paul Freund objected in 1973 to being “quoted erroneously and out of context by certain opponents of the Equal Rights Amendment” and commented flatly, “I have not staled, and I do not believe, that the Amendment would require the sharing of rest room and prison cells by both sexes.” Yet in 1975 a huge anti-ERA advertisement in Baton Rouge papers credited him with the allegation that the ERA would integrate bathrooms.”

Here’s a clip from one of Schlafly’s 1970s-era anti-ERA pamphlets warning about risks to privacy in schools and bathrooms should women achieve equality:

Does any of this hyperbole – linking civil rights equality with men hanging out in the women’s restroom – from the 1970s anti-ERA fight sound familiar to you? It should. These are all the same arguments the Pacific Justice Institute recently made while they were busy bullying a Colorado trans kid to the brink of suicide.

Since the media failed question where Svenson’s “article” came from or bother to find out if  Svenson was involved with anti-LGBT organizations, I felt that I should do some of the fact checking of my own. So, I picked up the phone and called Svenson:

While Svenson wasn’t able to hear the phone conversation well enough to continue, she asked that we carry on our conversation via email. However, while Svenson was on the phone she confirmed that Schlafly is the source of the materials she shared at the school board meeting and that she was still an active member of TellASIA.

In our email exchange Svenson said that she not only shared Schlafly’s propaganda with the school board, she also shared it with members of the public as well:

I would say [Schlafly’s organization] alerted me that our District would soon be needing to make decisions concerning the situation of men and women sharing what has always in the history of mankind been considered private – their nakedness. [I] shared her report with the school board and with other citizens in the audience saying that I wanted everyone to be aware of what was happening in the rest of the country because eventually it would come to western Colorado.

I asked her if she felt that trans kids posed a rape risk. Svenson thought they did saying, “Totally correct. And that’s all I’m saying, that on the basis of identifying them as of the male sex – capable of producing seed – that they have no place being within view of the private parts of the female sex – defined as having the capability of being fertilized.”

I then asked her about her comments during the School Board meeting, as reported in the media. I wanted to be sure that the media was presenting her comments fairly. I asked her if the following quote was correct:

“I would like to pass out something that shows people what is going on in the rest of the country. Massachusetts and California have passed laws relating to calling a student, irrespective of his biological gender, letting him perform as the gender he thinks he is, or she is.”

Svenson replied, “Correct. And then [the media] left-out what I said next, ‘That means boys will be able to play on girls teams. . .and to use the girls’ locker rooms!”

I asked her to expound upon her castration comment and she was happy to do so:

And castration would only be one kind of plumbing change. I hear some men actually have a whole sex change; a sex change would qualify them as the definition of female –capable of being fertilized – and they could then use the girls facilities. I am not denying any boys any thing; they are free to use the boys facilities.

When I noted that the Delta School District Assistant Superintendent, Kurt Clay rejected her claims, Svenson said, “He cannot make any statement because the Board and our District has not even begun to discuss it.”

I moved on to ask her about the resistance she’s facing from her own constituents. I characterized their resistance and “being angry.” Svenson replied, “What I remember hearing is that some were ashamed of what I said. I would like to tell them, ‘Then you voted for the right person because I am not ashamed to stand-up for the protection of our girls.'”

When I raised the endemic issue of anti-trans bullying Svenson said, “I have read that boys with the gender identity that they are more like girls get bullied when they use the boys’ locker rooms[.] I say, if that is the case then the school will address the bullying problem. Letting them use the opposite gender facility would certainly not be a ‘solution’ for one kind of persons (boys with gender identity of a girl) if it leads to an unsafe situation for another kind of persons (girls).”

TransAdvocate podcast focusing on the situation in Delta Colorado

The Pueblo Chieftain pretty much reported in their November 21, 2013 article Transgender pupil keeps restroom rights that the administrative and criminal cases brought forward by the Pacific Justice Institute are completed. As for the administrative case put forward to…
Read
Random Post

Read the PFOX propaganda about Darrell here. Now that the reparative therapy folks have been discredited to the point that some states are considering legislation to ban it, the ex-gay industry is scrambling to shift tactics and amend talking points…
Read
Random Post

By Matt Kailey It’s not tough to compliment trans people. Like anyone else, we like to be told that we look nice, or that you love our new shirt, or that we did a good job on our speech or…
Read
Random Post

This is a review of the way a single story is handled by two diffident tabloid newspapers. The sensationalistic reporting style is so starkly different that I thought it would make an exceptional case study for the dos & don'ts of trans reporting (even…
Read