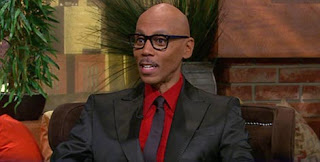 Gay media, did I not succinctly make the points in this 2009 post that RuPaul is not a trans person, emphatically said he was a gay man, and if you want to know what the trans community is thinking about an issue it would behoove you to ask a living breathing transperson?

Guess I need to repeat it for Michaelangelo Signorile’s benefit and the rest of the gay media and vanillacentric Gayosphere.

RuPaul is not a transperson, he is a Black* gay man.

The Black part has an asterisk behind it because of his selling out ongoing support of an odious drag minstrel ‘performer’ when Black people cis and trans, gay and straight have repeatedly stated how offensive that show is.

And speaking of offensive shows, he supported Work It, that waste of television bandwith ABC recently cancelled up to allowing them to use his ‘Supermodel-You Better Work’ song in the trailer. 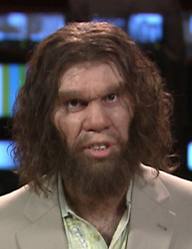 Once again it’s a principle that so simple even the GEICO cavemen get it.

You don’t get to make the call about what does or doesn’t offend me or my community, we do.

Common sense would dictate that if you don’t belong to the trans community and we trans people tell you ‘tranny’ is an offensive term, then don’t use it.

Unfortunately RuPaul and other GL people continue to do so when we tell them ad nauseum not to while arrogantly telling us we should ‘lighten up about it’, ‘not take those words too seriously’ or dredge up the dreaded conservabuzzwords ‘politically correct’.

But let a trans person or cis person utter the words offensive to their community, especially if that cis or trans person is one of color and all Hades breaks loose.  When the pump is on the other foot there’s no mention of the words ‘politically correct’ or being placated by ‘lighten up’ in that situation.

GL community, read my lips and this post.  Transpeople in 2012 are beyond sick and tired of being sick and tired about being disrespected by our foes.  We’re even more incensed about so-called GL ‘allies’ engaging in that nekulturny behavior. We’re also tired of elements of the GL community acting in microaggressive transmisogynist ways toward us not too dissimilar to faith-based transphobes, right wing legislators, and transphobic radical feminists.

We’re not tolerating that bull feces this year and from this moment forward, especially from GL people..

We have told you that RuPaul Andre Charles is NOT a transperson and he damned sure isn’t an authoritative figure on our lives, so stop acting like he is.  He made it quite clear that he is a gay man.  It’s insulting and the height of vanillacentric arrogance to continue to keep trying to push this point when transpeople have repeatedly told you in many ways not to.

Contrary to how elements of you and Mr. Charles disrespectfully put it, it’s not being (Lord, how I hate those conservawords) PC, it’s demanding that you respect our humanity and our lives by following the Golden Rule.

Do unto others as you would have them do unto you.

Michaelangelo Signorile, gay media and the Gayosphere, the next time you want to have a trans perspective about some issue in our community, take the fracking time to actually call a transperson and not an enabler of white gay male groupthink and ask us what we think about whatever issue is facing our community.

And I repeat gay media, RuPaul is NOT a trans expert and never will be because he has no clue, nor does he wish to buy or get one how we live our lives.