In the seemingly never-ending morass of falsehoods coming from the likes of the Pacific Justice Institute (PJI), a new claim of trans harassment is being pushed in the media by members of the PJI-backed coalition of organizations who are trying to dismantle protections for California transgender school children. In this iteration of the trans bathroom meme,  it’s claimed that LA school girls are being harassed by a trans kid who crawls up and over the bathroom stalls in order to watch the girls use the restroom.

Gottlieb said claims that the accommodating transgender students will lead to rampant abuse is fear mongering. “There are other school districts like Los Angeles Unified that have had similar policies that have been very successful,” said Gottlieb. In response, Reese pointed out a recent case in which a Los Angeles-area high school student complained to her school that a transgender boy harassed her and peeked at girls over the stalls. The girl’s family hired an attorney, but has yet to file a lawsuit.

The Salt & Light Council, members of the PJI-backed coalition supporting discrimination against trans children, are known supporters of the PJI’s lie that a colorado trans kid was likewise harassing cisgender girls in the restroom.

Since ABC reporter Michael Chen (@10NewsChen) neglected to fact check the claim before giving legitimacy to the claim by airing it as news, I decided to do it myself:

Cristan: I’m calling to verify some information that I saw on the channel 10 news.

LAUSD: I’m sorry, what information are you trying to verify?

Cristan: Sure, sure, on channel 10 news it says that, at least on their website, that a LA high school student complained because a transgender kid was in the restroom peeking over stalls. And so that’s on the news and I just wanted to fact check that claim. Have you actually received complaints of transgender children climbing over stalls to look at other people as they’re in the stalls?

LAUSD: I will have to check that for you. I believe that was fabricated, but give me one second. I need to verify. Hold on for a second.

LAUSD: Because it’s been a few days since we got that report. So hold on for me.

LAUSD: I apologize for the wait. They did get the complaint and it turned out that it was fabricated by one of the parents who opposes transgender students in schools. So it was an unfortunate situation, to have to put the students through, but it was fabricated. 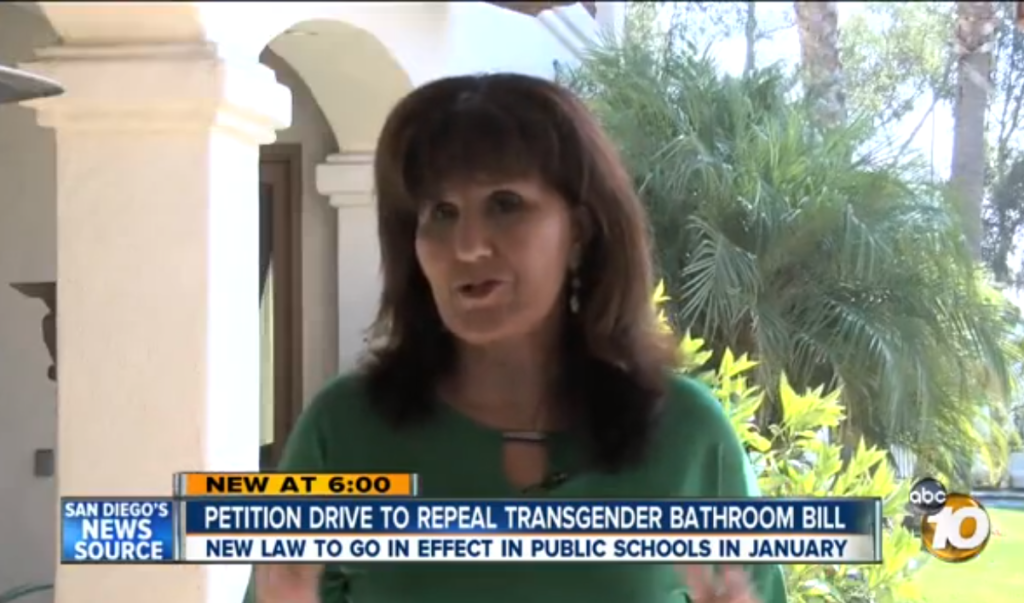 It never ceases to amaze me how willing reporters are to repeat, without fact checking, libelous claims about transgender children. The woman in the above photo is a liar. She, like PJI, is apparently happy to lie to media outlets who have proven themselves more than willing to spread these lies without ever bothering to fact check their claims:

The Pacific Justice Institute (PJI) is the ex-gay organization that stirred up the right-wing word by claiming that a trans kid (who I will refer to as Jane Doe, for reasons of safety) in Colorado was harassing cisgender girls in the restrooms. Right wing media…
Read
Previous Post

The TransAdvocate Q & A is where we answer your questions. If you’d like to submit a question, go to our contact page and send it in. Today’s question is: I'm pre-transition and my gender dysphoria makes my life miserable.…
Read
Random Post

My Exchange with the Southern Poverty Law Center

FB messages between me and the SPLC   The trans community has asked itself recently why the supposed watchdog of extremist hate-groups - The Southern Poverty Law Center (SPLC) - has historically given Trans Exclusionary Radical Feminists (TERFs) a pass. I wondered too and I decided to…
Read
Random Post

Dear President Cheryl Jacques, Irony is the only word I can use to describe the recent release from the Human Rights Campaign (HRC) titled "New HRC Guide Helps Employer's Create Fair Policies For Transgender Staff." You said "This tool will…
Read
Random Post

May Flowers and ENDA’s Showers

I pulled a couple of well versed legal minds in to shed more light on the shared space concerns: "It's problematic for employees who have transitioned prior to employment. As I read it, it means that shower or locker rooms…
Read