Why I’m Kind of Over “Pride Day”

For one thing I remember when “Pride Day” commemorated the Stonewall Uprising.

Back in those days it was political.

I didn’t go to the Christopher Street West Gay Liberation Marches until 1974.  The prior years I was dealing with more pressing issues including surgery dates.

I went to my first Christopher Street West March and Rally in Hollywood, 1974.

It wasn’t a huge event. But there were a lot of TS/TG women there, Hollywood was our turf, home to the few bars and restaurants that would serve us.

[pullquote]From where I stand the suits of Gay Inc or perhaps more accurately LGBT Inc seem pretty much isolated from the depredations of poverty.[/pullquote]A couple of bars had floats, as did a couple of bath houses.  MCC was represented and the Christo-Fascists stood off to the side at the corner of Hollywood and Vine with their signs of condemnation and hell fire.

The Parade/March started at Hollywood and Argyle and made its way west to Las Palmas.  There it turned south down Las Palmas, past the Gold Cup and the Church on Selma Avenue where the male hustlers displayed their merchandise.

The rally was held in De Longpre Park, south of Sunset Blvd and had speakers, not well known celebrity entertainers.

Morris Kight and Jim Kepner introduced the speakers.  To their credit they remembered me from conferences.

The Founders of the Modern Gay Liberation Movement made an effort to reach out, recognize the diversity of a community that was already fragmenting into various identities.

I was there to enjoy the day and photograph the event.  I didn’t have a prepared speech, but I got up and spoke anyway.

I spoke about how beautiful it was to see gay men, lesbians transsexuals and queens all together on this one day and how sad it was that the rest of the year we lived in our own ghettos with others excluded from our bars.

By 1976 the festival had started featuring entertainment as well as speeches. Booths selling beer, food and trinkets now occupied the park which had been the site of a political rally just two years prior.

By the 1980s  the connection to the Stonewall uprising had become tenuous at best.  The AIDS crisis dominated the LGBT scene as did the militant politics of Larry Kramer and ACT-UP.

Then in the 1990s as the AIDS crisis lessened it seemed as though LGBT people became a demographic to the point where community isn’t defined by relationships, affection or love, nor even by politics, but rather by patterns of consumption.

I’m a product of the 1960s, an unrepentant hippie anti-establishment sort. Many years ago marriage was the last thing on my mind, but old age and awareness of my own mortality as well as that of my life partner have made the legal ties and rights purchased with marriage into something desirable. But the marriage parasites shouldn’t start salivating over the thought of getting a bunch of money from us when we marry. We already had the ceremony performed by our peers a year and a half ago.  We just want the paper and the rights. I sure don’t need an expensive dress or ceremony.

Once upon a time being LGBT was like being a hippie in many ways.  Our lives served as an example of an alternative to the consumerist, the patriarchal institutions of the straights.

With our lives we questioned their assumptions.

Now it seems as though we want to be just like them.

Join the military, wage imperialistic wars of conquest to fatten the wallets of the rich.

Get the useless education in being an efficient corporate tool, destroying the planet and walking on the backs of the working class so you too can afford to attend the MWMF/Dinah Shore/Black Party/White Party with a winter share in Aspen  and a summer share in the Hamptons.

There are a lot of pissed off TS/TG folks who feel forgotten.  Too queer to be a part of the A-List LGBT club.  From the floors of the Big Box Stores to the street corners and squats they still see the personal as the political.

Maybe it is time for working class folks, both White and People of Color who are LGBT to realize many of our issues are class related and not simply LGBT related.

I held my tongue over all the Gays in the Military hoopla.  Because there are LGBT people who are in the military and who need the benefits they earned.  But somehow serving as part of the imperialistic corporate war machine always seemed like a pretty dubious right.

Particularly given the history of the US and its support of brutal dictatorships along with the over throwing of elected democratic [pullquote align=”right”]Perhaps we need to reclaim the concept of liberation. Freedom isn’t choosing between the latest iPhone and the latest Samsung Galaxy. Freedom is about having equality and dignity.[/pullquote]governments.

I have to ask, “Who all are you protecting, the people of the US or the profits of the ultra rich corporate overlords?”

This brings me to the latest act of craven cowardliness on the part of the A-List LGBT folks who run the movement:  Bradley Manning is off limits at SF Gay Pride parade, but corporate sleaze is embraced

It seems that some of the A-list corporate suck-ups were afraid of the controversy surrounding Bradley Manning.  Perhaps they were afraid people might be reminded of the gentle, angry, loving people who marched in the 1960s and 1970s when standing for something was more important than buying the next expensive toy, the next exotic and exclusive gay/lesbian cruise.

Maybe as an old post-transsexual lesbian and left wing hippie I hold the A-List LGBT folks values in contempt.

Maybe I have more in common with the LGBT folks who go to the same concerts at the same funky venues as old straights with hippie roots.

Speaking of which…  While a lot of gay men died during the AIDS crisis of the 1980s and early 1990s a lot of lesbians didn’t and a lot of us working class LGBT folks are facing pretty desolate lives of loneliness and poverty as we age.  Social Security is another inconvenient issue.

From where I stand the suits of Gay Inc or perhaps more accurately LGBT Inc seem pretty much isolated from the depredations of poverty.

But I can pretty much guarantee you this issue will not be raised at the Corporate Sponsored Pride Day Celebrations across the nation.  Mustn’t let corporate selling opportunities be tainted with politics or anything that would cause LGBT consumer to think they are living in a dystopia instead of a virtual paradise.

Maybe it is time for a counter-cultural LGBT revolution, one that throws off the chains of identity politics and forges bonds based on common cause with workers, older people, environmentalists, the lumpen folks who are homeless or working the street, the anti-war folks.

Perhaps we need to reclaim the concept of liberation.  Freedom isn’t choosing between the latest iPhone and the latest Samsung Galaxy.  Freedom is about having equality and dignity.  Not having to go to bed hungry, having a roof over your head, not having to do sex work.

I’m pretty sure we don’t need a whole lot of what the corporate sponsors of LGBT Inc are selling. 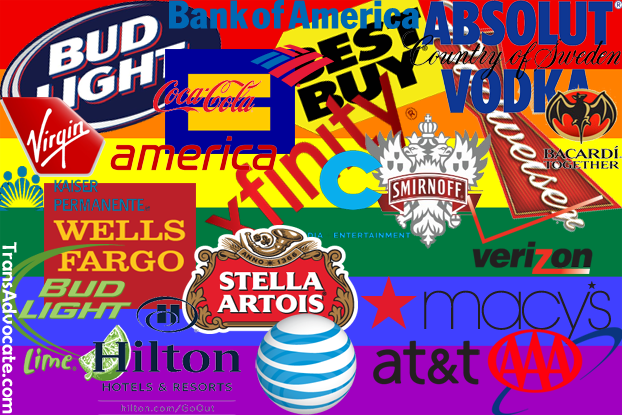 I'm beyond sick and tired of being sick and tired of the near genocidal levels of anti-trans violence that are taking away far too many under 30 transwomen of color before they've had a chance to live their lives.  We…
Read
Previous Post

Misogyny, it's not just for breakfast anymore.

Recently I came across an interesting story in my newsfeed. It seems Sir Richard Branson, of Virgin Air lost a wager to Air Asia Group CEO Tony Fernandes. Sir Branson bet Mr Fernandes over whose Formula 1 team would be…
Read
Random Post

Hillary Clinton is going to be the next President of the United States and look at all the trans friendly people who are endorsing her campaign. Can you imagine endorsing a candidate that doesn't support gays and lesbians? Why not?…
Read
Random Post

Megan Fox is a Transsexual! Lady Gaga is a Hermaphrodite! Daniel Radcliffe is a Tranny Chaser!

In my search of twitter for transgender/transsexual content for the Transadvocate on Twitter, the tweet: "ZOMG Megan Fox is a transsexual!" comes up repeatedly. The genesis of this meme is from Megan Fox herself: I am pretty sure I am a…
Read
Random Post

On Free Speech, No-Platforming, and the Media's "Transgender Debate"

While it's well and good to call out those who denigrate trans people in the media, it's time to take it a step further. Making Money with Media What cis privilege looks like. Chances are that you've seen the clueless being used…
Read
Random Post