When Will I See Black Trans Characters Like Edie Stokes Again?

Back in 1977, in the Jefferson’s fourth season we were introduced to George’s old Navy buddy who was in New York to visit for a few days.   George’s buddy had a reputation in the Navy as a practical jokester and he was eager to see his old friend.

However, there had been some major changes in the intervening years since George had seen his old buddy, and he was shocked to discover Edie’s transition.   He handled their initial meeting badly, but by the end of the show came to accept his old friend and even fell for one of her jokes.

I wish they had made Edie a recurring character, because people needed to know that Black transpeople existed, and not just as ‘tragic transsexuals’ or exotic chocolate sex fantasies.

I’m tired of seeing it, and so is the rest of Black trans America.

One of the things I’ve noted since 2008 is the increase in trans characters on television shows such as Dirty Sexy Money, Ugly Betty, the soap All My Children  and in movies such as Transamerica.   The problem has been that all of the characters were played by white actors or actresses or in the case of the Carmelita character on Dirty Sexy Money, a trans woman.

Even with the African American actresses who have played trans characters like Sheryl Lee Ralph and Kerry Washington, it has been a mixed bag.

What I want to see is Black trans characters who reflect the way that many of us live our lives. We’re tired of seeing the stereotypical drag queens as was evidenced on a Sex In The City episode, or the ‘tragic transsexual’ being killed five to ten seconds after we show up on screen in a murder mystery CSI style program.. 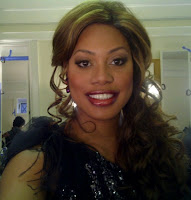 I ain’t mad at Candis Cayne and Jamie Lee Clayton who are getting trans roles lately on shows such as Necessary Roughness and Hung that show transpeople as human beings and Calpernia Addams who continues the fight to ensure we get them..

I wouldn’t even mind seeing the script flipped as they did with Bella Maddo and have trans actors playing cisgender people.

But I want to see the same thing happen repeatedly for Harmony Santana, Laverne Cox and Isis King as well in terms of getting roles that reflect our humanity, too.

It’s not a coincidence that civil rights advances in American society for African Americans, Latinos and the rainbow community happened as more positive portrayals of these communities graced our television screens. Hollywood is just as or more important to advancing the rights of a marginalized community as Capitol Hill and your state legislature is.

I want to see more Edie Stokes style Black transwomen characters who are beautiful, intelligent, and eloquent speakers like many of my transsisters are.  There are Black directors, writers and actor-producers that could make that happen, and I’m going to keep harping on the subject until it does.

Liberal MP Dr.Hedy Fry and NDP MP Randall Peterson just introduced Bills C-276 and C-279 a few days ago in the Conservative majority dominated Parliament. Why did they do so?   Because it's clear that the Great White North and…
Read
Previous Post

Hard Solid Thinking About The State Of The Black Trans Community

One of the things I was contemplating during my downtime at Out on the Hill, while riding the Washington Metro and on the plane ride home is the state of the Black trans community.During the Transgender Person of Color (TPOC)…
Read
Random Post

Being Transgender is a Crime!

On Friday July 29th, 2005 Kim Stankovich turned herself in at the Spokane County Jail. Her crime? Being transgender. Kim is serving a seven day sentence in the county jail for being a transgender. Kim stated in her journal that…
Read
Random Post

“Is the Happy Meal for a boy or a girl?” I had no idea that McDonald’s Happy Meals were gendered, but then I’ve never ordered one before this week. I’ve been suffering from a nasty bronchial thing, which I thought…
Read
Random Post

The MMA world has been a-buzz after learning that MMA fighter Fallon Fox is trans. A popular site for all things MMA recently posted an article that was quite good. The author sought out the informed opinion of experts and the resulting article…
Read