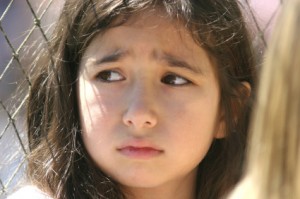 Watching this recent CNN story on reparative therapy and the damage it did to George Reker’s poster child (Kirk Andrew Murphy), I was struck by the similarity of this story and a child that NPR covered about childhood gender identity issues. “Bradley” was treated by Kenneth Zucker for gender identity disorder. Does this:

“So, to treat Bradley, Zucker explained to Carol that she and her husband would have to radically change their parenting. Bradley would no longer be allowed to spend time with girls. He would no longer be allowed to play with girlish toys or pretend that he was a female character. Zucker said that all of these activities were dangerous to a kid with gender identity disorder. He explained that unless Carol and her husband helped the child to change his behavior, as Bradley grew older, he likely would be rejected by both peer groups. Boys would find his feminine interests unappealing. Girls would want more boyish boys. Bradley would be an outcast.”

“‘There was a one-way mirror or one-way window — and some days they would let him choose which table he would go to,’ said Maris, who has read about the experiments.

‘They pretty much told him he wasn’t right the way that he was, but they never really explained it to him what the issue was. They did it through play,’ Maris said.

Rekers wrote that Kirk would cry out for attention, even throwing tantrums, but Kaytee Murphy was told to keep going.”

look much different? What is the difference between Zucker’s approach to trans kids and Rekers approach to “sissy” boys? Why isn’t Zucker being vilified in the same way that Rekers has been?

Zucker is the chair of a workgroup (Sexual and Gender Identity Disorders Work Group) that decides how gender identity issues are defined and categoriezed! In 2010 Andrea James said of the effect of the changes to the Diagnostic and Statistical Manual of Mental Disorders (DSM):

“Its negative effects will harm sex and gender minorities well into the 2020s. It will particularly harm an entire generation of transgender youth and intersex people”

One real difference between Zucker and Rekers is of scope. Rekers’ work only effected those who came under his care or came under the care of his NARTH associates. The changes to the DSM will effect any child that is treated for gender identiy issues.

I wish CNN would shine the light on Zucker and the like the same way that they’re shining it on Rekers. We can’t do anything for Kirk, but we can change the world for Bradley and children like him. If only someone would listen….