A friend and I recently went to see the new Hobbit movie. The lights dimmed and imagine my surprise when the following movie preview flashed across the screen: 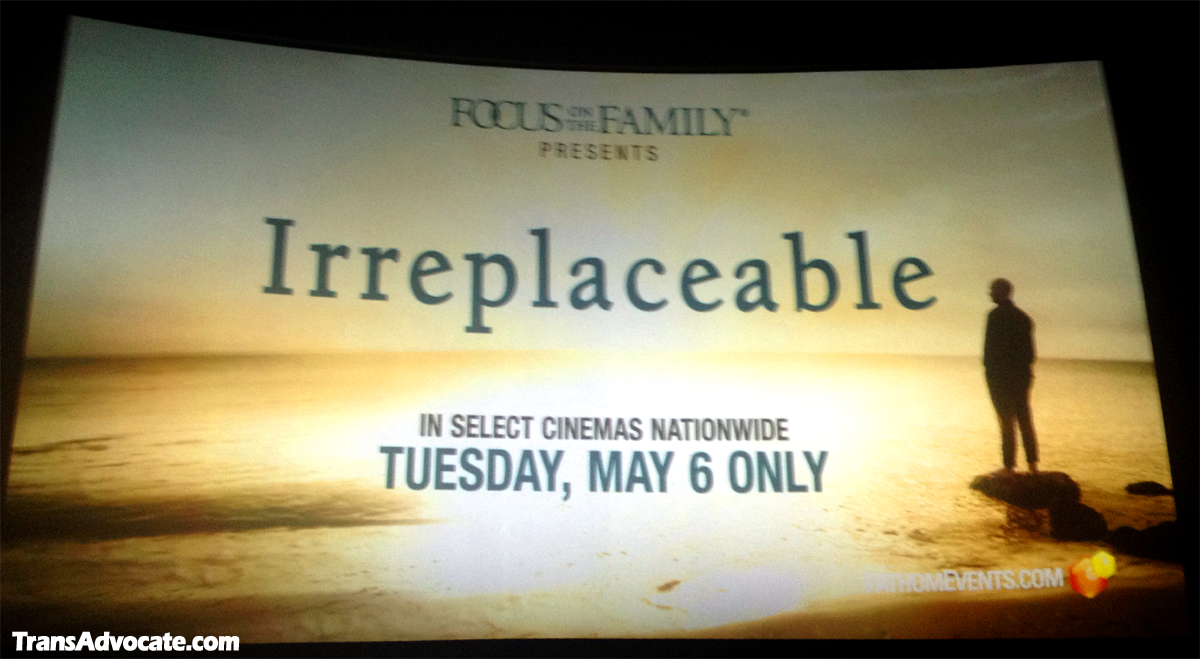 My friend and I both gasped at the same time. This was the last thing we expected to see just before the Hobbit. The very organization that has traumatized untold numbers of LGBT people is going mainstream. If you are a survivor of the conversion therapy movement, you should prepare yourself to see the people who informed the abuse you faced thrust in your face when you visit your hometown movie theater.

After 38 years of targeting LGBT adults and children for demonstrably harmful and traumatic “therapeutic” techniques, on May 28, 2013 Exodus International announced that they would no longer support conversion therapy and apologized for the trauma and suffering their group inflicted on LGBT people. Exodus International President Alan Chamber said, “I am sorry we promoted sexual orientation change efforts and reparative theories about sexual orientation that stigmatized parents.”

The Southern Poverty Law Center, the organization that tracks American hate groups, describes Focus on the Family (FOTF) as one of a “dozen major groups [that] help drive the religious right’s anti-gay crusade.” FOTF continues to actively promote conversion therapy practices, even going as far as to picket the American Psychological Association for not endorsing their efforts to “cure” LGBT people.

FOTF asserts that “homosexual behavior violates God’s intentional design for gender and sexuality” and that “Scriptural teaching that homosexuals can and do change their sexual identity.” FOTF claims that trans people “casts doubt on God’s clearly articulated design by acknowledging a well-known truth and supplementing it with a blatant lie. In this case, this acknowledgment of the two sexes (the truth) is supplemented with the view that male and female are merely two possible genders along a completely “fluid” gender spectrum (the lie).”

FOTF asserts, “Gay and ‘transgender’ activists will not rest until they have utterly laid waste to the traditional and biblical understanding of one of the most important and fundamental distinctions in creation – gender.” They go on to claim that the “body and spirit are meant to be holistically united from the moment of conception. Thus, humans are called to embrace their embodied gender and not seek “sexual reassignment” when they struggle with feelings of gender confusion.”

Make no mistake. FOTF is a group that has caused real and lasting harm. If you go to the movies, you need to know that you may suddenly find your abuser on the very screen you’re paying to see, lauding their new “traditional family” movie.

Fathom Events is the one responsible for promoting FOTF’s movie. I called them up and they made a couple of things clear:

When asked if they had promoted any content with LGBT characters, the Fathom Event representative was unable to name any.

The type of conversion therapy FOTF promotes was banned as being abusive in both California and New Jersey. In fact, text in the New Jersey law notes that the American School Counselor Association’s, the American Psychoanalytic Association and the American Academy of Child and Adolescent Psychiatry all condemn ex-LGBT therapy – the very “therapy” FOTF promotes.

It is not the role of the professional school counselor to attempt to change a student’s sexual orientation/gender identity but instead to provide support to LGBTQ students to promote student achievement and personal well-being.  Recognizing that sexual orientation is not an illness and does not require treatment, professional school counselors may provide individual student planning or responsive services to LGBTQ students to promote self-acceptance, deal with social acceptance, understand issues related to coming out, including issues that families may face when a student goes through this process and identify appropriate community resources.

As with any societal prejudice, bias against individuals based on actual or perceived sexual orientation, gender identity or gender expression negatively affects mental health, contributing to an enduring sense of stigma and pervasive self-criticism through the internalization of such prejudice; and Psychoanalytic technique does not encompass purposeful attempts to ‘convert,’ ‘repair,’ change or shift an individual’s sexual orientation, gender identity or gender expression. Such directed efforts are against fundamental principles of psychoanalytic treatment and often result in substantial psychological pain by reinforcing damaging internalized attitudes.

Clinicians should be aware that there is no evidence that sexual orientation can be altered through therapy, and that attempts to do so may be harmful. There is no empirical evidence adult homosexuality can be prevented if gender nonconforming children are influenced to be more gender conforming. Indeed, there is no medically valid basis for attempting to prevent homosexuality, which is not an illness. On the contrary, such efforts may encourage family rejection and undermine self-esteem, connectedness and caring, important protective factors against suicidal ideation and attempts. Given that there is no evidence that efforts to alter sexual orientation are effective, beneficial or necessary, and the possibility that they carry the risk of significant harm, such interventions are contraindicated.

Focus on the Family has accused the TransAdvocate in trying to oppress them by silencing and censoring them.