It all began with the Media Matters “Misinformer of the Year” winner, the Pacific Justice Institute (PJI) issuing a press release claiming that because they turned in 600k+ signatures (some valid, some demonstrably not), the California law codifying protections for trans children was put on hold:

PJI compounded their campaign of lies by then giving the false impression that they had won a courtroom legal fight against the California Secretary of State:

After calling the California Secretary of State, the Attorney General and Governors office, I feel confident in offering you the following facts:

For the initiative to quality for the ballot and place the law on hold until voted on in November 2014, at least 95% of 504,760 signatures must be valid. As of today, this is their validity rate:

If you’re still unsure how this process works, California has issued a detailed manual.  Recall that PJI’s press release cited a law. I’m more than a little skeptical that PJI knows enough to cite a law, but not enough to know this about the law:

Page 10 of the 2013/14 Statewide Initiative Guide for California

To be clear, when PJI said this…

A referendum has put on hold a 37 word bill which would have opened up restrooms, locker rooms and showers in K-12 public schools to students “irrespective of the gender listed on the pupil’s records.” Known as the Co-ed Bathroom Bill, Assembly Bill 1266 originally was due to go into effect on Jan. 1, 2014. But voters in all 58 of California’s counties have put on the brakes by submitting more than 600,000 signatures to the Secretary of State.

When will the press get it? PJI lies. Stop falling for their claims. Fact check!

The judge DID NOT “order” the Secretary of State’s office to do anything. There has been no trial and no court order was issued.

PJI’s coalition, Privacy For All Students – Stop AB 1266, issued a press release titled, “Privacy For All Students Wins In Court.” No, they’ve not yet seen the inside of a courtroom. A court has not issued any orders.  That’s a lie.  The hate site, World News Daily proclaimed, “Judge Flushes ‘Bathroom Bill’ Election Trick.” Again, that’s a lie. No judge issued any court order compelling the Secretary of State to do anything.

PJI petitioned a court to force the Secretary of State to accept petitions PJI’s group delivered to county offices that were closed for Veterans Day. A judge, at PJI’s request, issued a statement which said that based on the preliminary non-trial evidence, he would side with PJI if a trial had happened. This is a legal maneuver that is sometimes used to encourage an out-of-court settlement between two parties. 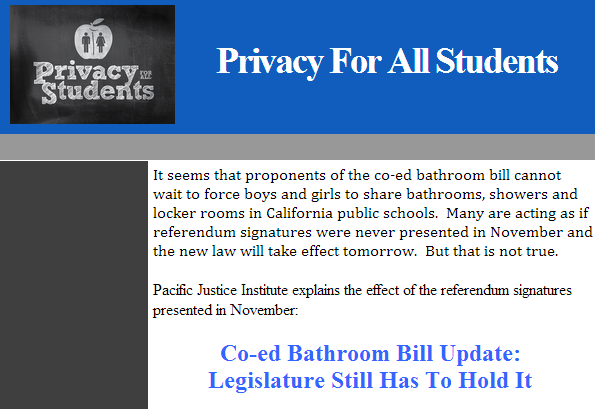 NOTE: The way the math works (because more signatures were tuned in than needed to qualify for a random count), the percentage of the total turned in needs to have validity rate of a little over 81%.

[/column]
In category:Politics
Tags:civil rights in the media Non-Discrimination transphobia
Next Post

An Update On The AB 1266 Signature Drive Spot Check Count

Quoting my anonymous peer activist friend whose helping me with the numbers: San Diego County is in and puts the pro-trans side in a better place than it found itself Friday. Only three counties to go: Los Angeles, San Bernardino…
Read
Previous Post

In their December 30, 2013 press release Co-ed Bathroom Bill Update: Legislature Still Has To Hold It, the Pacific Justice Institute (PJI) claims that the California Success and Opportunity Act (the act that that they're attempting to rebrand as the…
Read
Random Post

By Natacha Kennedy Michelle Goldberg’s awful article in The New Yorker will be considered by many to be just another example of the sort of biased rubbish trans people have come to get used to from the media. This kind…
Read
Random Post

[UPDATED] Trigger Warning! Focus on the Family is coming to a theater near you!

A friend and I recently went to see the new Hobbit movie. The lights dimmed and imagine my surprise when the following movie preview flashed across the screen: My friend and I both gasped at the same time. This was…
Read
Random Post

Today we talk to a community news reporter who uncovered a story straight news refuses to cover: a cis woman is beaten in Colorado for being "trans," told that she didn't belong in Trump's America. Additionally, we have Gwen Smith's…
Read