The push for radical transgender rights in schools is trumping privacy rights at one Colorado high school. A male student at Florence High School who claims to be a transgender has been harassing girls in the bathroom. When parents complained, school officials said the boy’s rights as a transgender trumped their daughters’ privacy rights.

Right wing news outlets are falling over themselves to bemoan the sad state of our public school system now that the law allows transgender students to attack and harass non-transgender girls in the restrooms. I want you to pause for a second and really consider how likely these right wing assertions are. Florence High School is supposedly part of a trans conspiracy to assault school girls in the restroom.

Apparently A LOT of people think this sounds likely because none of the reporters who are pushing this story are bothering to do any fact checking. They simply assume that what they’re repeating is accurate.

Or, as David McCain (@DavdMcCaine) “reported” for the examiner: 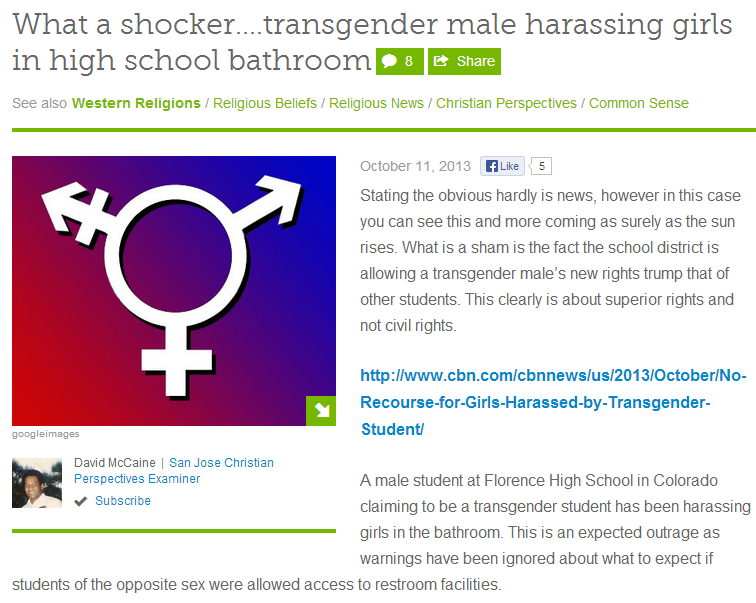 I challenged David about his facts and he admitted that he abdicated  his responsibility to conduct due diligence for a story concerning a trans kid. Let’s be honest here, this is a case where ADULTS are targeting a trans KID, asserting that the kid is predator. Apparently, for people like David, what he’s knowingly doing to this kid is acceptable as long as he has his juicy headline that plays well for his audience. (NOTE: David has since recanted his story and apologized to the trans youth)

At this point, it’s become an international story. Of course it has. It appeals to the trans-rapist/stalker-meme so beloved by the right wing. The fact is that this “news” was generated by a right wing organization that apparently doesn’t have an issue with targeting trans kids in their ideological war. (NOTE: The Daily Mail deleted their story after fact checking.)

Since none of these “news” sites were willing to actually do any fact checking, I took it upon myself to do it for them. Before you listen to the phone conversation me and school Superintendent Rhonda Vendetti, care to take a guess as to how accurate the international reports have been? Yeah, I didn’t think so.

In the interest of being honest about this issue, here’s what one female Florence High School student had to say about this: 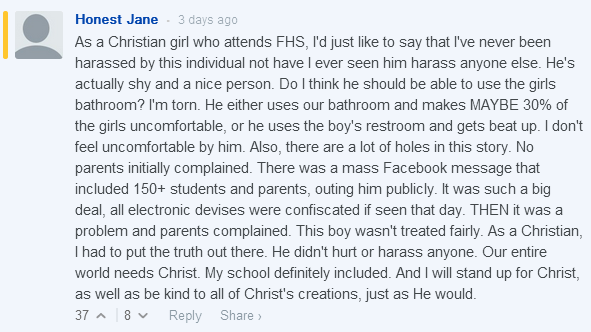 To all the  David McCains out there, SHAME ON YOU! You utterly fail at humanity 101.

Ninety percent of transgender and gender nonconforming people report harassment, discrimination and mistreatment on the job, and the injustices they face have devastating economic and personal consequences, according to a new survey.

A staggering 41% of respondents reported attempting  suicide compared to 1.6% of the general population, with rates rising for those who were harassed/bullied in school (51%)… It is part of social and legal convention in the United States to discriminate against, ridicule, and abuse transgender and gender nonconforming people within foundational institutions such as the family, schools, the workplace and health care settings, every day. Instead of recognizing that the moral failure lies in society’s unwillingness to embrace different gender identities and expressions, society blames transgender and gender non-conforming people for bringing discrimination and violence on themselves. 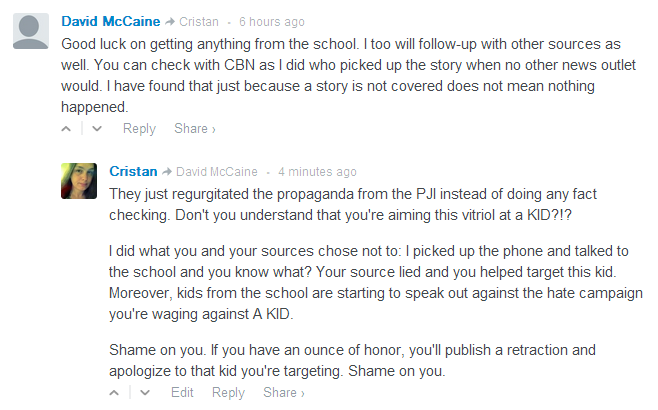