In January, during the SPLC’s internal discussions concerning their yearly hate group list, Cathy Brennan made public her donations to the SPLC on her facebook page. 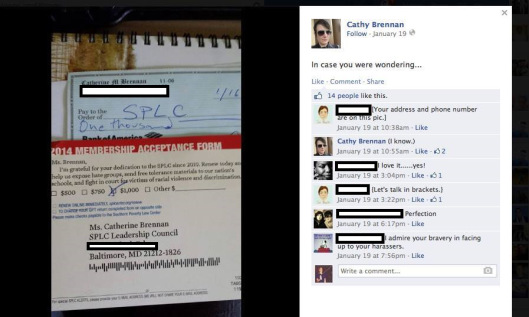 And the SPLC accepted her donation. 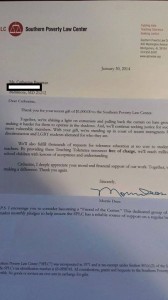 When asked about the donations, the Gender Identity Watch twitter account claimed that Cathy Brennan routinely donated money to the SPLC.  Cathy Brennan has also previously been consulted by the SPLC on issues concerning fringe Men’s Rights Activists. 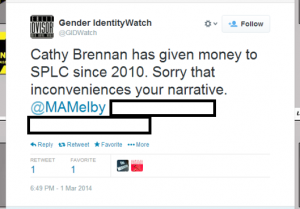 Although Brennan denies ties to the PJI, interactions between Gender Identity Watch and the PJI have been documented by Transadvocate.

Shortly after the new hate group list was revealed, Gender Identity Watch turned on the SPLC in a March 6th blog post attributed to Cathy Brennan:

The Southern Poverty Law Center continues to diminish its reputation by labeling faith-based organizations as “hate groups” for such organizations’ opposition to homosexuality.

The article later accuses the SPLC of having a liberal bias, and being swayed by donations from the “liberal” LGBT community.

The more likely explanation is the GLBT people tend to be liberal, and liberals donate money to the organization.

The article also lambasts the SPLC for “mission drift” for targeting anti-LGBT hate groups.  It uses quotes around the phrases “hate crime” and “hate speech” in the context of the reaction to Matthew Shepard’s murder. Near the end of the article, Cathy Brennan writes:

Importantly, academics have started noticing this trend towards labeling all non-GLBT Movement-approved speech as “hate speech,…”

The article also implies that “faith-based” groups should be treated differently due to their ideological stances being based in religion. 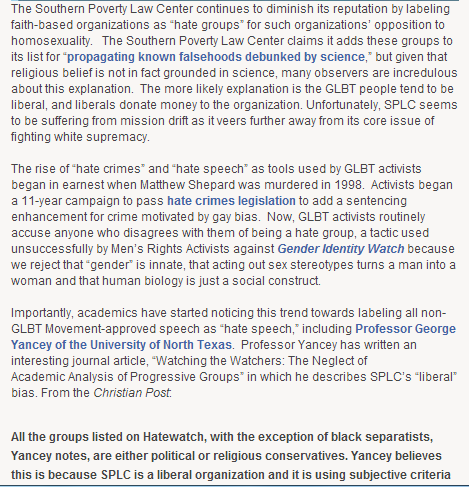 Earlier, in late February, concerned with the donations made by Cathy Brennan, Sandy Hope of A Feminist Challenging Transphobia, contacted Mark Potok of the SPLC.  At first, he was incredulous that Cathy Brennan was actually giving the SPLC money, responding in an e-mail:

I really have no idea what you mean when you talk about our “complicity” with Catherine Brennan. And where do you get the idea that we’re receiving donations from her? I don’t think that’s true.

Hope then provided the SPLC with documentation of Brennan’s recent donation to the organization.  After several weeks, on March 19th, Potok responded in an e-mail:

We will not be accepting any further donations from Ms. Brennan.