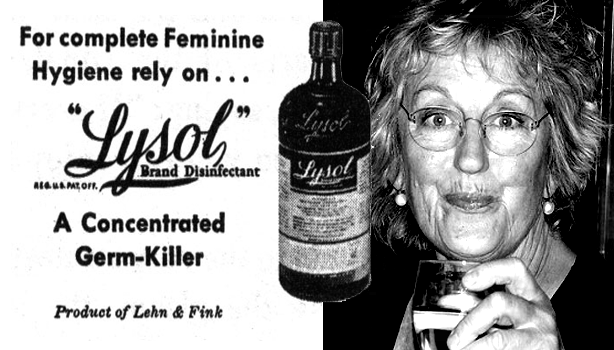 TERFs battle over who has the correct vaginal odor in order to determine female validity.

I’ve noted many times that while Trans Exclusionary Radical Feminists (TERFs) like to speak on behalf of Radical Feminism, the type of so-called “gender critical feminism” they offer is at war with the roots of Radical Feminism. For example, pioneering Radical Feminist opinion leader Andrea Dworkin was supportive of trans women, ensuring that her 1980s-era pro-woman legal activism was trans-inclusive and even asserted that trans medical care should be publicly funded [1]. The very sound of the 1970s-era Women’s Music movement was engineered by an out trans woman because the RadFem Lesbian Separatist music collective, “Olivia” was itself trans-inclusive. Moreover, the largest gathering of RadFem Lesbians ever – the West Coast Lesbian Conference – was explicitly trans-inclusive. The Radical Feminist Robin Tyler ran numerous women’s music festivals, from coast-to-coast for years and they were trans-inclusive. Even when discussing the decades of policy-driven trans-exclusion (AKA, “The Intention”) found in places like the Michigan Womyn’s Music Festival, we have to note that it was the Radical Lesbian feminist, Janis Walworth who started the movement to overturn the trans-exclusionary policy/intention. Likewise, it’s important to note that the Lesbian Avengers facilitated Camp Trans for years. The history of trans inclusion within the Radical Feminist movement is a demonstrable reality that TERFs take pains to hide when speaking for Radical Feminism.

Long-time TERF opinion leader Sheila Jeffreys has made a career out fact fudging where trans bodies are concerned. When she asserted that trans surgeries are patriarchy-driven mutilations, she conveniently edited out the fact that it was her own community – Australian Lesbians – who pioneered trans surgical care in her country:

When Jeffreys spoke at the Andrea Dworkin Commemorative Conference, she credited Dworkin as being her inspiration. Moreover, she spoke at lengths about Dworkin’s pioneering book, Woman Hating while denigrating the bodies of trans women. During her entire presentation, Jeffreys never once noted that – in the very book Jeffreys cited as being the inspiration for her activism – Dworkin advocated that trans people be given free access to trans medical care or that Dworkin viewed gender identity research as being rightly subversive to patriarchy and the very sex essentialism Jeffreys promotes.[2]

Even more telling of the ideological split between TERFs who call themselves Radical Feminists and the actual Radical Feminist movement is the reality that TERFs did 1/3 of the work for a governmental study which effectively ended the coverage of trans medical care under both public and private insurance. In what way does cutting off trans medical access, demonstrably resulting in the death and suffering of an untold number of trans people, resemble the Radical Feminism of people like Andrea Dworkin?

TERFs have worked hard to ensure that people think that they speak for Radical Feminism. Consider the way TERF ideology is consistently – sometimes on an almost daily basis – taken to be Radical Feminism within mainstream media:

The march of transgender rights by Margaret Wente for The Globe, 8/2/14

“In fact, the most bitter battle in the LGBT movement today is between radical feminists and the transgender movement.”

What Is a Woman? The dispute between radical feminism and transgenderism by Michelle Goldberg for the New Yorker, 8/4/14

“They were going to try to explain why, at a time when transgender rights are ascendant, radical feminists insist on regarding transgender women as men, who should not be allowed to use women’s facilities, such as public rest rooms, or to participate in events organized exclusively for women.”

Transgendered advocacy has gone too far by Barbara Kay for the National Post, 8/6/14

“The transgender movement is supported by mainstream feminists. But some more radical feminists argue that transgenderism is not always immutable.”

The Politics of “Transgenderism,” An interview with Sheila Jeffreys for the BBC, 8/7/14

The Radical Feminist “Professor Sheila Jeffreys latest book claims that despite this progress, transgenderism illustrates another way in which stereotypical notions of ‘gender’ hurt people and societies.”

Day after day, the mainstream media is happy to assert that TERF ideology is Radical Feminism. Most recently, Germaine Greer made headlines (in queer media circles) for appealing to a bad vagina smell as being essential to authentic womanhood. During a question and answer session at The Cambridge Union, in which she again asserted trans medical care to be unethical, Greer suggested that trans women aren’t truly women because trans women don’t know what it is “to have a big, hairy, smelly vagina.”

To punctuate the ideological differences between patriarchy dressed up as Radical Feminism – TERF ideology – and actual Radical Feminism, here’s what Andrea Dworkin had to say about the smelly vagina trope both Greer and Jeffreys appealed to:

Women are also wittily rebuked for having filthy genitals… The filth of women is a central conceit in culture: taken to be a fact; noted, remarked on, explicated, analyzed, poetized, pornographized, satirized: genital filth, menstrual filth, excremental filth, filth down there, between the legs, in the hole, the wound oozing blood and slime, dirt and smell; the dirt inherent in the genitals or in her bad character—wash, slut, wash. [6]

Linda Shanko (AKA “Gallus Mag”), the proprietor of the popular TERF site known as GenderTrender  – a site that functioned as source-material for Jeffreys’ newly published academic book Gender Hurts [7] – took a turn at disparaging the vaginas of trans women. “Some of Bower’s clients have…’complications’ from the procedure which turns penile material into a fuck-hole [of] chronic UTIs and odor/infections.” [8] Shanko wasn’t alone in her mockery of the bodies of trans women. Commenting on one of Shanko’s posts, a reader replied, “Because surgical fuckholes are not vaginas… stale urine, lint, sweat, and body fluids can just get in there and fester. It’s totally nasty that anyone in their right mind would do that to their healthy body.”[9]

Jeffreys had a great deal more to say about the uncleanliness of trans women’s vaginas. “The medical evidence is that a bad smell exists and is associated with fecal bacteria common to those male-bodied transgenders who engage in ‘heterosexual’ coitus.” Jeffreys continues, “The neovaginas lack the lactobacilli connected with vaginal health in females.”

While when actual researchers compared the vaginas of trans women to cis women, they concluded that a trans woman’s vagina bacteria is similar to the vagina bacteria of premenstrual cis females, [10] TERFs seem happy to take up a patriarchal practice Dworkin explicitly despised and rejected. To have a woman’s vagina assessed – or, as Dworkin said, “noted, remarked on, explicated, analyzed” – to authenticate her credibility, legitimacy and validity is to deploy the very patriarchy TERFs ironically assert they fight in their decades-old war on trans people.