Some of you may be shocked to learn that staff at Heritage Middle School in St. Leonard, MD are forcing school children to crossdress in order to make them understand the hardship trans and gay people are facing. It must be true because here’s a photo of the school children: 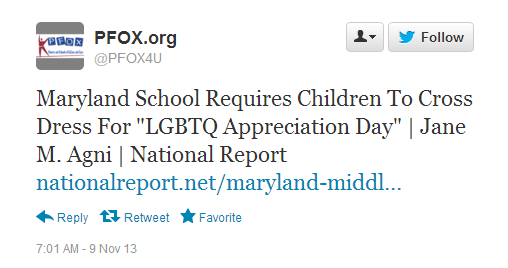 Who’s PFOX you ask? Well, PFOX is an ex-gay/ex-trans group and since this story fit their pre-existing narrative, I guess they felt they should pass it on without conducting any fact checking. The same thing happened with a group that tried to stop a trans-inclusive non-discrimination ordinance from taking effect in San Antonio, Texas: 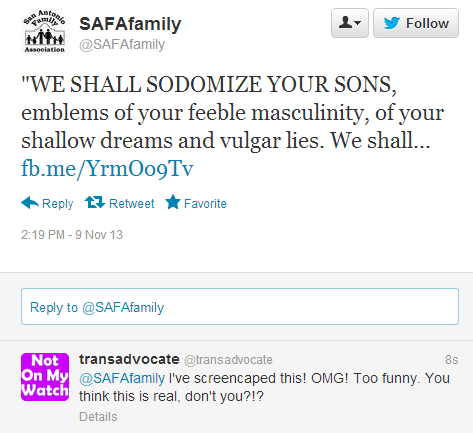 The story even made it to conservative AM radio: 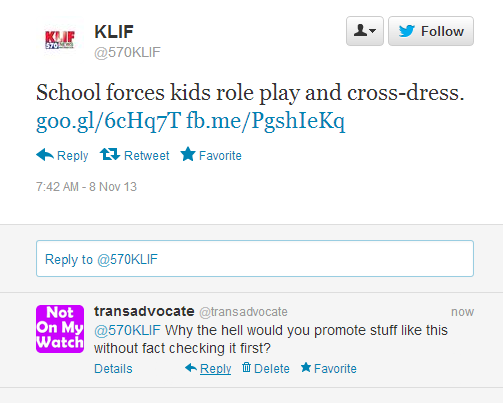 In fact, the story is a HOAX.

There is no Heritage Middle School and the story went viral after it was posted on the fake news site, the National Report on November 7th. The photo featured in this article is from what appears to be a powder puff event in a school gym. The photo was taken Thursday, December 1, 2005 around 2:30 in the afternoon: 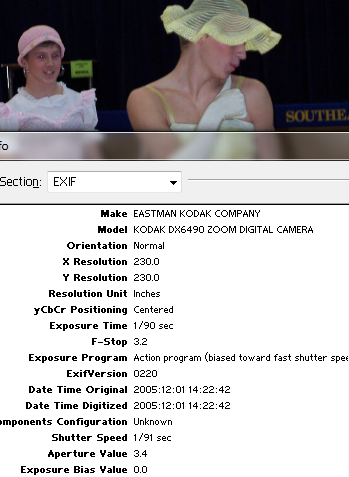 Numerous right-winger sites, blogs, and armchair pundits bemoaned the sad state of American public schools as they blamed the Obama-socialist-communist-Hitler-Nazi system that is sure the be the downfall of us all.

The willingness to unquestioningly believe practically anything – no matter how ridiculous – if it seems somehow trans is remarkable:

Tammy Prescott, a mother of one of the male students who was allegedly required to dress as a female and act submissively to the boy he had been partnered with claims Mrs. Shandel told her child that he would be a “CD (cross dressing) bottom, which is apparently a respected subculture amongst homosexual population. – National Report

When it comes to anything to do with schools and queer (especially trans) students, the credulity of certain circles seems to know no bounds. While it’s fun to snicker at these buffoons for being suckered, it’s a symptom of a very real and very dangerous problem.

Recently, the Pacific Justice Institute (PJI), an ex-gay/ex-trans group, issued a press release which claimed that a trans kid (who I refer to as Jane Doe) was harassing cisgender girls in the restroom. The news immediately spread throughout right-wing circles and shortly thereafter, became international news. The hate generated by the coverage lead numerous individuals to call for the mutilation and death of this trans girl:

O’Reilly: All right, the second one is in Colorado, and we predicted this would happen here and of course the left wing press went wild, but more and more school districts are saying that if you are a transgender person – that’s all subjective, you don’t have to prove that – you can go and use any bathroom that you want, any locker room you want.

As it turned out, the claim was a hoax. Fox News failed to do what I did: simply call the school and do some fact checking. Instead, Fox only spoke with PJI.

Though the harassment never happened, the hate inspired by a willfully obtuse press hit its mark and the trans kid became so suicidal, immediate professional intervention had to be obtained and the Jane was put on a suicide watch.

After the harassment hoax was exposed, PJI changed its story and claimed to the press that the Jane’s mere existence was intimidating and harassing to cisgender kids and again, the press reported it without fact checking the claim. As it turned out, the Jane is well-liked at the school and the town is resentful that this group is targeting one of their own.

The TransAdvocate worked tirelessly to fact check the seemingly never-ending stream of falsehoods flooding from PJI. Even so, folks seem eager to hear and believe that trans children are bad. Nobody questioned PJI when they asserted that the town police were investigating Jane Doe for criminal behavior. That also turned out to be false.* In fact, I interviewed the anti-queer group and debunked numerous talking points that they continue to successfully use – without challenge – in the press. For example, the AP unquestioningly dedicated 1/4 of its piece to PJI talking points, failing to note that PJI is an ex-gay organization or that PJI’s claims of harassment were proven false. This, days after GLAAD posted an alert to the media warning them to not be duped by PJI’s talking points. Even when a cursory google search would turn up numerous sources contradicting PJI’s talking points, the AP ran PJI’s rhetoric without challenge and it became syndicated throughout the nation. The same willingness to unquestioningly believe the worst about trans people showed up on an ABC news report and that bias is currently being used to overturn protections for trans children in California.

*Some right-wing news sources are now trying to cover for PJI’s lie by saying that the sequence of events are as follows:

That’s the lie being pushed by LifeSiteNews – a right wing news blog. Here’s what actually happened: