Sasha Fleischman, a genderqueer senior at Colorado’s Maybeck High School, fell asleep in the rear of a bus heading for East Oakland. Sasha’s skirt was set on fire by a 16 year old named Richard Thomas, resulting in 3rd-degree burns. Sasha was hospitalized and must have skin grafts. Sasha will remain hospitalized for several weeks, but should be home for Thanksgiving. “Sasha is getting good care, and has a good prognosis for recovery,” Trevor Cralle, admissions director at Sasha’s school wrote in an email to students.

Maybeck High School staff and students are stand in solidarity with Sasha:

While most news reports have been supportive, they’ve ignored  Sasha’s prefered pronouns, they/them and are instead misgendering them.  On November 6, Laurie Kahn, operations manager for Sasha’s school informed the press that Sasha prefered the gender-neutral pronouns they/them. He went on to clarify, “Sasha worked out the gender issues on their own and we try to respect the wish to be referred to as ‘they.’” 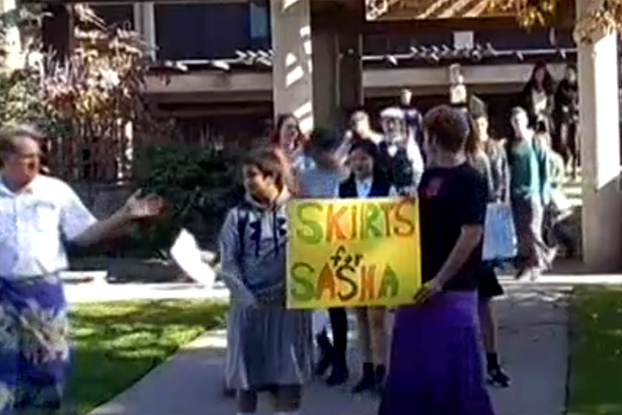 Confusion about pronoun use occurred when Sasha’s mom, in a moment of stress, fear and worry used the pronoun “he” when initially talking with the Oakland Tribune the same day Sasha was attacked. Around the same time, Sasha’s cousin used male pronouns in an online fundraiser. Since then, practically all press has disregarded Sasha’s wishes and are instead referring to them as a boy/man using pronouns he/him:

To be clear, Sasha said that they prefer gender neutral pronouns:

Hello, I am Sasha Fleischman. I am interested in linguistics, conlanging, and politics. I’m also genderqueer. My preferred pronouns are the singular they (they/them/their/theirs). – Google+

Sasha’s family is attempting to set the record straight, even when they are struggling with Sasha’s pronouns:

Sasha is agendered, he, which means that he, his preferred pronouns are they, them, their. They do not identify with either male or female. They don’t want people to make assumptions based on ‘he’s male’ or what he’s wearing. It’s like, he want’s there to be a blur. – Debbie Fleischman, November 9

Sasha Fleischman’s attacker is to be charged as an adult. It is reported that he said that he set Sasha on fire because he is homophobic and is now facing a hate crime charge.

Before PJI: Jane Doe (front row, middle) with school friends. The Pacific Justice Institute (PJI) is the ex-gay organization who claimed that a trans kid (who I refer to as Jane Doe) in Colorado was harassing cisgender girls in the restrooms. Media outlets…
Read
Previous Post

Right-wing gets it wrong. Again.

Some of you may be shocked to learn that staff at Heritage Middle School in St. Leonard, MD are forcing school children to crossdress in order to make them understand the hardship trans and gay people are facing. It must be true…
Read
Random Post

The Pacific Justice Institute (PJI) is the ex-gay organization that stirred up the right-wing word by claiming that a trans kid (who I will refer to as Jane Doe, for reasons of safety) in Colorado was harassing cisgender girls in the restrooms. Right wing media…
Read
Random Post

This update is from a peer LGBT community activist who wants to remain anonymous. The update is accurate as of the December 4th update found on the California Secretary of State's page on the AB1266 referendum update page. • Counties…
Read