Like Steph Mineart, I recieved a letter from Indiana Equality (IE) asking for money. The following paragraph steamed my ass:

“In September of this year, State Senator Pat Miller proposed a bill that would have criminalized artificial insemination for unmarried women in Indiana. The purpose of this proposal was to deny all members of the LGBT community the fundamental right to have children. By taking swift action and working in conjunction with civil rights, child protection, and family rights organizations, Indiana Equality forced Senator Miller to withdraw her bill from consideration.“

WHAT SWIFT ACTION? I wouldn’t call a press release, “swift action.” Should I send IE cash because they put out spiffy press releases? What “work” was done with other organizations? I seem to remember a group of people 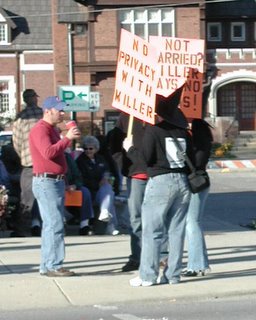 that did take swift action, but they were from Rock Indiana Campaign for Equality.

You want my cash? Give me a reason to give… and stop taking credit where you deserve none.

(thanks to Steph for the heads up!)

Republicans - Do As I Say, Not As I Do

It looks like Prop. 622, The Human Rights Ordinance, has a chance at passage next week. Republican Lynn McWhirter said: "(Party leaders) see it's moving forward, so they said everyone should vote their conscience this time." Is it just me,…
Read
Previous Post

Before You Vote No…

I wrote the following e-mail to my (Indianapolis) city-county council member concerning the Human Rights Ordinance (Prop. 622). A Transgender Lives In Beech Grove! My name is Marti Abernathey. I am writing you concerning Prop. 622. I live in Willow…
Read
Random Post

By Diana O’Brien 16 Jan 2013 The third season premiere of Lost Girl just demonstrated the well-worn path for advancing gay/lesbian/bisexual themes in the media. That path continues to be walking over the crushed public image of transgender people. Lost…
Read
Random Post

As many readers may be aware, the American Family Association (sponsor of conservative Christian news site OneNewsNow) has organized a boycott of McDonald's. (At various times during the past decade AFA has also boycotted Ford, Target, and Disney.) According to…
Read
Random Post

I found a pretty intriguing comment over at Womens Spaces/The Margins concerning a post written by Harry Benjamin Syndrome apologist, Cathy Platine, at Pam's House Blend. That whole thread over at PHB consists of males scratching out turf over the…
Read