On 19 January 2018, Russian authorities approved a controversial Decree, defining the procedure of legal gender recognition (LGR). The possibility to change one’s gender marker existed in Russian legislation since 1997. Federal law N143 “On the acts of civil status” (article 70) required “a document of the established form about the change of sex issued by a medical organization” to be submitted for the Registry to change the person’s civil status. However, the authorities failed to specify the “established form” of the document for 20 years. The Decree introduced by the Ministry of Health in October 2017 was intended to fill this legal gap. 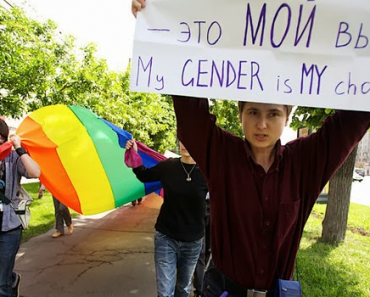 It should be noted that despite the lack of the “established form”, Russia had an established legal practice of changing gender marker for trans people, although this practice varied from region to region, with some Registry offices and courts requiring surgery, hormone therapy and psychiatric diagnosis “transsexualism” (code F64.0 in International Classification of Diseases, 10th revision (ICD-10)), while others were satisfied if just one or two of those requirements were met. This lack of coherence, blamed by some trans people, was prized by others to whom it afforded more flexibility. For example, if a person lived in a place where the local Registry was known to require surgery for LGR and that person did not wish to undergo surgery, they could try to have their gender marker changed in a different region. Also, there were no specific rules defining the work of psychiatric commissions issuing the diagnosis “transsexualism,” and there were at least two “trans-friendly” commissions where the diagnosis could be obtained in a relatively short period

The Ministry of Health introduced the draft of the Decree stipulating the “established form” and specifying the rules of issuance of the corresponding document on 5 October 2017. The translation into English of the draft can be found at the website of Transgender Europe (TGEU). The main points of the proposed procedure were the following:

This proposal was drafted by medical bureaucrats in the Ministry of Health without any input from the trans community, and as we learned later, even without consulting many of the doctors working in the field of trans health (although I doubt that the result would be better if they did). It is impossible to say why this Decree appeared at this particular moment. Some activists have been advocating for it for years, to no avail. One of the individuals I spoke to said it was likely related to the efforts to “close the gaps” by the bureaucracy before Presidential Elections in March 2018. Another person (who is a doctor) claims that it might be somehow related to the proposed changes in the coming ICD-11 and the attempts of conservative medical professionals to maintain the status quo. I conducted a small investigation and found out the name of one of the doctors behind the Decree. Although I was able to contact this doctor, his response was not very informative. He claimed, for example, that the term “sexual reorientation” was the “invention of medical bureaucrats,” that he apparently did not support, and that was almost all useful information I managed to obtain. The bottom line is we know almost nothing about who drafted the Decree and what were the real reasons behind it.

Trans activists heard about the draft next day after its publication from news reports. In Russia, as in some other countries, new pieces of legislation/rules are subject to public consultations, which theoretically are meant to ensure that the opinion of citizens is taken into account (a kind of direct democracy). However, in practice, this procedure is a mere formality. So we had just 14 days to organize ourselves and submit our opinions and proposals. A word must be said here about the coverage of this draft in the media, who portrayed it as a “progressive” step that would “finally” let trans people change their gender marker (although it had been possible long before). Among the media outlets that covered the news, only BBC Russian Service interviewed two trans activists, while other journalists were happy to rely on the official memorandum (an introductory note explaining why the Decree was needed), or to a lesser extent, the opinion of doctors. It says something about the quality of Russian media (and not only Russian), but this is a different topic.

The proposed draft of the Decree received a broad range of responses from trans people and activists. Although no sociological survey was conducted, it is safe to say that the proposed Decree was generally unpopular. The long period (1.5 years) of the initial psychiatric evaluation was perhaps the most criticized part of it. The vague term “sexual reorientation” was probably the next. Some activists made a case for removing psychiatric and sexological evaluation altogether, while others insisted that some kind of evaluation was necessary. While there was no agreement among trans people on what we wanted to achieve, there were even more tensions on tactical issues. Some activists took a very cautious approach, proposing minor changes (such as reducing the length of evaluation to 6 months instead of 1.5 years), while others took a more radical stance, demanding complete overwriting of the Decree. In the end, various organizations and individuals submitted very different comments. I don’t find it practical to go into much detail here, but those of you who read in Russian can find a thorough analysis of those comments in my article.

What happened next was very characteristic of Russian bureaucracy: the Ministry of Health apparently ignored all the comments submitted during the public consultation and duly sent the Decree for reconciliation to the Ministry of Justice. At that point, we were almost sure the fight was over, and Russian trans people would be obliged to live with this awful procedure for another 10-20 years. Our last resort was international advocacy, but even that got bogged down because of disagreements among activists (although I personally submitted a complaint to the UN Special Rapporteur on Health). However, something unexpected happened next: the draft was rejected by the Ministry of Justice. It is not possible to know for sure who exactly raised objections and for what reason, as the bureaucracy in Russia is highly nontransparent.Only in January did we learn that the Decree was finally signed with the following amendments:

It is hard to say whether the activists’ involvement in the public consultation had anything to do with those amendments. The first and third amendments introducing a piece of legislation with a previously unknown and undefined term would create another legal gap.

That leaves us with the following LGR procedure in Russia:

This is how it is going to work in theory. However, it should be noted that the Decree (even after amendments) has been poorly drafted, most likely by people who had never met a trans person in their life. Thus, it leaves many blind spots that can be variously interpreted by the Registry staff and courts. Furthermore, it is not clear how this procedure is going to work

Even if the Decree is enacted in practice, as shown above, it is not clear whether it will change the lives of Russian trans people for better or worse. By stipulating mandatory psychiatric evaluation and standardizing the makeup of the commission, the Decree has ruined the hopes of those trans people who wished to have their gender marker changed without a psychiatric evaluation. Thus, this Decree is a blow in the face of the Russian trans depathologization movement and all who believe that being trans is not a psychiatric (or for that matter, sexological) condition. Visiting a psychiatrist and a sexologist not only contradicts the ideological principles of many but can result in various types of abuse on behalf of those doctors, as documented in my article. Furthermore, the Decree does not address the question of staying in a psycho-neurological dispensary, meaning that some psychiatrist may insist that trans people spend there up to 30 days to obtain the diagnosis, just as they did before. Last but not least, the Decree introduces two stages of psychiatric evaluation (initial evaluation and commission), while there was only one (commission) before.

On the other hand, the Decree might simplify legal gender recognition for those who are not outright opposed to visiting psychiatrists and sexologists. At least they will not be obliged to spend many months or even years in courtrooms, as used to happen before when no “established form” existed. The fact that surgeries and hormone treatment are not listed as requirements is certainly a step in the right direction as well.

An important blind spot that the Decree leaves unaddressed is the fate of intersex people who need to have their gender marker changed for biological reasons and thus don’t fit into the standard “transsexualism” narrative. I know at least one person in Ukraine whose physical appearance changed during her lifetime because of her intersex trait, but when she applied to the Registry to have her gender recognized, she found out that the LGR procedure in that country was not designed with intersex people in mind. It is most regrettable that intersex activists in Russia submitted their comments during the public consultation, but their concerns were left unresolved. Unfortunately, this problem is not unique to Russia.

The activists I had a chance to talk to expressed mixed feelings about the Decree. While no one expected that a progressive LGR procedure on a par with Argentina or Malta could be adopted in Russia, many were thoroughly disappointed with the outcome because their suggestions were not taken into account. But the general spirit of reactions I read was “it could be worse.” Russia’s Trans Legal Defense Project even praised the procedure as being “quick, transparent and accessible,” although such assessment appears highly controversial to me.

Even though I strongly oppose the Decree in its current form, I have to contend with the fact that it is more or less in line with the wishes of the Russian trans community at large. In my study of trans people’s policy preferences in 2015, I found that 46% of respondents wanted “diagnosis transsexualism or the like” to stay as a requirement for LGR, while 41% insisted that a person should not have psychiatric disorders (except for “transsexualism”). The proportion of respondents who chose at least one of these options was 59%. That means that the majority of trans people supported some psychiatric or psychological assessment. On the other hand, only 27% of respondents mentioned that hormone treatment should be a prerequisite for LGR, and only 20% mentioned surgery. I hardly believe that the Decree’s authors read my article, but their procedure somehow managed to meet those wishes in the broadest sense. Given the current political climate in Russia, I think this is the best procedure that could be achieved for now. It may even be called “progressive” when compared to the procedures of neighboring countries such as Kazakhstan, Ukraine (although the procedure is being revised there) and Belarus. It is even not as bad as in some European countries that still legally require sterilization and other invasive medical treatment.