I should have known that this was inevitable. The headline at Christian Post- reads, “Doctor Slams Trans Study That Claims Using Preferred Names Reduces Depression, Suicide.” I wrote about this last Saturday. Researchers at the University of Texas at Austin concluded:

… In one of the largest and most diverse studies of transgender youths to date, researchers led by a team at The University of Texas at Austin have found that when transgender youths are allowed to use their chosen name in places such as work, school and at home, their risk of depression and suicide drops.

The folks at the Christian Post are having none of it. Based strictly on the applicable science, of course:

New research published in the Journal of Adolescent Health by scholars at the University of Texas purports to show that the more transgender youth are called by their preferred name in society, it lowers their risk of suicide and depression. However, a top pediatrician denounced the research as “meaningless” and leading to “false” conclusions. 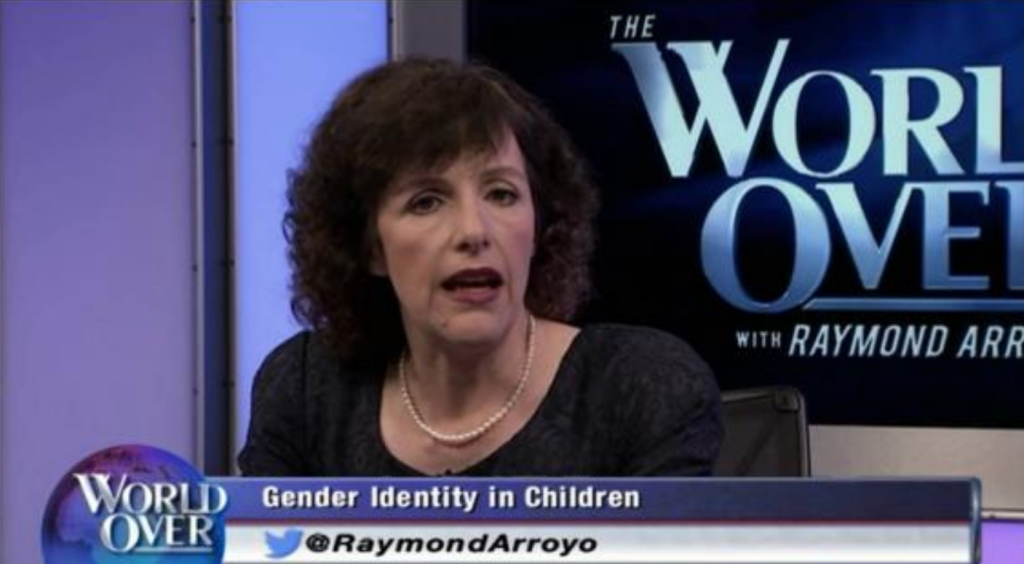 On behalf of the Catholic Church, Michelle Cretella is doing her part for disinformation regarding transgender and gender nonconforming youth

The former pediatrician they are referring to is Dr. Michelle Cretella. Who else? She is not a “top pediatrician” and never was a top pediatrician. She has never done research published in a respected peer-reviewed scholarly journal. She isn’t even currently licensed to practice medicine. Cretella is, however, president of the anti-LGBT hate group, American College of Pediatricians, a far cry from the professional peer group, the American Academy of Pediatrics. The story continues:

“Do not be fooled. This recent study, like all trans youth studies before it, is political agenda masquerading as science,” Dr. Michelle Cretella, president of the American College of Pediatricians, which publicly opposes gender transition procedures and treatments for children, told The Christian Post.

“As is customary of all trans youth research, this is a woefully small study that is not at all representative of children who self-identify as transgender nationwide. Consequently, the statistics derived from it are meaningless and the conclusions false.”

There is only one reason that Cretella is peddling that BS: The Catholic Church does not approve of transgender people. That’s it. But do let me know when Cretella publishes her study to the Journal of Adolescent Health. Until then we can all safely assume that this wretched woman is speaking out of a part of her anatomy that was never designed for communication purposes.

In category:Opinion
Tags:civil rights in the media SBF transphobia
Next Post

The anti-trans movement created a new pathology they're shopping around to various (mostly right-wing) news outlets. It's called "rapid onset gender dysphoria" and you catch it from websites like DeviantArt, Tumblr, and Reddit. A great takedown of this internet illness was…
Read
Random Post

The POTUS noted Stonewall in his 2013 inaugural address: We the people declare today that the most evident of truth that all of us are created equal -- is the star that guides us still; just as it guided our forebears…
Read
Random Post

ARE YOU A MAN OR A WOMAN?

A Line In The Sand

by Caillean McMahon Pennsylvania Gay and Lesbian Alliance This well may be the least popular editorial that I have ever written. Having said that, having warned the "gentle reader" that I am about to drop a match onto the gasoline…
Read
Random Post

If trans women aren’t welcome, neither am I

A cisgender sex-positive dyke organizer addresses the cotton ceiling .   By Andrea Zanin The question of whether or not to include trans women in women’s sexuality-based events is old and tiresome, but it still comes up with some regularity. I recently responded…
Read