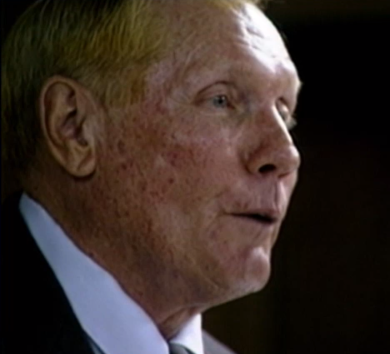 Fred Phelps, founder of the WBC will forever be remembered as one of the most hateful people ever to walk this planet.

Fred Phelps has died. According to CNN the founder of the Westboro Baptist church passed away today Thursday the 20th of March 2014 from natural causes.

While many are calling for a picket at Phelps funeral Stephanie Mott, executive director of the Kansas Transgender Project doesn’t agree telling CNN “hate doesn’t drive out hate.   Thats what Martin Luther King said. It takes love to drive out hate.”

Writers for the TransAdvocate work hard to bring you news and commentary. If you found this article meaningful, let the author know that you appreciate the work they do with a tip!
In category:Kelli Busey
Tags:hate in the media
Next Post

Everyone, even fans, are appalled with Rupaul's 'shemale' contest

Everyone, except GLAAD that is Rupauls contestants yucking it up after being told they will be using a transphobic slur in determining whether a person is a 'real' woman or a psycho case Rupaul, the clown in pancake makeup has…
Read
Previous Post

Andi Dier. a transgender woman from New York was roughed up by the employees of The Irish Times Pub and Restaurant in Holbrooke as they bruskly removed her from the premise. Ms. Dier says they used transphobic slurs and tried to take…
Read
Random Post

But It IS Okay For Trans People NOT To Have The Same Rights As Gays When It Comes To Freedom From Employment Discrimination? [UPDATED]

In Hawaii... of course it is! Gay rights supporters said being homosexual is not a choice, and gay citizens deserve the same legal rights as everyone else when it comes to marriage. But trans people... and freedom from employment discrimination..............?…
Read
Random Post

Well, one of the first names we'll read for the 2012 Transgender Day of Remembrance has been determined and her death happened on all nights, Christmas Eve.I'll slam the transphobic reporting of KCTV 5 'reporters' DeAnn Smith and Nima Shaffe later.  …
Read
Random Post

By Alexx Andersen There has been a lot of misinformation about North Carolina’s House Bill 2 through various media outlets, as well as a general lack of coverage in regards to the many Queer and Trans People of Color-led (QTPOC)…
Read
Random Post

Over the last 24 hours, I’ve spent about 12 of them scanning Phyllis Frye’s 1970s trans documents. I don’t know that I can even put into words how those documents affected me. Most of us don’t know that we all owe Phyllis…
Read