In its landmark 2009 decision on responsible communication in the public interest, Canada’s highest court asserts this principle: “Freedom does not negate responsibility. It is vital that the media act responsibly in reporting facts on matters of public concern, holding themselves to the highest journalistic standards.”

If the Toronto Star does not live up to this responsibility in everything it publishes — in the newspaper, on its websites and through social media — we undermine our credibility with the public. As the Star’s then-publisher, Beland Honderich said in November 1972 on the occasion of the opening of the Star ’s new offices at One Yonge St.: “The most valuable asset a newspaper can have is its reputation for telling the truth.” – The Toronto Star’s proclaimed “principles“

On Saturday, January 4, 2014, the Toronto Star ran a column that featured the shocking – and totally unsubstantiated – claim that sex crimes were occurring in a YMCA. The Star’s published claim was that a male-bodied individual – who was allowed into the women’s changing room merely because they claimed to be trans – stripped completely nude in the locker room and with an erection, hit on elderly women. The story was written by the Star’s ethics journalist, Ken Gallinger.

The letter Gallinger printed and responded to is a hoax. Because Gallinger failed to attempt to corroborate the claim that sex crimes were not only happening at Toronto-area YMCAs, but was supported by YMCA’s policy around access to changing rooms, the hoaxer was able to have the Star not only publish the false claims targeting the YMCA, but have Gallinger defend the fake YMCA policies around changing room access. Because Gallinger failed to contact the YMCA about their changing room procedure, he had no way of knowing that one may not merely claim to be trans and have unfettered access to the women’s changing room.

I spoke with Laura Graham-Prentice, the Vice President of communications for the Toronto YMCA about what the process is for changing facility access:

It really is [on a] case-by-case [basis], because every case is so dramatically different. So, it is a discussion [the person will have] with the manager. Typically [those] who are going through gender changes have a lot of health support, so they’re working with doctors and a team of people that are helping them through that transition. And so, it may be that we are working with their medical team as well. We wouldn’t make the determination of when the appropriate time [for ] what the process is for that person to think about making those changes. In the beginning [they have a] larger support network [who’s helping them have] that conversation…

We do have changing rooms that offer privacy. So, we have members with a multitude of barriers or issues and so, we do have a very strong member etiquette that’s on the back of every membership card around respect and treating other members appropriately. But we have a lot of supports that we can offer people around privacy. So, there are private changing rooms. There are ways that people can easily transition without making other members uncomfortable or themselves uncomfortable.

Let’s contrast the above reality with the process laid out in the anonymous email published by the Toronto Star :

Recently, a “man” claiming to be transgender, who had not yet begun physical treatments, was permitted by our local Y to use the women’s locker room. There are no secure change rooms.

According to the anonymous internet persona, the YMCA has no secure changing rooms. Moreover, the anonymous email claimed that people who’ve not begun transition can hang out in the women’s changing area by just claiming to be trans. Both of those claims are false.

Just to be clear, I asked if Graham-Prentice had heard of this situation prior to it being published in the Toronto Star.

You can hear my conversation with Graham-Prentice in this TransAdvocate podcast:

Despite publishing unverified claims against the YMCA, that Gallinger’s story was cleared by the Star’s editorial staff is nothing short of a breathtaking abdication of their proclaimed guiding principles.

The Toronto NOW published a piece about Gallinger’s story. NOW said that Gallinger submitted a response to the TransAdvocate for publication in the Toronto Star, but refused to comment on it:

He tells me in an email that he’s submitted a follow-up piece “addressing many of the same questions you’re interested in,” but declines to be interviewed until it’s published.

Kathy English, the Star’s public editor (who investigates errors and other lapses of standards), says she is aware of the TransAdvocate post and is looking into it. As for the broader issue concerning the duties of advice columnists, she agrees that there are “interesting questions to be sure.” – Toronto NOW

I asked Graham-Prentice about the NOW article and she indicated that the YMCA had some interaction with Gallinger since his story was published and was aware that Gallinger had prepared a piece for publication. Graham-Prentice said that Gallinger’s new piece would address the debunking done by the TransAdvocate by claiming that the published anonymous email could have come from anywhere in Canada; that when the email sent to the Toronto newspaper spoke of a “local Y,” the YMCA might be located somewhere other than the Toronto area.

This is surprising since Gallinger claimed to have verified whether the email he had received was valid. Gallinger wrote, “However, because of the sensitivity of this subject, I did take the step of at least substantiating that the e-mail address from which it came was valid; it was.” Apparently Gallinger’s substantiation process didn’t include checking the email header for origin information.

At this point, I want to introduce a debate tactic well-known to the Internet, but perhaps not so well known to print media: Strawman Sockpuppetry. That’s when one inserts an inept voice into a debate to argue against one’s own position. This false flag tactic creates the illusion that the debate position held by one’s opponent is ridiculous.

After Gallinger’s problematic story was printed, those who stand against trans equality came out of the woodwork to publicly gnash their teeth at the supposed absurdity of trans equality… With the help of the Star’s own editorial staff. After the Star was notified that Gallinger’s story was predicated upon a hoax, the Star nevertheless published a letter to the editor decrying the absurdity of trans equality as evidenced by Gallinger’s story. The Star editorial staff made no mention that the entire story was fake. Instead, they printed a letter titled “Trans rights trump women’s rights” using the original title of Gallinger’s article: 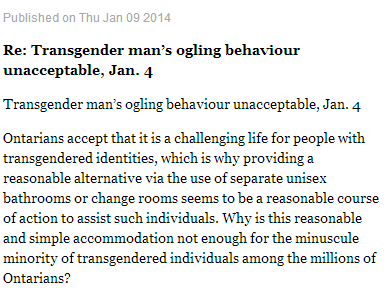 Do our rights get trumped because an individual subjectively “feels” female even though he may still have a penis, and be more than happy to show it off? Did the OHRT consult Ontarians regarding their decision?

I am concerned that sexually predatory men will take advantage of the new bill by claiming they are transsexual in order to freely access any women’s washroom in the province. The guaranteed consequences of this bill are that many girls and women will definitely be victimized as a result.

Mr. Gallinger’s article suggests that this is already happening — hardly a surprise — and the trend will likely increase because there are no legal consequences for any predatory individuals who behave in this way. A predator banned from one facility simply has to go down the road to another.

Mr. Gallinger bemoans the predatory behaviour that one poor woman was forced to endure, while actively supporting a system that allows such predatory behaviour to flourish. Far more women than trans people stand to feel invaded and helpless by such behaviour as there are likely far more sexually predatory individuals out there than transgendered people — predatory individuals who will be delighted to put on a dress (or not even that) in order to access women’s bathrooms and change rooms under the guise of being self-identified as “transgendered.”

Again, this letter was published without any mention that the entire issue is a hoax. The Toronto Star has an editorial problem.

Forget that this incident is a hoax, those who stand against trans equality need not be burdened with having to produce an actual incident to point to and decry. While Gallinger may have had the very best of intentions, it seems that he was duped by anti-trans activists who regularly seek to get unwitting journalists to publish their hoaxes. I personally believe that Gallinger probably felt that he was addressing a serious issue in a serious way. While Gallinger may have been the unwitting accomplice in the hoax, the hoax could not have been perpetrated without Gallinger and an editorial staff who’s apparently willing to publish the anonymous and unsubstantiated claim that sex crimes are taking place at the YMCA if the story features a trans person.

The Toronto Star has published this claim – without noting that the claim is a hoax, or at the very least is an anonymous and unverified claim – twice now. Twice the editorial staff saw fit to proffer – as plausible – the highly questionable, anonymous, unsubstantiated and contested claim that sex crimes are taking place at the YMCA. In what other context would such editorial behavior be tolerated? In what way does this behavior resemble the professional standard the Star publicly professes?

NOTE: I had misattributed NOW (the feminist organization) for NOW (the alternative media organization). HT to Savannah! You rock!