Did bias lead to prosecution of bullied Hercules trans student? 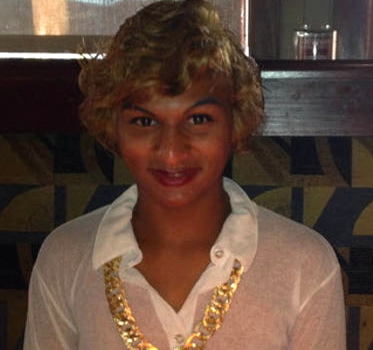 On December 4, 2013 an investigative reporter, Jennifer Lopez interviewed the police department about a case against a trans Hercules High School student who had fought back against school bullies:

I then went on to ask Detective Putten about why there’s not a hate crime being put on individuals [who attacked Gutierrez] and she stated to me that because [Gutierrez] is listed as a male, she did not identify [Gutierrez] as a transgender person and therefore [Gutierrez] would not be able to fall under hate crime [protections].

[Detective Putten] said that she would recommend that charges be brought against [Gutierrez] and the other students and the charges would be battery.

Not only do we have a person that went to authorities and said, ‘Hey, look. I’m being bullied day after day after day and nothing is being done.’ Now this transgender person gets attacked and now the system labels her a man and says that there is no hate crime whatsoever involved here. There’s no protections for this person. Not only is there no protections, we’re going to go over her head as revictimize this person by arresting this person and telling this person that she did something wrong in complaining and protecting and defending herself against three other students that attacked her.

After numerous attempts I was able to briefly speak with officer Putten. I asked her if she knew that Gutierrez was trans and Putten replied, “Well, that’s what the press is saying. Under a new state law – apparently – that’s the, uh, title he, uh, she goes by at this point. At the time the school district had him listed as male. A male student. The ‘transgendered’ stuff is coming from the press, not the police department.” I asked Putten to talk about the “state law” she referenced, “The new transgendered law is going to give the person the ability – if they claim to be a transgender – to choose sport teams that they want to be on, which restrooms they want to use, showering facilities, so on and so forth. ”

I called Dan Cabral and reviewed the possible bias the police department had exhibited. “This is new information. I’ve not heard of this before. We get thousands of police reports and we have to hope that the report the department turns in is a factual and complete police report.” I spent around 15 minutes talking with Cabrel about the behavior of the police department and he informed me that he would investigate further and consider what this means for the Gutierrez case. “Bullying is reprehensible. My goal is to respond to this case based on the facts of this case. I will look into this situation.”

Kaylie Simon, the trans student’s public defender, told a local news affiliate that Gutierrez had been assaulted by one of the three girls who were later caught on tape attacking Gutierrez as a pack. “Jewelyes identifies as transgender, and I think that she had been tormented and harassed at school because of how she identifies.” Simon described the way these individuals would spit objects in Gutierrez’s face and the way Gutierrez had gone to her school for help just days prior to the school fight.

After giving testimony to the school board, Gutierrez spoke of the bullying she had endured saying, “It came to a point where I wanted to physically hurt myself.”  Gutierrez’s sister created a petition asking that charges be dropped. “Jewlyes should not be charged criminally. Rather, this altercation should be the responsibility of the school district, who should take proper action and implement the necessary resources to prevent incidents like these from happening again.” So far, the petition has more than 31,000 89,000 105,000 signatures.

After learning about the possible bias the police department had exhibited, Kaylie Simon, Gutierrez’s public defender said, “I’m glad that the District Attorney is looking into this and I hope that with this new information, in addition to everything we knew before, he will decide to do the right thing and dismiss this case.” She added, “The District Attorney has complete discretion on this. It’s totally up to him if he wants to prosecute Jewelyes.”

Charles Ramsey, the President of the School Board said, “We know that incidents happen and they should be addressed, but is this a priority that should be before the DA’s office?” Ramsey said that all four students involved were disciplined by the school and have since apologized to each other. “There is a lot of finger pointing and blame that can go around, but we believe the education code and suspensions have been the appropriate response to this incident.”

In November, I had spoken with the spokesperson for Hercules High School, Marin Trujillo about this incident. Trujillo discussed the way the school had planned on handling the situation. “We believe that the strategy to mitigate bullying issues is not just by suspending students, but we understand that the victim and perpetrator both have a root of pain engaged with this and we use the Restorative Justice model. It not only speaks to confronting the perpetrator with the impact of their behavior, but also tries to get to the bottom of why they did this and how the community can help them move on.”  He added, “We hope that this will be a teachable moment.”

1/15/2014: Dan Cabral is now considering Marin Trujillo’s original recommendation for Restorative Justice but has not said if charges will be dropped. Thus far, more than 150,000 people have signed a petition asking that Cabral not press charges.

[/column]
In categories:Best of TA Cristan Williams
Tags:Fact-Checking in the media
Next Post

Ex-gay groups are pounding their high chairs insisting that AB 1266 is not in effect. They claim that merely because they turned in signatures - valid or no - AB 1266, the California law codifying protections for trans children in…
Read
Previous Post

By Cristan Williams @cristanwilliams In its landmark 2009 decision on responsible communication in the public interest, Canada’s highest court asserts this principle: “Freedom does not negate responsibility. It is vital that the media act responsibly in reporting facts on matters…
Read
Random Post

Editor's note: The following guest post is from Kelly Osbourne. Osbourne is a television personality and musician. Osbourne and I discussed on Twitter about her use of the phrase "chick with a dick" and "tranny" in a public interview. With…
Read
Random Post

We are approaching the 35th anniversary of a momentous court decision.  In honor of that anniversary, I thought I'd post for your reading pleasure and intellectual nourishment: M.T., PLAINTIFF-RESPONDENT, v. J.T., DEFENDANT-APPELLANT Superior Court of New Jersey, Appellate Division 355…
Read
Random Post

Yesterday The Smithsonian's National Museum of American History added hundreds of photographs, papers and historical objects to its collection to document the history of trans, bisexual, gay and lesbian people.   And in case you're wondering about it, yes, the trans…
Read
Random Post

Having read The Philadelphia Gay News (PGN) article by Victoria A. Brownworth titled "Victims of the night: Stories of trans sex workers"  I was very impressed by the authors personal investment in her neighbors well being. Her writing indicates a deep compassion…
Read