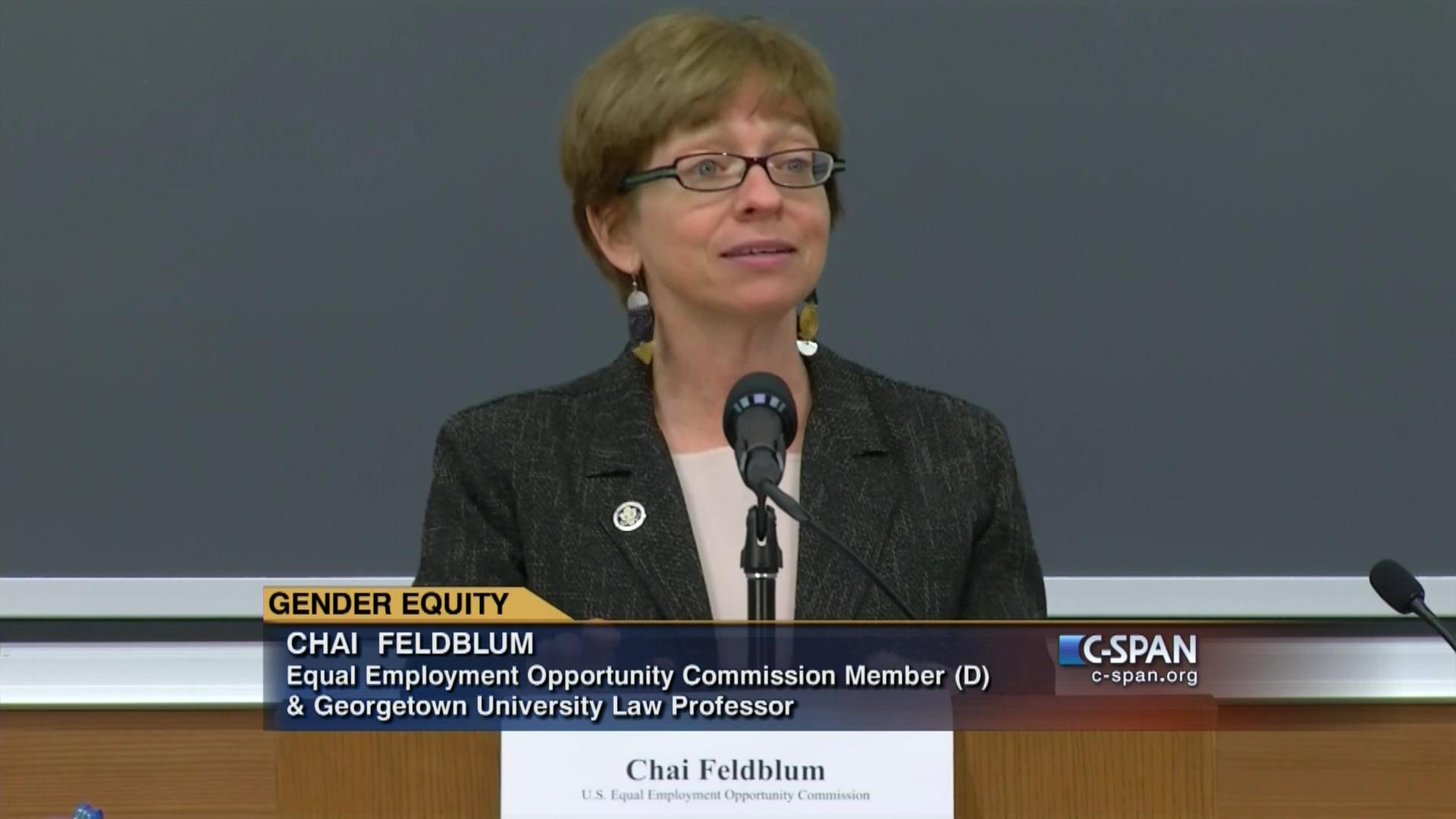 The TransAdvocate, in its trans community advocating and activism role, wanted a follow-up with added specific detail. So in a written interview with EEOC Commissioner Feldblum, I asked her to elaborate in detail on her comment, as well as where to find out information on how to file a claim, as well as where to file it.

This is the full interview. The links in the answers were all provided in the written responses, and not added by anyone at The TransAdvocate.

Autumn Sandeen: In the Mia Macy decision that was published in April of 2012, the U.S. Equal Employment Opportunity Commission (EEOC) — in a 5-0 vote — determined that job bias against employees on the basis of gender identity amounted to sex discrimination under Title VII. And on EEOC’s webpage Fact Sheet: Recent EEOC Litigation Regarding Title VII & LGBT-Related Discrimination, the case of EEOC v. Deluxe Financial Services Corp. is listed. It states in the description of the case and settlement that after the transgender plaintiff began to present at work as a woman, she was denied “use the women’s restroom in violation of Title VII.” This interpretation of which restroom a transgender employee is entitled to use based on their gender identity is in direct opposition to North Carolina’s recently enacted HB 2 — that became effective April 1st. Is EEOC prepared to take the claims of transgender workers saying their rights under Title VII are being denied?

Commissioner Feldblum: EEOC already accepts and investigates claims of employment discrimination based on gender identity and sexual orientation and will continue to do so. As a legal matter, EEOC interprets Title VII’s prohibition against sex discrimination to include a prohibition against discrimination on the basis of sexual orientation and gender identity. These federal protections apply regardless of any state or local law. With respect to transgender individuals, this means, among other things, that employees may not be:

EEOC stands ready to continue accepting these claims of discrimination, including from transgender individuals in North Carolina.

Commissioner Feldblum: Transgender employees who believe they have been discriminated against by their employer may file a charge of employment discrimination at an EEOC office closest to where they live, or at any one of the EEOC’s 53 field offices. They also may begin this process by calling us at 1-800-669-4000, or completing an on-line assessment to send to one of our offices. The charge will ordinarily be investigated at an EEOC office closest to where the discrimination occurred.

Individuals who file a charge at an EEOC office are referred to as “charging parties.” A charging party receives a copy of the charge which is assigned a charge number. Charging parties are able to track their charges of discrimination through a confidential electronic system maintained by EEOC.

If there is no settlement during the investigation, and EEOC determines based on the investigation that there is reason to believe that discrimination has occurred, the Commission issues a “Letter of Determination” to the charging party and the employer setting forth its determination. This then moves the process to what is called “conciliation.” This is a more formal effort to achieve a voluntary settlement with the employer to stop the discrimination and get relief for the charging party (and often for other parties who have been discriminated against in a similar manner.)

If a voluntary settlement is not reached on terms acceptable to the Commission, the charge is referred to our lawyers who will decide whether the Commission should file a lawsuit. Given the Commission’s resources, we file a small number of lawsuits each year. For that reason, the Commission is committed to trying to achieve settlements prior to going to court. If the Commission decides not to file a lawsuit, the charging party is given a document (called the Notice-of-Right-to-Sue) that enables the individual to file his or her own lawsuit in court.

If, on the other hand, EEOC cannot determine, after an investigation, that that there is reason to believe that discrimination has occurred, EEOC issues a Letter of Determination stating that result. At that point, the charging party also receives the document (the Notice-of-Right-to-Sue) that allows the individual to file a lawsuit. This decision does not mean that discrimination has not occurred. It just means that EEOC has not been able to find sufficient facts during the investigation to come to that conclusion.

Autumn Sandeen: I can imagine a situation where dozens, perhaps even hundreds, of claims are filed by transgender employees against almost as many employers. Because we have a new situation — a state law that is contrary to what Title VII requires — does EEOC have any tools in the toolbox to address the root issue of this conflict?

Commissioner Feldblum: It has been the position of EEOC, since April 2012, that gender identity discrimination is prohibited by Title VII, as explained in our decision in Mia Macy v. DOJ referenced in [the first question]. Since the issuance of the Macy decision, the Commission has published decisions holding that an employer’s restrictions on a transgender woman’s ability to use a common female restroom facility violates the prohibition against sex discrimination, Lusardi v. Dep’t of the Army, EEOC Appeal No. 0120133395, 2015 WL 1607756 (Mar. 27, 2015), that the intentional misuse of a transgender employee’s new name and pronoun to embarrass or humiliate the employee may constitute sex-based discrimination and/or harassment, Jameson v. U.S. Postal Service, EEOC Appeal No. 0120130992, 2013 WL 2368729 (May 21, 2013), and that an employer’s failure to revise its records pursuant to changes in gender identity stated a valid Title VII sex discrimination claim, Complainant v. Dep’t of Veterans Affairs, EEOC Appeal No. 0120133123, 2014 WL 1653484 (Apr. 16, 2014).

While these cases involved federal employees, the Commission’s position that gender identity is protected under Title VII is equally applicable to applicants and employees who believe they have been discriminated against by private sector employers or state and local governments. The Commission has filed lawsuits to address a number of forms of employment discrimination related to LGBT status.

Using the resources we have, EEOC staff has done significant outreach across the country to let people know about the reality of discrimination against transgender people and LGB people and the legal protection the EEOC will use to protect LGBT people who experience discrimination. I would have hoped that the Commission’s reasoned decisions and our outreach might have had an impact on the state and local levels in terms of addressing the root causes of lack of knowledge and misperceptions. However, law and outreach can only do so much. Community work on the local level to educate people is essential for changing the hearts and minds of ordinary people across our country.

Autumn Sandeen: Well, for the nuts and bolts, if a transgender employee in North Carolina wants to file a claim with EEOC, where can that employee go to get information on how to file a claim? Is there a website with a form (or forms)? A phone number one can call if one needs assistance?

Commissioner FeldblumFurther information about how to file a charge with EEOC can be found on our website. You can call 1-800-669-4000 to submit basic information about a possible charge, and the applicant or employee’s information will be forwarded to an EEOC field office in your area.

With respect to North Carolina, the Commission has a District Office in Charlotte, as well as offices in Raleigh and Greensboro. Addresses and times for these offices to accept charges may be found at http://www.eeoc.gov/field/index.cfm.

Please know that EEOC stands ready to help any transgender applicant or employee, as well as any lesbian, gay or bisexual applicant or employee, who has experienced employment discrimination, regardless of where they live within the United States of America. This is the case regardless of whether the state or territory in which they work does not yet have an explicit law protecting LGBT people or if that state has passed a law affirmatively requiring discrimination against LGBT people or providing broad exemptions from existing state laws.

Beyond the scope of the interview, the EEOC has a website What You Should Know About EEOC and the Enforcement Protections for LGBT Workers. It has a great deal of useful information, including The EEOC’s outreach and training efforts with respect to developments in LGBT-related employment discrimination protection.