“All transsexuals rape women’s bodies by reducing the real female form to an artifact, appropriating this body for themselves.”

All transsexuals rape women’s bodies? Last I checked rape was non-consensual,  forced sexual intercourse.  Raymond’s use of it as something less than that should be considered an insult to the victims of rape everywhere. 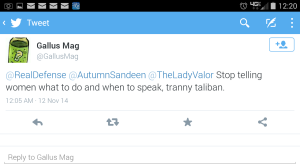 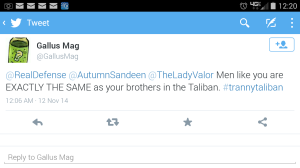 on Veteran’s Day the person on the left:

is a terrorist. Autumn Sandeen, the trans person who went to jail so gays and lesbians could serve in the military openly, is a terrorist? The irony is that TERF thought leaders will claim that words like cisgender and acronyms like TERF are slurs. But they have no issue bending the words “rape” and “terrorist” to the point they make no sense in context, without changing (and lessening) the meaning of the words themselves.