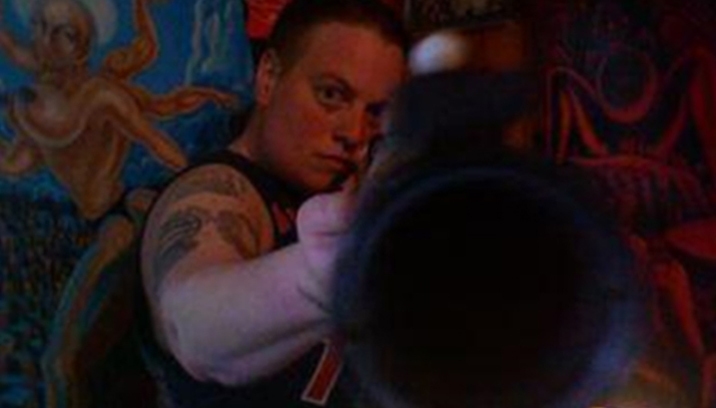 GallusMag of GenderTrender has, on Sunday, October 19, 2014, been identified as Linda V. Shanko.

Shanko is perhaps best known for mixing false, malicious statements (often sexual in nature) in with her doxxing of trans women on her blog, GenderTrender, and The TransAdvocate won’t participate in helping GallusMag hide her identity. Shanko’s actions towards many — both trans and cis — may meet the legal criteria for harassment. In fact, Shanko’s actions have been so extreme that even other TERFs have taken legal action to make Shanko stop her abuse in the past. Until now, only other TERFs who’ve been privy to the name behind her pen name have had this sort of privilege.

On October 12th, 2014, someone with knowledge of Shanko’s identity as GallusMag/GenderTrender doxxed her on an anonymous cut-and-paste website. The anonymous poster provided a lot of dot-connecting information that outed Linda Shanko as GallusMag. We at The Transadvocate have made the decision not to link to that webpage because it discloses information about Shanko’s family. We’ve seen the damage done to trans women when TERFs/GCFs have forwarded private information and images to the family members of trans women, and we won’t participate in the same kind of abuse Shanko and other TERFs are known for.

Additionally, an email was sent from a TERF (trans-exclusionary radical feminist) who provided specific identifying information about Shanko. The email contained a private conversation between the TERF and Shanko which corroborates information from the anonymous doxxing.

On October 19th, 2014, before releasing Shanko’s name, The Transadvocate‘s Cristan Williams posted on her twitter account that GallusMag’s identity had been made known to some trans activists. Prior to identifying information about GallusMag’s uncovered identity was released by Williams, Shanko took to her blog to preemptively assert that the unreleased identity was incorrect. How Shanko expected people to believe that she knew the unreleased information was incorrect is not entirely clear; nevertheless, Shanko hasn’t backed down from claiming to know the information was incorrect prior to its release.

Since GallusMag was publicly and definitively linked to Linda Shanko, trans community members began using Shanko’s name to accomplish further dot connecting. One of the first and perhaps the most disturbing discovery was of Shanko’s old MySpace Page (backup copy).

In New York City, there is a story told about Gallus Mag, the bouncer at the ‘Hole in the Wall‘, a bar and brothel on Water Street on the East River waterfront in the mid-1800s. Standing well over 6′ tall, she was said to be known for biting off obstreperous sailor’s ears, which she kept in a pickle jar behind the bar.

In an excerpt from Michael Batterberry’s On the Town in New York: The Landmark History of Eating, Drinking, and Entertainments from the American Revolution to the Food Revolution, Gallus Mag and the Hole-in-the-Wall (the saloon in which she was the bouncer) were described this way:

Walter Street’s most popular night spot was definitely the Hole-in-the-Wall, at the corner of Dover Street, run by One-Armed Charley Monell with the assistance of two ladies, Gallus Mag and Kate Flannery. Gallus Mag was a six-foot-tall English woman who kept her skirt up with “galluses,” or men’s suspenders. For use in her role as bouncer she kept a pistol in her wristband and a bludgeon strapped to her wrist. She knew how to use both. Like so many thugs of the period, she had her own entertaining “turn.” When she had clobbered an undesirable customer, she would drag him to the door by his ear, which she clutched between her teeth. If he gave any trouble, she summarily bit it off, and placed it in a jar of alcohol which she kept behind the bar for that very purpose. She was generally regarded by the police as the most savage living female.

The GallusMag of GenderTrender pays homage to the violence of the historic Gallus Mag by using an icon of an ear in a jar, an illustration by Susan Synarski for the book Booty: Girl Pirates on the High Seas, for her twitter account.

Shanko uses a different image for her comments in her blog’s comment threads: an image of the detached ear of Sadie the Goat. Quoting again from Michael Batterberry’s book:

When Sadie [The Goat] acknowledged Gallus Mag as supreme on the waterfront, Mag was so touched she returned to Sadie her ear, which she, in turn, as a gesture of sentiment, preserved in a locket hung around her neck.

Linda Shanko is a lowbrow artist. The lowbrow art movement, to quote Wikipedia, is “an underground visual art movement that arose in the Los Angeles, California, area in the late 1970s. It is a populist art movement with its cultural roots in underground commix, punk music, and hot-rod cultures of the street. It is also often known by the name pop surrealism.” She included images of her artwork in the MySpace photo pages — some signed, some not. One of those pieces of artwork she apparently created is an image entitled “Gallus Mag” (image 16 in Shanko’s MySpace photo gallery).

There is a certain fixation on evil she’s expressed as “LMV Shanko” (for Linda V. Shanko — LMV Shanko being the variant of her name she used for her MySpace and Facebook page), and one place you can find it is in a gushing comment to the author of The Lucifer Principle and Global Brain.

“My God, are you the real Howard Bloom? Of the Lucifer Principle and Global Brain?! WOW. Your books have changed my life and the way I look at the world on a daily basis. Your work is reflected in my work/art. I am grateful for your existence. Write a new book soon! Guess you don’t check your site often. Hope you get this message.” -LMV Shanko

The Lucifer Principle is described this way on Amazon.com:

The Lucifer Principle is a revolutionary work that explores the intricate relationships among genetics, human behavior, and culture to put forth the thesis that “evil” is a by-product of nature’s strategies for creation and that it is woven into our most basic biological fabric.

One can see how “evil” (often in the form of the demonic) are visible in her artwork posted to her MySpace Photo Gallery. In that photo gallery (in which the images are numbered), one can view paintings/illustrations entitled Pornicopia – 7 Levels of Hell (Image 6), Lucifera (Image 23), Breech (Image 25), Bebe (Image 3), and an untitled piece (Image 35).

Image 31 in Shanko’s MySpace photo gallery highlights a violent element to Shanko that’s in line with her taking on the pen name of GallusMag.

Shanko has a strong interest in artistically depicted nude women. One can see her public interest as posted in her GenderTrender post entitled Ways Of Seeing (episode two-female nude) (WayBack Machine archive here). In a very unexpected way for a self-identified radical feminist, Shanko uses highly sexualized — even objectifying — imagery in her paintings and illustrations of women. In her MySpace Photo Gallery, one can view her sexually fetishizing and objectifying renderings of women, to include works entitled Satan Worship (Image 22), what I’m working on (Image 10), Scratched Meat (Image 11), an untitled photo of Shanko beside one of her female nudes (Image 38), an untitled piece (Image 36).

Images that include both “evil”/demonic elements combined with charged, sexualizing imagery include Bitchez Is Wack (Image 26). Spirits Bar (Image 13), Agoraphobia (Image 28), and a piece of simply entitled Women (Image 29).

So, here we are. Linda Shanko, the GallusMag of GenderTrender: a portrait of a woman who apparently believes “the thesis that ‘evil’ is a by-product of nature’s strategies for creation and that it is woven into our most basic biological fabric,” embraces “evil” and the demonic in her artwork, chose a pen name that’s connected to a violent woman in New York City’s history, and posted a photo of herself pointing a rifle at a camera. And add to that her hypocritical accusations that trans women (“transwomen are men” in her mind) fetishize cis women with their transitions, while at the same time she’s sexually fetishized and objectified women in her own artwork.

One certainly can’t deny that the human portrait of Linda Shanko is an interesting one in both a fictional and real-world sense. She certainly looks at us all down the barrel of a gun. 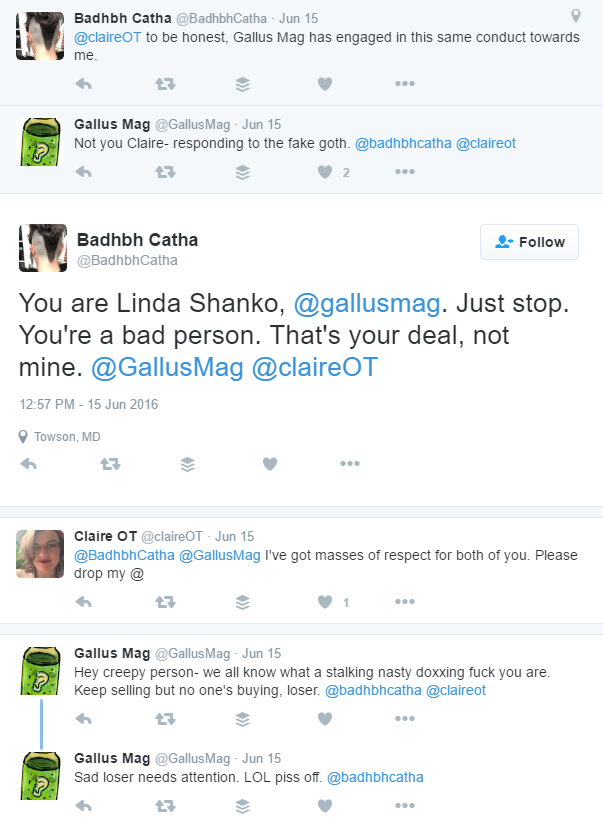