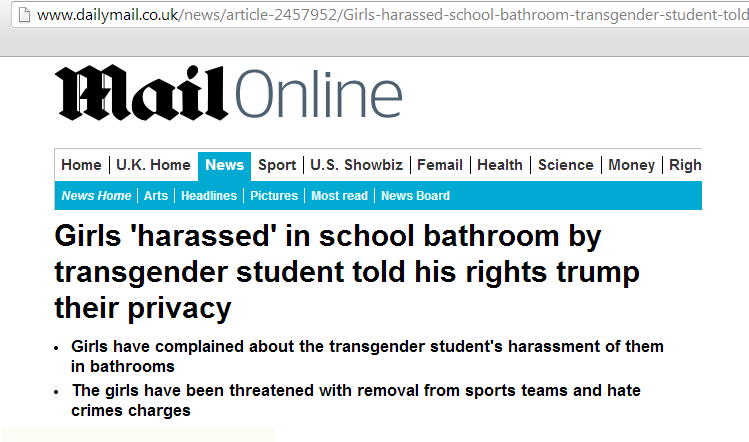 The story, exposed by the TransAdvocate as a lie concocted by right wing ideologues, elicited the following responses from the Daily Mail readers:

Give him a throat punch when no one is looking.

Tell it to use the boys room!

Is anyone surprised by this? What happened to the days when boys and girls were just boys and girls and went to school for an education and not to display their sexuality issues?

100% agree with the Pacific Justice Institute! This is disgusting and shameful. Society is breaking down as our morals decay, and these young girls are paying the price.

Why would any sane parent put up with this insanity for the cause of Political Correctness? Home school your kids good people…

Imagine that you’re the trans kid featured in these false stories. Imagine that you, the only out trans youth in your school, are the focus of this amount of vitriol. How would you handle being falsely cast as a predator and held up for international ridicule and scorn?

Fortunately, the Daily Mail has since removed the story after it was proven false: 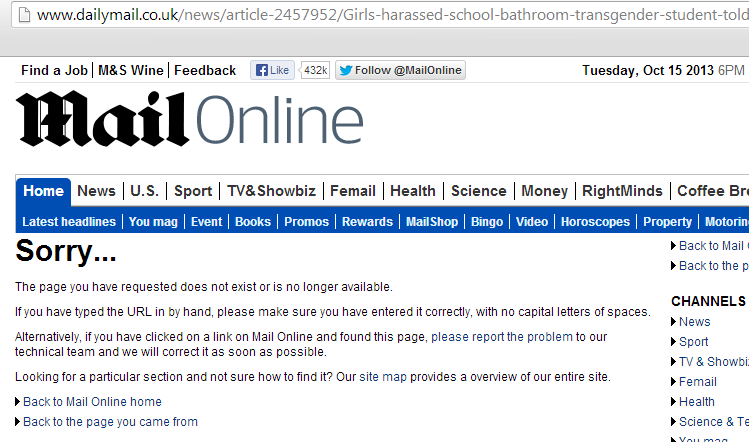 However, Fox News continues to report – as fact – that this trans youth is a predator and that the cisgender population is at risk.

The TransAdvocate will not reproduce the vile commentary of the Fox News readership. Suffice it to say, the level of animosity generated by Fox News and directed at this trans teen far exceeds the malevolence inspired by the Daily Mail’s false story.