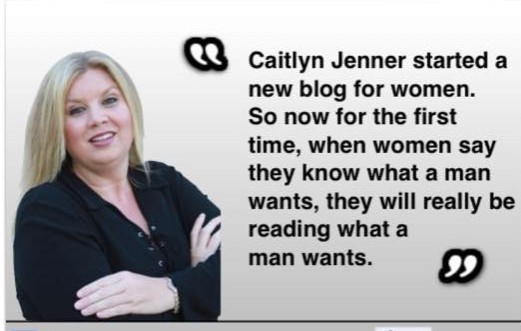 When criticized, she said:

“I appreciate your opinion but Caitlyn had 65 years exp being a man in a man’s world. She had male privilege. Has nothing to do with respect. Has to do with jokes. No one is off limits and I can’t censor my self. Expected some flak. We should be able to laugh at ourselves. I have plenty of Gay and Lesbian jokes so why are Trans offlimits?
Late Night Jokes.”

“Lenny Bruce, the infamous comedian, went through a lot to say what he wanted to say and in doing so helped pave the way for the rest of us comedians and uphold that Freedom of Speech thing in the Constitution……. #‎wontbecensored‬.”

It would seem that Wagner doesn’t know what censorship is. From Patheos:

Free speech is the right to speak your mind without government censorship and without fear of extralegal retaliation like harassment or violence. That’s all!

Free speech doesn’t include the right to speak your mind on any forum anywhere. The government may not prevent you from speaking, but private parties, like blog owners or corporations, aren’t required to let you use their property as your platform.

Free speech doesn’t include the right to be believed or to be taken seriously. People may mock, ridicule or laugh at what you say, or they may reject it outright.

And free speech doesn’t include the right to suffer no consequences whatsoever for your expressed opinions. As Facebook found out, if you say things that other people find abhorrent, they may boycott you, disinvite you or choose not to associate with you.

This is especially true in terms of comedy. As Michael Richards found out, a white comedian uttering racial slurs will severely hamper or end a career.

“Vicki Wagner what was the last black joke you told? Jewish joke? Please do let us know your favourites that you tell, because you don’t ‘self censor.'”

When it comes to comedy and racial jokes, context matters. Chris Rock can use of N-word because he’s African American. Marc Maron can make jokes about Jewish people because he’s Jewish. Wagner is a cis white lesbian. Wagner states “we should be able to laugh at ourselves,” but unless Wagner is trans, she isn’t laughing at “ourselves” but laughing at “them.” Trans people should be “off limits” for her the same reason white comedians making black jokes are off limits.

Beyond that, it’s really just pathetic to make fun of a vulnerable minority. For many visibly trans people (like myself), we’re already the butt of jokes daily. In the realm of comedy, it’s low hanging (cruel) fruit.